Some bakes come about because I did a "reverse engineering" type of thought process. I was clueless about what to bake for my dad's and uncle's birthdays so I asked them what type/flavour of cake they would like. As usual my dad just said anything will do. Uncle said he wanted butter cake. My mind went..."Hmm...butter cakes can be quite rich so coffee may complement it well. Or perhaps mocha...Ooo Mocha bear!...and Milk bear!"

So here they are 😊 It was a good excuse to practice my templating method for making character marshmallows. I am excited to announce that I will be writing the 7th book in our Creative Baking series, Deco Marshmallows some time next year! My schedule is pretty full this year so I can only do some limited writing or brainstorming, while I clear my schedule of classes so I can concentrate on writing and making marshmallows for the book. This templating technique is much better than the traditional piping on bed of cornstarch method as you can see the outlines to pipe clearly, which is great for those who are artistically challenged. It also uses a lot less cornstarch and does not have the problem that piping on bed of cornstarch has --- the marshmallow may stick to the piping tip/bag instead of the baking tray as you pipe so you need to start over when that happens.

Just to share some photos of the piped marshmallows before they were dusted! 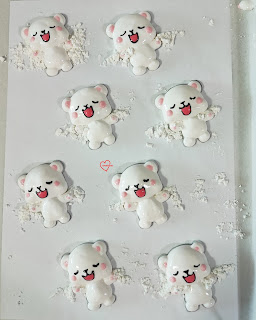 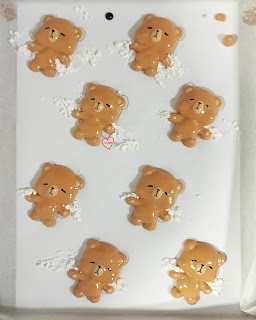 Mocha bear
While making Milk was a breeze and I successfully did it in one try, Mocha was challenging and it took me 3 tries. That's because I tried to flavour/colour it mocha. Vanilla base is easy but addition of flavourings other than extracts can be tricky as it messes with the consistency sometimes. I added instant coffee and cocoa powder at first but seems like due to the high fat content of the cocoa powder I am using, it is problematic for the meringue. Thank God I managed it eventually!
Recording the recipe for Mocha marshmallow for reference in case I forget!
Ingredients:
50g egg whites
130g caster sugar
54g light corn syrup
40g water
1/8 tsp salt
6g fish gelatin powder (may use other sources. This is the only one where different religious groups have no issues with).
1/2 tsp Kahlua coffee liqueur
23g ice water
1/2 tsp chocolate emulsion (emulco)
1/2 tsp coffee emulsion (emulco)
White, orange, yellow, espresso gel colouring as needed
Steps:
You may refer to this post as reference. I tweaked it so I don't follow it exactly now although I started out following it. I can't reveal too much technical details due to the book as I have a contract to honor with the publisher. For this flavour, I brought the syrup temperature higher to about 115C.
Here's a video of Milk and Mocha in squishy action!
Don't worry about the wrinkles on the bear faces. They were there because I squeezed a little too hard 😅. The wrinkles disappear after letting the marshmallows rest for several seconds more, as you can see in my next post for using these bears as cake decoration!
with lots of love,
Phay Shing
Phay Shing at 19:00:00
Share