My dad's and uncle's birthdays are pretty close to each other and because we have 2 separate celebrations, I decided to make 2 separate but related bakes for them. Both are apple themed. For my dad's small home birthday celebration, I revisited an old bake back in 2014 but with filling this time and placed in an edible basket! 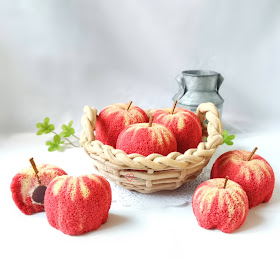 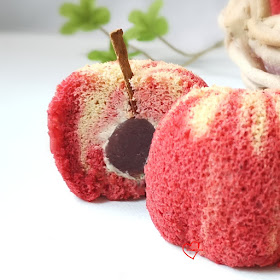 A close up view of the cross-section of the insides! Apple black tea diplomat cream and apple dragonfruit black tea agar jelly!
It actually took me 2 tries to get the basket right. The first try was my default construction cookie recipe that tastes awesome and it's easy to work with as rolled cookies. But it was difficult to handle for weaving as the dough kept breaking, and the basket fell apart when I placed it upright to dry it out a little more in the oven. Way too fragile due to the microcracks induced by the compression forces as the weaved dough expanded slightly during baking in the oven.
I had a think and remembered that I had a biscuit dough recipe which has a texture and elasticity similar to bread dough, making it easier to handle for weaving and hopefully, remains sturdy enough after baking to keep its shape and hold the apples! This biscuit happens to be my iced gems biscuit base. I tweaked it slightly to include a little cinnamon and cocoa powder for colouring, and reduced the baking powder to minimize expansion of the dough which may cause cracks due to the weave pattern. Thank God it worked this time!
You may refer to any basket weave tutorial for circular baskets on how to weave. Pinch seal the ends of each rope of dough when you run out of length. Use a metal bowl that is wrapped in aluminium foil as your work surface. Remember to grease it first before slapping on the dough. 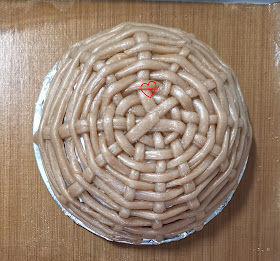 I didn't take photos of the weaved rim and handles because it was late and I was a little miffed at having to rebake😂. I used small hemisphere slicone moulds as the work surface for the handles. The various parts were glued together using royal icing. 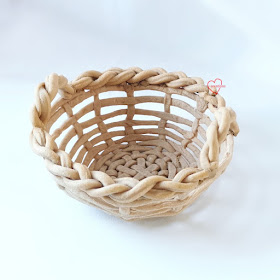 Ta-dah! My edible wicker biscuit basket!
Recipe for biscuit basket
Ingredients:
140g plain flour
1/2 tsp baking powder
20g icing sugar
1/8 tsp salt
1/8 tsp cinnamon powder
1/4 tsp cocoa powder
48g unsalted butter
50g milk (use less or add more as necessary)
1/4 tsp vanilla extract
Steps:
1. Sift together all powdered ingredients into mixing bowl. Add vanilla extract to milk.
2. Rub in unsalted butter into powdered ingredients until it resembles fine breadcrumbs.
3. Add milk a little at a time until a ball of dough forms. Cling wrap and let it rest for 30 minutes. This will help the dough to relax and make it more pliable.
4. Prepare the baking tray/ moulds, lining with parchment or foil and greasing as necessary. Preheat oven to 165C.
5. Portion and roll out the ropes of dough as needed for weaving. Weave the basket, pinch sealing portions where you need to join the ropes.
6. Bake until slightly golden brown. This bake time can vary depending on size of the weaved portion. Can range from 15 to 25 min. Cool completely before assembling with royal icing as the glue. 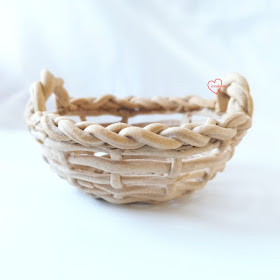 The basket was stored at cool room temperature in airtight condition.
I prepared some apple dragonfruit black tea jelly and measured 1 tsp of it for each apple, set in cling wrap. You may refer to this post for the jelly recipe. 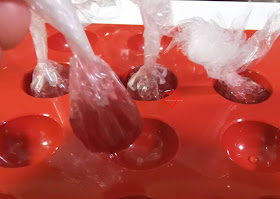 Refrigerated until ready to fill the chiffon apples. It would be perfect if I have moulds of the right size but I didn't so this less ideal cling wrap trick will have to do.  You only need to prepare a small quantity of jelly since each apple only needs 1 tsp worth.
Prepare the apple black tea diplomat cream and store it in a piping bag in the fridge until ready to fill the apples. Please refer to this post for the recipe. You will only need a little cream and 1 egg yolk portion recipe is more than enough.
Apple black tea chiffon cake recipe for "apples"
Note that I increased the sugar content in the meringue to improve its stability compared to my old recipe in 2014. This makes it easier for patterning the apple design.
Ingredients (makes about 9-12 cupcakes) :
Egg yolk batter
3 egg yolks
42g vegetable or canola oil
42g apple black tea
3/4 tsp vanilla extract
1/4 tsp cinnamon powder
1/8 tsp salt
60g cake flour
1/4 tsp baking soda (to neutralize acidity of tea)
1/2 tsp kocha powder (black tea powder)
Colouring for yellow and red batters
Yellow gel colouring
1/8 tsp red powder colouring
Meringue
4 egg whites
1/4 tsp cream of tartar
80g caster sugar
Steps :
Kindly refer to this post for the detailed steps because it is too long to type😂. The difference is I simplified the use of many sources of colouring because some of them impart a flavour which I didn't want as it will detract from the apple black tea base that I intended it to be. 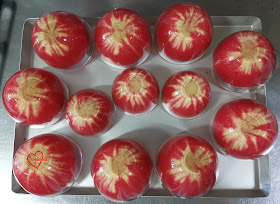 Inverting the glass bowls to cool the chiffon apples.
Carefully unmould the cakes by hand when cooled totally. Use a piping tip to mark out the hole and then use a toothpick to dig out a portion of cake. Don't throw the cake cutout, instead pipe in a little cream. Insert a ball of jelly and coat with more cream.  It should look like this: 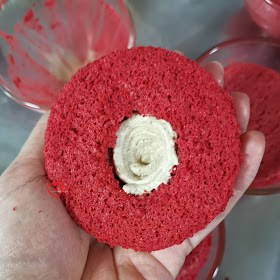 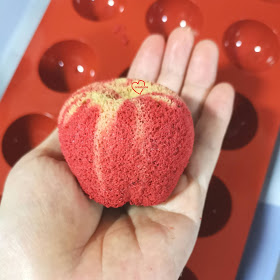 Ta-dah! Shaped apple. The shaped portions may tend to bounce back to its original shape. Just keep pressing or inserted into the mould for a longer time and the shape should hold better.
Insert a sliver of cinnamon as the apple stem and you are done! 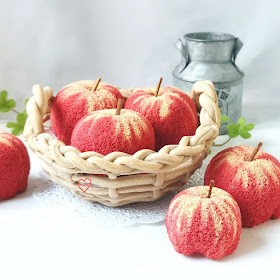 With lots of love,