This was an accidental flavour that is so good that picky cake eaters like hubby, gave a thumbs up, and so did my elder kid who appreciates desserts with complementary multidimensional flavours and textures. Presenting my trial bake for apple black tea cake! 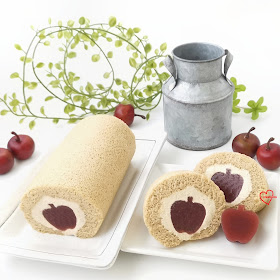 This cake consists of a soft and moist apple black tea chiffon sponge, same flavour of diplomat cream, and a crunchy apple black tea dragonfruit agar jelly.  I brewed a concentrated tea and used it as a base for making the various components. I originally planned for a hojicha cake but Phoon Huat was out of stock for hojicha powder so I settled for kocha, a black tea often used to make bubble teas. I thought just kocha alone would be one-dimensional. And since I am planning an apple themed bake, I thought why not make it apple black tea! The flavour is refreshing with some fruity tartness from the apple, and sweet aroma from cinnamon and kocha. The addition of dragonfruit was an afterthought as I wanted to colour the jelly naturally for a reddish tinge. But this turned out necessary as the fine dragonfruit seeds add a nice crunch to texture which complements the crunchy agar and soft cake and cream.
This is a long post as I am recording it for my reference too.
Apple black tea
Feel free to upsize or downsize, or change any ingredient quantity according to taste. You should aim for what you want the jelly to taste like (except that it is unsweetened) as your base tea that you will use for all ofher components later on. You may store excess in fridge or freezer. Recipe is adapted from here.
Ingredients:
3 apples, peeled and grated
6 cups of water
1/2 tsp cinnamon powder
1/8 tsp ginger powder
1 tbs (6g) Kocha powder (I bought from Phoon Huat)
Steps:
1. Bring water, tea powder, cinnamon and ginger to a boil. Turn the heat down and simmer for 5 to 7 minutes.
2. In the mean time, peel and grate the apples. Add grated apples to the tea mixture and simmer for another 3 min.
3. Remove from heat at let the ingredients steep and cool to room temperature. Sieve before using or storing.
Apple black tea jelly
This is a very small portion for my trial bake so feel free to upsize it for larger cakes or swiss rolls.
Ingredients:
150g apple black tea
20g honey (feel free to adjust according to taste or change to sugar of choice)
25g pink dragonfruit puree, optional if you don't need extra crunch (I blended it so seeds are broken to smaller bits)
2-3g agar powder (depending on how firm you prefer)
Steps:
1. Place all ingredients into small saucepan. Bring to a boil, stirring constantly to ensure agar powder is completely dissolved.
2. Continue boiling and stirring for a minute more.
3. Pour into lined tray or silicone mould/tray until at least 1cm high. Chill in fridge until firm.
Apple black tea diplomat cream
This is again very small quantity. Feel free to upsize it. Excess can be frozen and eaten like ice-cream.
Ingredients:
1 egg yolk
20g cornflour
3g kocha powder
A pinch of salt
15g erythritol (or sugar of choice, adjust amount according to taste)
75g apple black tea
25g heavy cream
7g unsalted butter
50g whip topping (or stabilized dairy whipped cream)
Steps:
1. Heat apple tea and heavy cream in a small saucepan until you are able to feel the heat rising from the pot when you place your hand over it.
2. In the mean time, whisk egg yolk, cornflour, sugar of choice, salt and kocha together until a thick paste forms.
3. When apple milk tea is warm, pour it in a thin stream into the egg mixture while whisking the egg mixture constantly. Pour everything back into saucepan.
4. Heat over medium low heat while whisking constantly. Once the custard starts to thicken, remove from heat and whisk vigorously until smooth. Place saucepan back on heat and continue to whisk and cook until thickened further, able to hold a firm peak (peak with a curl at the end) . Remove from heat.
5. Add unsalted butter and whisk until well combined. Transfer to bowl and press cling wrap on surface. Chill in fridge overnight or at least a few hours.
6. Whip up the whip topping until stiff peaks. Take the pastry cream/custard out and whisk it to loosen the texture. Fold the whipped cream into the custard. Transfer into piping bag and store in fridge until ready to assemble.
Apple black tea chiffon cake
Quantity here is enough for a mini 7x7 inch swiss roll plus one or two 5cm cupcakes. Feel free to upsize to a 2 egg yolk recipe for a 10 x 12 inch swiss roll.
Ingredients :
Egg yolk batter
1 egg yolk
5g caster sugar
14g vegetable oil
17g apple black tea
1/4 tsp vanilla extract
1/8 tsp cinnamon
1/2 tsp kocha powder
A pinch of salt
23g cake flour
Meringue
One and a half egg whites (about 55g)
25g caster sugar (more if you have sweet tooth, up to 35g)
1/8 tsp cream of tartar
Steps:
1. Line tray with parchment paper or teflon sheet. Preheat oven to 170C.
2. Prepare egg yolk batter. Whisk egg yolk, salt and sugar together until pale and thick. Add oil and whisk until smooth. Add apple black tea and vanilla and whisk until combined. Sift in flour, cinnamon and kocha powder gradually. Whisk until no trace of flour is seen.
3. Prepare meringue. In a clean metal bowl, beat egg whites with cream of tartar until firm peaks, gradually adding in the sugar once the egg whites are foamy.
4. Quickly but gently fold meringue into egg yolk batter in 3 batches. Pour into cupcake case and prepared swiss roll tray.
5. Bake at 170C for 12- 14 min or until skewer comes out clean. Immediately flip onto fresh sheet of parchment paper and roll it up to cool completely.
Assembly
1. Cut out apple shapes from the jelly or any other shape you like with a cookie cutter. I used a small 1 inch apple cookie cutter for this mini roll.
2. Unroll the cooled cake and pipe/spread a thin layer of diplomat cream.
3. Place a row of apple black tea jelly cutouts upside down in the middle of the roll as shown below. 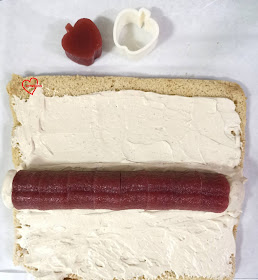 4. Pipe a thin layer of cream around the jelly, smoothing it out with a spatula as necessary.

5. Carefully roll it up and refrigerate for at least a few hours before attempting to slice it.

I wasn't sure how this would end up tasting so I was pleasamtly surprised that it was really refreshing with all the subtle complex flavours coming out when you take time to savour all 3 components together.