I often get requests for unicorn macaron carousels. The next popular design and theme would have to be animal train macarons. I have made these quite a few times and didn't post some of them on the blog because it's more or less a repeat. But this is the first time I am making it in girly pastels and using a new Swiss method recipe that many have been trying in the macaron Facebook group that I am in. It produces smooth and shiny surfaces and supposedly dries quite fast after piping the batter. I got really curious and decided to try. Many thanks to Audrey Goh for sharing her experience and recipe, and a few other ladies for sharing their experience with using this recipe 😘. I have learnt much and am enjoying the learning journey that never ends!

Although I have made macarons using Swiss method quite a few times last year, I have never seen a recipe that recommends splitting the egg white portion for Swiss method. This is the usual practice for Italian meringue method that I usually use for large batches. I love having the egg whites split into two batches because there will be an almond paste (otherwise known as mass in the Italian method) which I can add colouring to Before the meringue is added in. This allows for colour adjustment to be made before meringue is added in, reducing the risk of overfolding should you need to adjust the shade of the colour along the way. I was really excited to try out this new method! Presenting my girly version of animal train macarons! 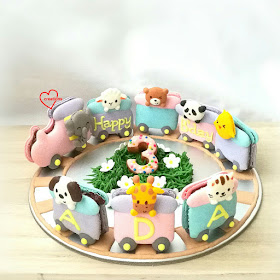 I made the mini animal heads using my recent modified French method recipe as I needed only a small amount of batter that needs to be split into many colours. You may refer to this post for the recipe. Just to share photos of the process... 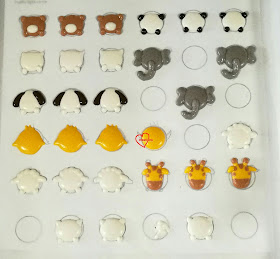 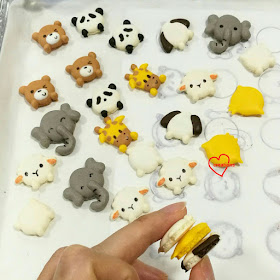 Baked shells. See how tiny they are! 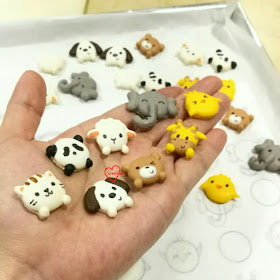 I can easily fit many of them on my hand! The facial features are added on using edible marker.

The original recipe that Audrey shared had the egg white portion in ml. I converted into grams for your convenience. If you need to scale up the recipe, I suggest that you use the conversion ratio of 1ml egg white = 1.03g egg white. Aged egg whites are recommended although not absolutely necessary. I made the animal train locomotive and carriages concurrently with a unicorn carousel frame. Here's a picture of the carousel I made. Lighting that day was much better so I could take a better photo than the train macarons. See how smooth the surfaces are! 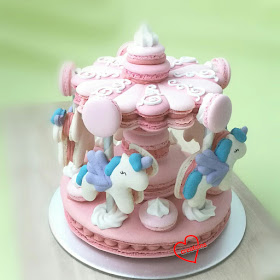 Updated recipe (15/03/2020)
After working with Swiss method for some time, I have changed the default recipe to one that uses less sugar without rice flour and cornflour replcements.

Note: add the icing sugar, caster sugar, salt and cream of tartar into the egg whites for the Swiss meringue to whisk over double boiler.

Steps:
1. Prepare baking tray with template and parent paper. Set oven rack to lowest or second lowest position. The train template can be found in my Creative Baking: Macarons book.

2. Make almond paste. Sift together almond and icing sugar. Add egg whites and mix well to form a thick paste. You may split this into various batches for colouring. Use gel food colouring.

3. Prepare Swiss meringue*. Place egg whites, cream of tartar (if using) and caster sugar into a heatproof bowl. Briefly whisk all ingredients together. Place the bowl over a simmering (not boiling) pot of water. Make sure the water does not touch base of bowl. Whisk the egg whites and sugar until temperature reaches 45-52℃**. All the sugar should dissolve and mixture should look white, opaque and smooth. This takes about 5-10 minutes. Make sure the temperature doesn't rise too fast or the sugar may not have time to dissolve completely. Once temperature is reached, immediately remove from heat and use an electric mixer to beat until firm peaks form***. This takes about several minutes. Use medium speed to beat. 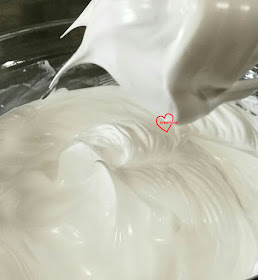 * Hannah, from the same macaron group, finds that keeping the egg whites as a single batch (77g) and using all of it to make the Swiss meringue eliminates the problem of lopsided shells that she experienced when she uses this split egg white method. If you experience lopsided shells, you can try this method to see if it helps. Basically you make the macaron shells like regular French method where dry ingredients are added into the meringue during macaronage, instead of a thick almond paste.
** Heat egg whites to 45-49C if using all egg whites in the swiss meringue to avoid making a meringue that is too dry, which can result in rough (not smooth) shells and possible overfolding to get your regular consistency.
Heat egg whites to 50-52C if only using some of the egg whites for making swiss meringue and reserving some egg whites to make the almond paste. You need a drier and stiffer Swiss meringue than previous example.
*** If using all egg whites for Swiss meringue, meringue should be whipped till a peak with a large curl at the end. When you run the whisk in the meringue , you should be able to feel some resistance (not too soft or it will be under whipped and prone to breaking down fast).
If using only part of the egg whites for Swiss meringue, whip till a peak with a small curl at the end. This should be firmer than the previous example as you need to compensate for the addition of unwhipped egg whites in the batter. When you run the whisk in the meringue, you should be able to feel more resistance than previous example.
It is important in both cases to whip the meringue sufficiently so that it remains stable for a longer time, but at the same time not so overwhipped that the meringue becomes too dry, stiff and inelastic. I know this takes some practice but you will get better with time!

4. If you have split your almond paste into more than one batch for various colours, portion the meringue accordingly. Use the ratio of weight of meringue = 0.55 x weight of almond paste for each colour. Stick the corners of the parchment paper down with some meringue or macaron batter.

5. Fold meringue into almond paste in three additions. Make sure that the mixture is homogeneous before adding more meringue. Use the fold and press motion to incorporate the meringue. You may refer to this post for a video tutorial on how to fold the batter. Fold until batter is able to flow into continuous ribbon from the spatula. Transfer batter into piping bag and pipe the shells. 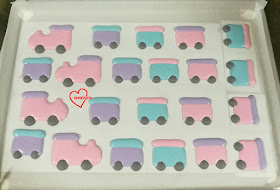 6. Rap the tray hard several times to release trapped air bubbles. Pop any stubborn air bubbles with toothpick. There shouldn't be many with this method. Dry the piped shells in air-con room or under a fan until a thin membrane forms. This shouldn't take too long but it depends on humidity. It took about half an hour to an hour for me in air-conditioned room.

7. Bake in preheated oven at 150℃ for 10 minutes followed by 120-130℃ for another 15-20 minutes until feet doesn't appear wet. Cool completely before removing parchment paper away from the shells. Note that baking time and temperature varies from oven to oven so use what is suitable for you.

Update (25/7/19): I have revised the baking temperature a little as the original suggested temperature may be too low for some people and you get feet separated from the top of the shells. To overcome this, use a baking temperature of 150°C instead of 140°C. If this still doesn't work, try preheating to 170-180°C but reduce temperature to 150°C immediately after baking tray is in the oven. Baking your piped tray of macarons on top of another baking tray that is preheated with the oven (double panning technique) also helps to eliminate this problem along with higher initial baking temperature. 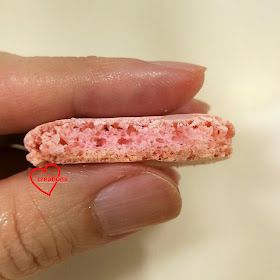 See how full and fluffy the insides are! 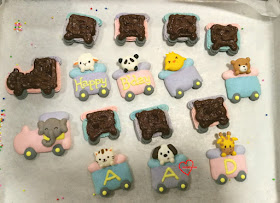 I am documenting this recipe for reference as many people may want to refer to it from the macaron group too. Do give this a try. I love the smoothness of the batter and the ease with which it pipes. It is naturally more stable than French method as the egg whites are partially cooked but less scary than Italian method as you don't have to deal with boiling syrup. I will most likely give it a try again but without splitting the egg whites to see if it makes any difference for me but probably not so soon as I am still in the midst of writing my next recipe book on Deco Choux Pastries.

For those of you who are interested, the train tracks and grass patch are made from royal icing piped onto a cakeboard. The number "3" is a brown sugar cookie covered in royal icing and rainbow sprinkles.

Update 6/2/19: Those of you who are interested in making a reduced-sugar version of the Swiss method, you may have a look at the recipe here.