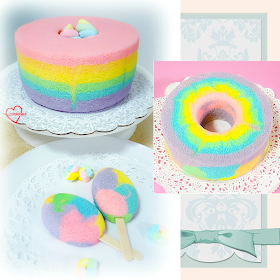 Just sharing some of the experiments I had tried with Rainbow Chiffon over the months, Rainbow Swirls, Rainbow Tiedye and Rainbow Paddlepop Chiffon Cake. Which do you like? =) I was really thankful my friends trusted me enough to let me experiment with their cakes =p.

I had a good laugh with the Rainbow Swirls (top left), as it was so straight! I was hoping to get something more 'fancy', but I'm so used to making straight lines, the result was quite funny. I made the Rainbow swirls by first making a Rainbow Chiffon Cake (now in Creative baking: Chiffon Cakes), then using chopsticks to run from inner tube across and then up at 3 sides, then from outer tube, down and inwards at 3 sides (alternating). 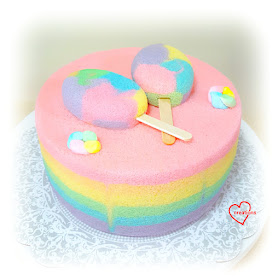 The Rainbow tiedye (on the right) was targeted at swirls at the base of the tin. First I piped concentric Rainbow colored circles as per Chiffon cake Rainbows, then dragged a chopstick from inner tube outwards at 3 sides, and outside in at 3 sides (alternating). I was happier with this one =). The sides I just did a Paddlepop Rainbow design as I was too tired by then =p. This was for a mummy and was pretty enough on it's own without a topper. 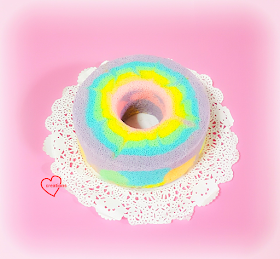 Thankful all the Rainbow Chiffon Cake variants were well-received! Hope you all had a wonderful Mother's day!

With lots of love,
Susanne 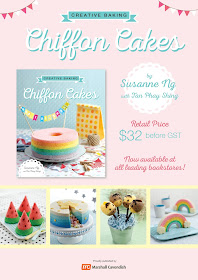