I had some extra batter while rushing out a batch of bears with beer mugs macarons so I decided to make something simple and cute. So here are my Pusheen cat macarons done the lazy way! No 3D pop up features using macaron batter and no royal icing add-ons. All details are added on using edible marker! 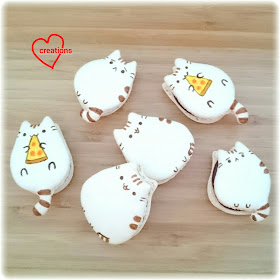 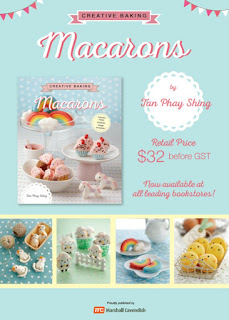 Steps:
1. Prepare mass. Sift almond, icing sugar and white powder together. Add half of egg whites and mix well with spatula.
2. Prepare Italian meringue. Beat remaining egg whites in a clean metal bowl on medium low speed until soft peaks while boiling caster sugar and water until 115°C without stirring. Increase mixer speed to high and carefully pour syrup into egg whites. Beat for another 10 minutes or until cool and stiff glossy peaks form.
3. Fold Italian meringue into mass in two additions until batter flows in a slow moving lava-like manner. Check the video on how to fold and check consistency.
4. Transfer to piping bag and pipe the shape of Pusheen onto baking tray with template under baking sheet. Bang the tray hard a few times to release trapped air.
5. Rest the shells until dry to touch (about 1-2 hours). Bake in preheated oven at 130°C on lowest rack for 17-22 minutes or until feet no longer wet, rotating tray halfway. Cool completely before removing shells from baking tray. 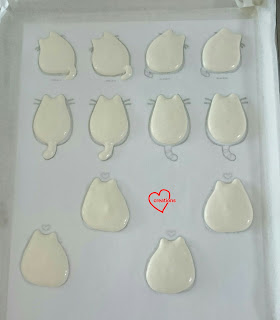 Piping the cats! Toothpick is used to pull the ears. 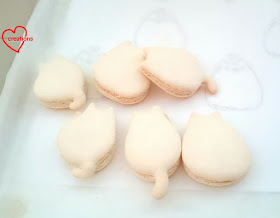 I only had time to decorate the shells almost a week after baking and even then, I did it in a rush as I had other more important things to work on since these cats were for fun.

Just a tip here on how to create more hues than the number of coloured edible markers you have. The light brown shade of the pizza slice crust was created by using a brown marker to dot the surface, and then quickly using the yellow marker to colour over. Remember not to accidentally smudge the features. I love the Wilton fine tipped marker! Much finer than the Americolor set I have although the latter has a wider range of colours. 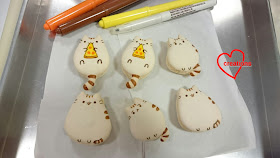 Someone saw these shells I posted on Facebook and requested for them! I filled the cats with dark chocolate ganache. Butter + heavy cream : dark chocolate ratio used is 1:2. Added a pinch of salt and some vanilla bean paste to enhance the flavour. Briefly, 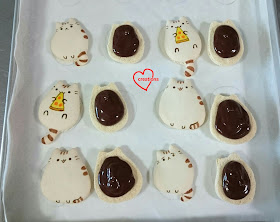 Feedback was that these were yummy and less sweet than some macarons sold outside :).

Checkout my other version of Pusheen macarons over here!