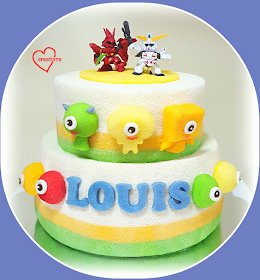 This is another cheerful creation which made me smile making! I enjoyed making the cute Monsters/Aliens very much! I made a Rilakumma cake for him last year. This year my jaw dropped when I heard he wanted a Gundam cake! Thankfully there was a scenario in which Gundam triumphs over the Monsters and Aliens haha, so this cake was inspired by it. I only had to make cute Monsters/Aliens popping out of the cake, and Gundam triumphs over them with the help of toppers haha!

For this cake I actually tried something rather risky out that is to create 2-Colour Stripes, yellow and green of similar width, and on both tiers! You can imagine how nervous I was. It is even harder than doing the rainbow chiffon because you have to gauge the height and thickness of each layer (including the white) correctly. The expansion of the last layer on top usually can’t be controlled well. I was super relieved the yellow and green layers came out all right!

I used the cheerful palette of lime green, yellow, orange, cobalt blue and red for the Aliens. The simpler ‘lower level’ Monsters were simpler, baked from roundish cake pops molds. For the higher level Monsters, I did a bit of carving and added in bodies and facial features.

My friend shared the kids loved the cake! Some had 4 servings! Wow.

With lots of love,
Susanne