I have a request for Rilakkuma macarons with caramel filling. The timing of this request coincided with my Mickey and Minnie caramel macarons so I could make these two batches together! 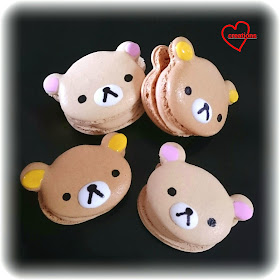 Here's the template I used for piping Rilakkuma's head. 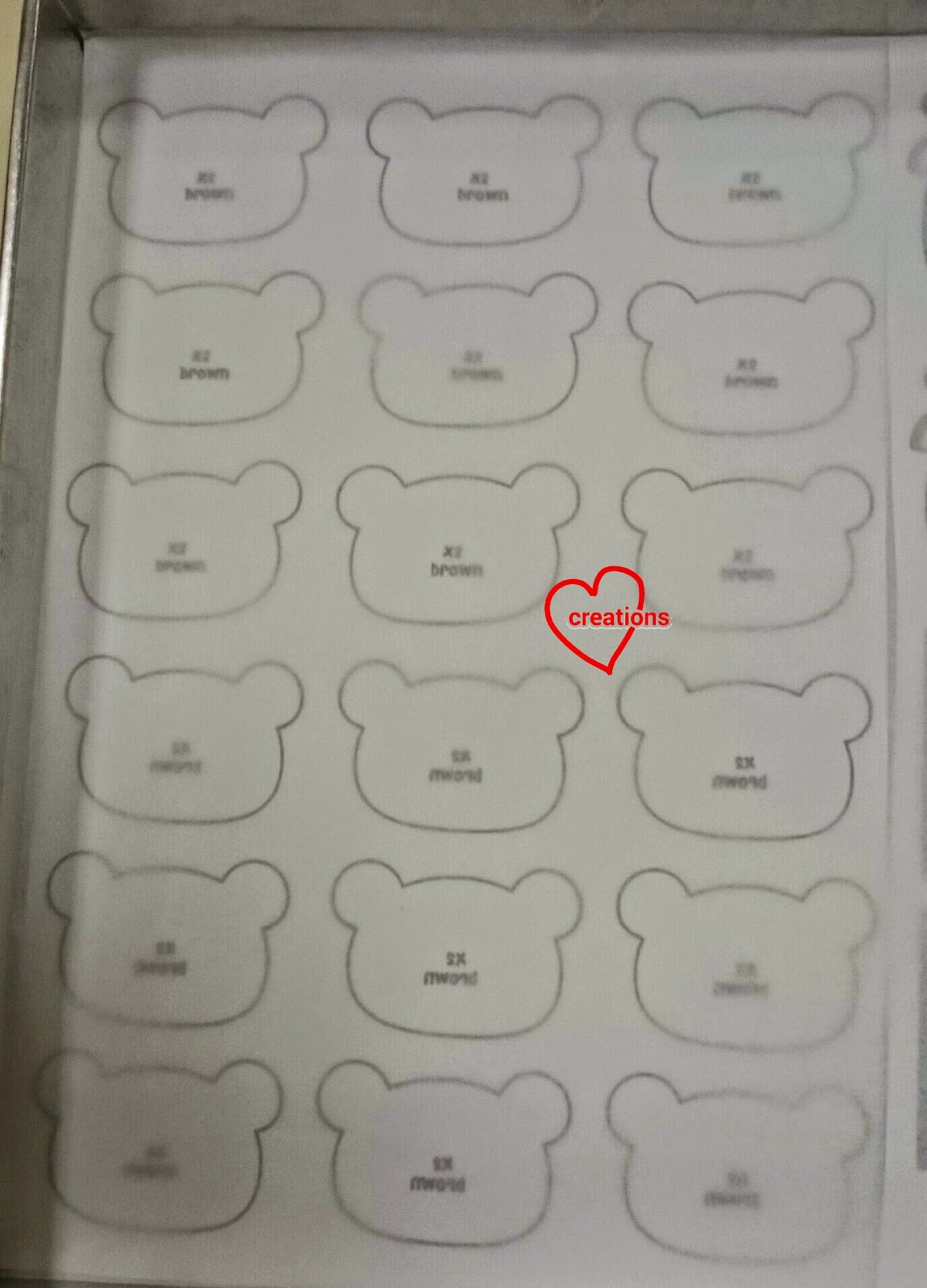 The instant Earl Grey and cocoa content I used is quite low in this recipe as I wanted the shells to be naturally coloured and look as close as possible to the original Rilakkuma. Feel free to add more tea powder or cocoa if you wish to have a stronger flavour. I bought this instant Earl Grey powder from Yamakawa. 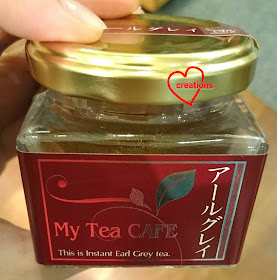 Steps:
1. Divide the almond and icing sugar into two portions for cocoa and Earl Grey flavours. Sift the almond, icing sugar and cocoa or earl grey powder together. Add 20g of egg whites into each mixing bowl and add the extracts if you wish. Here's how the masses look like...

2. Prepare the Italian meringue. Heat up caster sugar and water in a small saucepan without stirring while beating the rest of the egg whites in a clean metal bowl. Be careful not to beat the egg whites beyond the soft peak stage. Reduce mixer speed if necessary but don't stop moving the egg whites. When syrup temperature reaches 115°C, take the saucepan off the heat. Turn mixer speed to high and slowly pour the syrup into the egg whites, avoiding the beaters. Continue beating for another 10-12 minutes until the meringue is stiff/firm, glossy and cooled.

3. Divide the meringue into two equal portions and fold into each mass in two additions. Use a fold and press motion. The batter is ready when it is able to fall off the spatula in an almost continuous manner. Do watch my video tutorial to have a better idea of the right consistency. I left about 2tbs of meringue unused for each flavour.

4. Transfer the batter into piping bags fitted with a 5-6mm round tip. Pipe out the shells, remembering not to fill the template completely as the batter will spread a little. 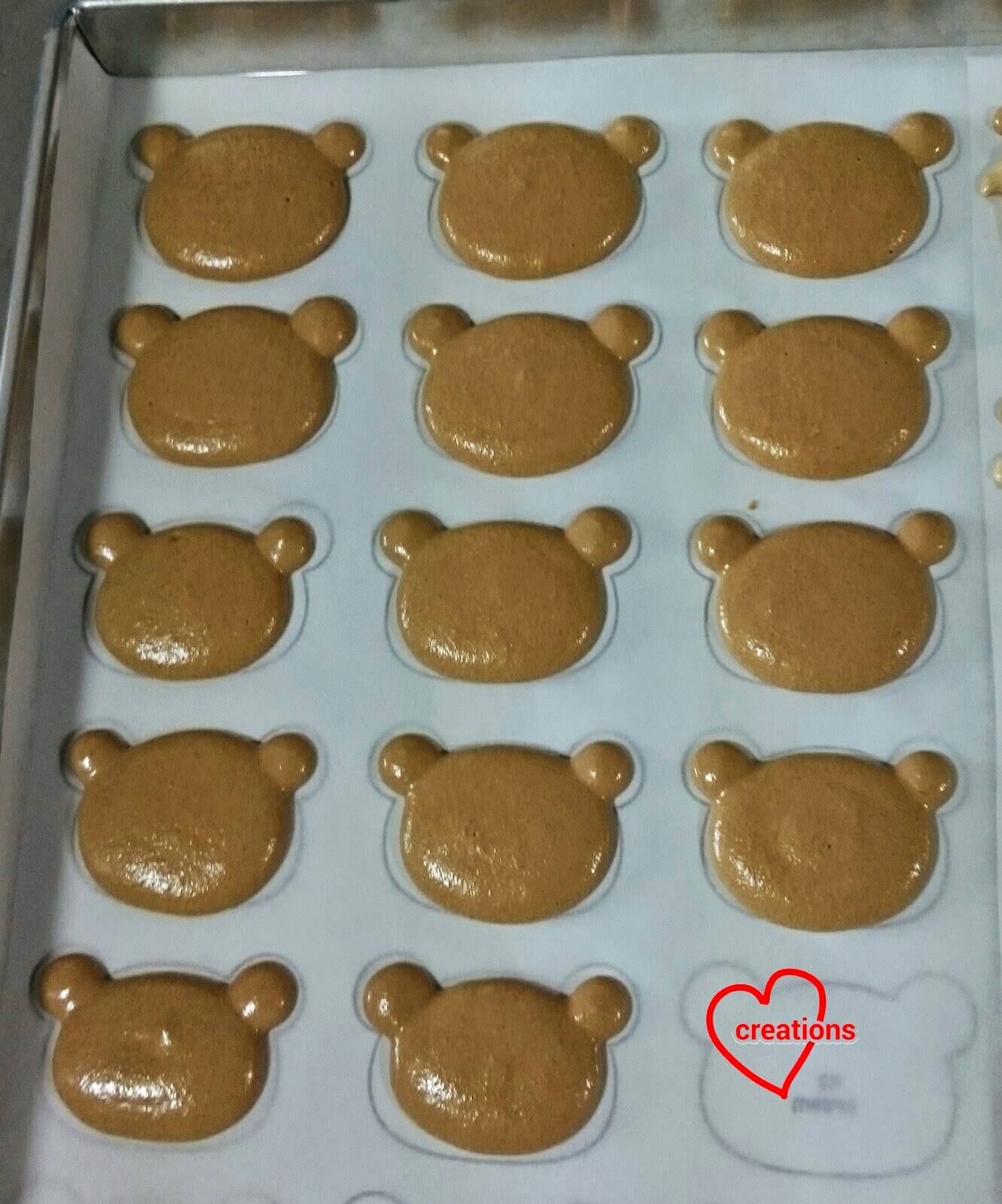 5. Tap the tray to release trapped air. Dry the shells in an air conditioned room for about 2 hours or until the shell is no longer sticky to touch.

6. Bake at 125-130°C with the rack at lowest position for 20-25 minutes or until shells can be easily lifted off the baking sheet. Let the shells rest on the tray for 5 minutes before attempting to remove. 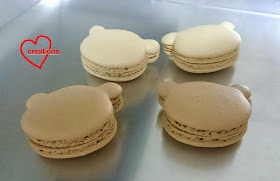 Ice the shells with royal icing. I used natural source of colouring for yellow and pink. You may wish to draw on the face with edible marker like I did or use black coloured royal icing.

After the icing has dried (I left mine to dry overnight) you may fill the shells with whipped caramel. 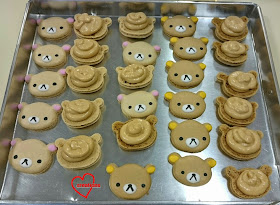 Refrigerate the assembled macarons for at least 24h before consuming.

I played around with some leftover batter so keep a lookout for cute horse and giraffe macarons in the near future!