Hubby bought some honey pear tea jam on offer so I made some chiffon cake with this flavor. Before I began, I thought why not make them pear shaped. It will be really cute and fun! Here's my chiffon pears, big and small :). 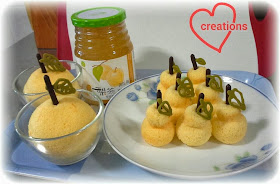 I baked the big pears in the glass bowls that they are sitting in and the little ones in egg shells. Since the batter is already nicely golden yellow in color, there is no need to add any food coloring to make them look more pear-like. I adapted the recipe from Yuzu chiffon cakes, which are more common than honey pear tea.


Steps:
1. Dissolve pear jam in hot water. Set aside to cool.
2. Preheat oven to 160°C
3. Whisk egg yolks and caster sugar until well combined. Add in oil, followed by pear jam dissolved in water. Mix in vanilla essence.
4. Whisk sifted flour and baking powder bit by bit until there is no trace of flour.
5. In a clean bowl, beat egg whites and cream of tartar with an electric mixer. When soft peaks are formed, gradually add in sugar and beat until stiff peaks are formed and the bowl can be overturned without the meringue falling out.
6. Add 1/3 of the meringue into the egg yolk batter and mix well. Fold in gently but quickly the rest of meringue in 2 additions until there is no trace of egg whites. Tap the bowl a few times on the table to release any trapped air bubbles in the batter.
7. Spoon batter into round-bottomed glass bowls (for the big pears) and egg shells* (for the small pears). Fill the glass bowls until they are about slightly more than half full and the eggshells until they are about 1/2- 2/3 full.
8. Bake for 15 minutes, then lower the temperature to 150°C for another 10-15 minutes.
9. Let the cakes cool completely before unmolding by hand. Store the cakes in an airtight container to prevent them from drying out.
10. Shape the small pears by wrapping each cake with cling wrap and tying a rubber band about 1/3 from the top as shown in the picture. Leave the rubber band on overnight. 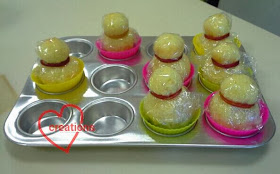 11. Melt some chopped white compound chocolate over a double boiler and add in some green tea until the desired shade of green is reached. Keep stirring the mixture with a spoon until it is smooth. Transfer the green tea white chocolate into a piping bag with a No.3 Wilton piping tip. Lay out some biscuit sticks on a baking sheet and pipe leaves onto the sticks. When the chocolate has set, gently peel off the sticks. If the leaves break off the stems by accident, you may melt some milk chocolate to "glue" them back or use Nutella if you are feeling lazy. 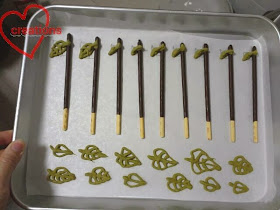 I find the flavor of the honey pear tea in the cake not as strong as Yuzu even though the recipes are similar, probably because the honey pear tea jam is milder in flavor to begin with. Nevertheless, my neighbors had some of these and thought they are really cute!