Happy New Year! To kick-start 2019, I have decided to share a video tutorial on how to pipe hemispherical macaron shells as many of you were interested after seeing my macaron tea set. The possibilities are endless when it comes to creating various things with such shells, such as hedgehogs from my Creative Baking: Macaron Basics book, turtles, ladybugs, chickens, watermelons, monsters and solar system. I created Chinese New Year themed teacups this time round with hemispherical macaron shells 😊 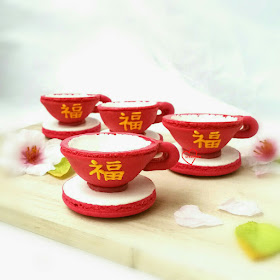 Change the character to 囍 and you can use it for tea ceremony at Chinese weddings!

I am also taking this chance to share how I create red macaron shells without using a whole lot of artificial red food colouring. I am using the Swiss method recipe shared by Audrey for this creation. You can read about it in this post as well. Natural sources of food colouring that I like to use for creating red macaron shells are red yeast rice powder, raspberry powder and beetroot powder. I use either red yeast powder alone or a combination of red yeast and raspberry or beetroot powder. Natural sources tend to impart an earthy tone so your shells won't end up bright neon red. Red yeast rice powder doesn't impart any flavour whereas raspberry does. Beetroot powder also may impart a faint earthy flavour. If you aren't able to get any of these natural sources or food colouring, add a little brown gel food colouring or cocoa powder to tone down the red.

Steps:
1. Prepare templates for teacup handles (letter C) and saucer (circles). Please make your own as it depends on the size of your mould. Place an upturned silicone mould with hemispheres on baking tray. (My mould has 4cm circles). Set oven rack to lowest or second lowest position. I use top and bottom heat most of the time so set your oven rack according to which rack works best for your oven.

2. Make the almond paste. Sift all powdered ingredients together in a mixing bowl. Add egg whites and mix well to form a thick paste. Set aside, covering with cling wrap to prevent it from drying out.

3. Make the Swiss meringue. In a clean glass bowl, combine all ingredients together (except the food colouring). Set the bowl over a pot of simmering water without the water touching the bottom of the bowl. Whisk until all the sugar is dissolved and temperature is 45-50℃. This should take around 5 minutes. Use extremely low heat as you want all the sugar to dissolve fully when the temperature is reached. Use an electric mixer to beat until meringue is thick enough not to slide in bowl when turned upside down. About 5-6 minutes. Add red colouring and beat until well mixed. Using a metal bowl for the meringue is fine too but as it conducts heat much faster, make sure that you use really low heat to double boil the egg whites. 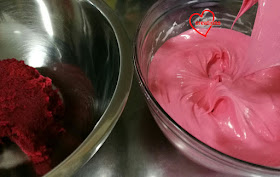 4. Add about a third of the meringue into almond paste. Use electric mixer on low speed to mix until just combined. You may use a spatula for this but I find that electric mixer may be easier as the paste is really thick. Add the remaining meringue and fold with spatula until you reach the lava stage. You may refer to this post on how to fold and test batter consistency. 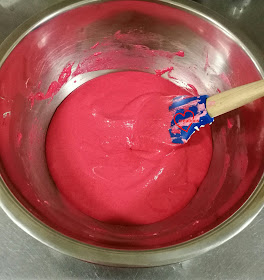 Red macaron batter. Note that the colour will deepen with time so don't fret if your batter looks slightly pinkish and bright.

5. Transfer batter into piping bag fitted with a 6-7mm round tip to pipe saucer and hemispheres. Use a smaller tip for the teacup handle. 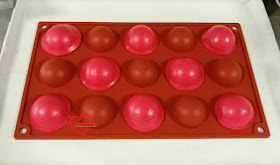 Here's the video tutorial on how to pipe.  Do note that it's quite a bit of trial and error to determine how much batter to pipe.


Update 01/04/20
I have found an easier way to pipe the hemispheres so do watch this second video with the pink batter! I am leaving the older version here for reference. I used a Wilton #7 tip for piping the pink shells. 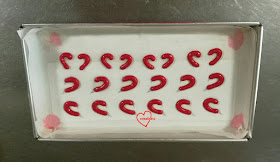 6. Rest the piped batter until dry to touch and bake in preheated oven at 140℃ (top and bottom heat only). Do note that the baking time and temperature profile will vary based on your oven and the various sizes of piped shells. Hemispherical shells take longer to bake through than regular flat macaron shells due to the insulation caused by air gap between silicone mould and baking tray. Thoroughly baked hemispheres should pop right off the mould on their own easily when cooled. If your shells are still stuck, bake for a longer time. It's ok if you overbake the shells as you can mature it longer with filling or brush inner surface with cream or syrup to hasten the maturing process. I lower the temperature to 120℃ and turn on the fan in the oven after the first 15-20 min to prevent excessive browning while thoroughly drying out the shells. Allow for longer drying time for hemispheres before baking as it may be more prone to cracking if the membrane formed is not strong enough. 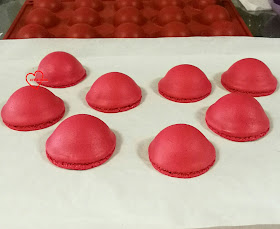 Freshly baked hemispheres! Please don't fret if you don't have perfectly symmetrical hemispheres as it is difficult enough to pipe on a curved surface. Lopsided feet may also be more common as it is difficult to ensure that you get the same amount of batter all around. But, practice makes perfect! I have not attained perfection yet but I am not fretting 😆 so please have realistic expectations when you attempt to make these.

Here's a other view of the baked shells. You may want to pipe a ring near the top of the hemisphere when the piped hemispheres are partially dried (see picture below) for the teacup stand at the base of the cup. You may also add the stand post-baking using royal icing, which was what I did for most of the hemispheres. 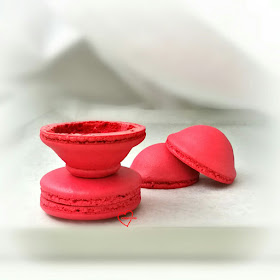 I filled the teacup handles with white chocolate and attached it to the hemisphere with royal icing. I used royal icing to glue the teacup to the saucer as well as decorate with the word 福, which means "blessed". You may use melted chocolate instead of royal icing if you wish.

Of course I am not going to leave the teacups unfilled. Take a peek at a cute surprise in my next blog post 😉. Please acknowledge the source here if you do make teacup macarons and share it on social media. It took me some time to create the video, write up this blog post as well as experiment with hemispherical shells over the past two years when time allowed.

Update: I received a couple of queries about whether there is a need to rap the tray after piping hemispherical shells. I don't rap the tray as I normally would as it would disturb the piped batter and make it go out of shape. Instead, I use a toothpick to pop any visible air bubbles before the membrane is formed on the surface. Although you may use any preferred recipe or method of making the macaron batter, using Swiss or Italian methods produce batter with less air bubbles to pop.