Have you ever done school projects whereby you had to make the solar system model or Sun, moon and Earth model? I was given such a project but using macarons to do so 😂 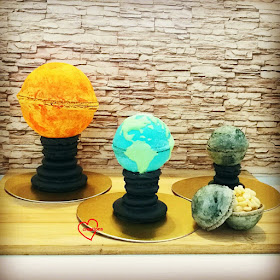 This is not just a static display but all three can rotate on the stand!


Pardon the poor lighting as it was raining. It would help to have sturdier 10cm cakeboards too 😅

I have done a number of bakes involving the use of cake pop moulds to make hemispherical shells. But this is the first time I am making a full sphere by joining two hemispheres together.

I used the regular recipe for the macaron shells here. Both regular and reduced sugar recipes can be found here. You may refer to my Creative Baking: Macarons book for a systematic presentation of the basics and complex shaped macarons. You may refer to my video tutorials for macaron basics and piping of complex shapes on the blog too. You may wonder which part of the model requires piping of complex shapes on flat surfaces. Let me reveal a little secret on the hidden mechanics of the frame. You need to pipe donut shaped macarons for the frame/stand of the models. I have made a few macaron structures with moving parts so I am able to reveal a bit more. 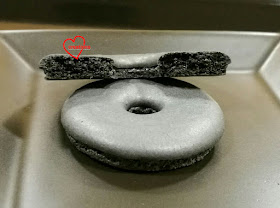 Showing off the feet and interior of donut shaped macaron shells. No hollows and beautiful, even feet all around!

One thing I learned about this bake is that not all silicone cake pop moulds are made the same. The blue cake pop moulds I have below are not as good for the purpose of baking macaron shells as they remain stuck for a long time and require much longer time in the oven for drying out. The dark red moulds however were very easy to use. Spacing between the rounds was wider and the macaron shells just detached themselves from the silicone mould while cooling down out of the oven. 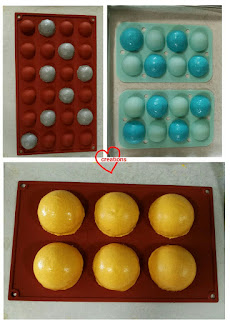 
Remember to thoroughly bake through the shells before removing them from the mould or you will risk breaking the shells while unmoulding. 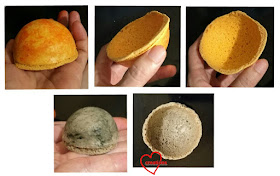 I made the edible paint by dissolving gel food colouring in vodka, use crushed paper towel to soak up some paint and dab on the surface of the shells.

The Earth was a lot trickier. I had to assemble the whole thing before adding on the continents using royal icing. Icing on a spherical surface is tricky but thank God I managed it. Freehand too without using marker to trace out the continents! 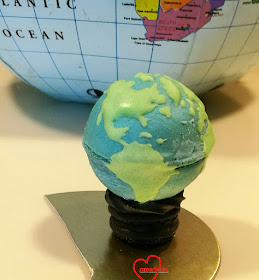 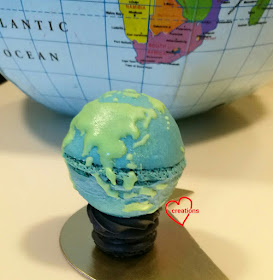 I borrowed my kids' inflatable globe as my reference

Fill the shells by carefully spooning mixture into each hemisphere. Quickly put two hemispheres together and gently press them together. Leave the chocolate to set at cool room temperature.

I hope this post inspires you to see that there's endless possibilities when it comes to making macaron structures :)