I have the privilege of baking for Victoria's little girl's first month celebration. I am a fan of Victoria's bakes and am really happy and excited for this chance to bake for her! She requested for sheep macarons as the little one is her little lamb given by God, and her name is Love :) 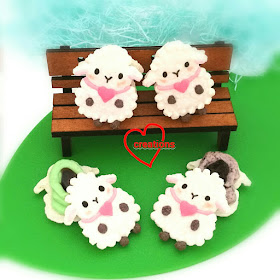 Victoria challenged me to make macarons with these two unique Asian flavours and I think I rose up to the challenge :p. I have made Ondeh-Ondeh macarons before but using the French method, and it was delicious! For a larger batch, Italian method would be better so this is the first time I adapted my original recipe for this method. Pulut Hitam (black glutinous rice) on the other hand was totally new. But I am so glad the experiment turned out fine!

In order to create macarons with these flavours, it is only fitting that I use some coconut to replace some almond meal in the macaron shells. The resulting shells are not as smooth looking as my regular macarons but they are so fragrant with a slightly chewy coconuty bite! The ratio of dessicated coconut: almond meal could do with some refinement but it's more for cosmetic purposes because the taste and texture is still awesome with my current recipe!

Note
Do scale the recipe accordingly as I was catering for a large batch of macarons. During this macaron mania, I catered for a few other smaller requests concurrently. My recipe is reduced sugar as well so if you don't want the hassle of using rice flour and corn flour, simply replace those items with icing sugar.

The sheep templates can be found in my Creative Baking: Macarons book.

Steps:
1. Prepare baking tray with template and baking paper over the template.

3. Prepare the meringue. Place caster sugar and water in a small saucepan. Stir a little to wet the sugar thoroughly. Heat the sugar and water until 115℃ on the candy thermometer. In the meantime, beat the egg whites with cream of tartar until soft peaks form. Reduce mixer speed if necessary. Once the temperature is reached, increase the mixer speed to high and carefully pour the syrup into the egg whites in a thin stream. Keep beating on high speed for another 15 minutes or until cool (about body temperature).

4. Fold the meringue into the mass in two additions until the batter flows in a slow-moving lava-like way. You may refer to this post for video tutorials on how to fold the batter and how to test the consistency of the batter. Scoop out about 2-3 tbs of batter and add sifted cocoa powder. Mix well.

5. Transfer batter into piping bags and pipe away! Bang the tray on the table to release trapped air. 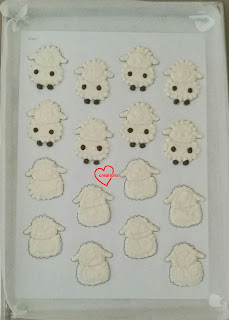 6. Dry the shells in air con room or under the fan until you are able to slide a finger across the shells without feeling any stickiness.

7. Bake in preheated oven at 140℃ on lowest rack for 10 minutes. Reduce temperature to 115℃ and bake for another 10-12 minutes or until the feet does not appear wet. Cool completely before carefully removing the baking paper away from the shells. 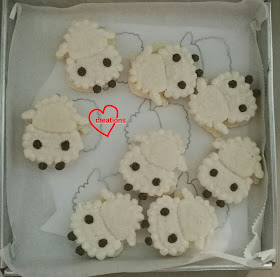 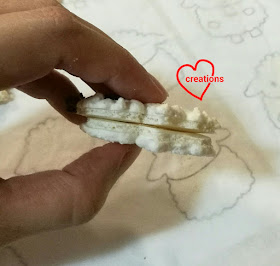 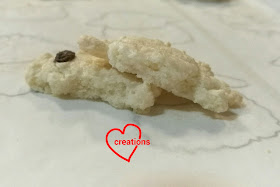 Victoria requested for no artificial colouring to be used at all so I coloured the pink parts of royal icing with a natural source of food colouring from PME. 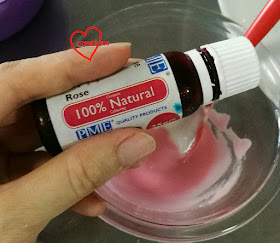 The heart-shaped pendants were made by piping royal icing on baking paper with heart template under it. I dried the icing overnight and gently peel it off the baking sheet. 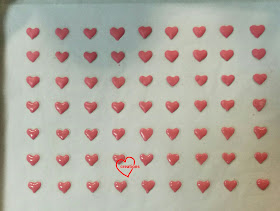 Charcoal powder was used to colour the icing black for the eyes. I used edible marker for the nose. 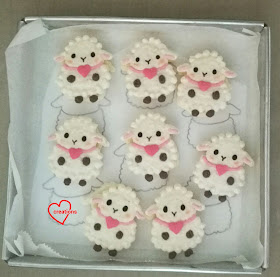 I made the black glutinous rice porridge and froze it earlier on ahead of this macaron mania. Do note that I omitted coconut milk (so as not to have an overpowering coconut flavour as the macaron shells already have coconut, and to improve the shelf life of the filled macarons) and reduced the amount of gula melaka in the porridge to cater for macarons.

Steps:
1. Wash the rice and soak for 2hours. Drain the water and wash and drain again.
2. Place rice, water and Pandan leaves in a saucepan. Bring to boil and simmer for 15 minutes, stirring now and then. Remove Pandan leaves.
3. Add gula melaka , salt and coconut flavouring (if using). Stir until sugar dissolves.
4. Continue to simmer and stir until the porridge is thick.
5. Remove from heat and blend until as finely as you can. You may cool and freeze this porridge. Simply thaw when you want to use it. 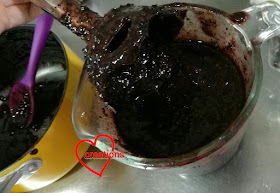 I use a less sweet whipped white chocolate ganache as the base for these macarons. The ganache will taste weird on its own but paired with the sweet shells, it will be just right. The Ondeh-Ondeh filling is flavoured with extra Pandan paste and the pulut hitam filling has a substantial portion of the porridge added in.

Steps:
1. Place white chocolate, shortening and butter in a microwave-safe bowl. Heat on medium power for 20 seconds and mix well. Repeat until mixture is smooth and melted.

2. Heat cream, lemon juice and flavourings in a small saucepan on low heat until it starts to bubble. Pour over melted chocolate. Mix well with spatula.

4. Freeze the mixing bowl with the ganache for 2 minutes. Mix well with spatula. Repeat until mixture starts firming up. You may switch to electric mixer and beat until creamy. 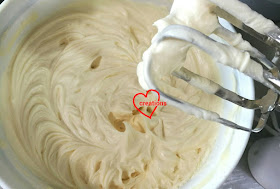 Pulut Hitam ganache
Use a ratio of 1:1 for whipped ganache : black glutinous rice porridge. I used a ratio of 2:1 for this batch and feel that the flavour is a little understated so you may want to increase the proportion of pulut hitam. Gradually add the porridge into the ganache and mix well. 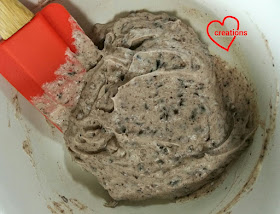 Assembly
Pulut Hitam:
Pipe a ring of pulut hitam ganache. Fill the center with the porridge. Place top shell on.

Ondeh-Ondeh:
Pipe a ring of Pandan caramel ganache. Pipe a thin layer of ganache in the middle of the ring to coat the base shell. Fill the "well" with gula melaka syrup. Pipe some ganache over the syrup. Place top shell on. 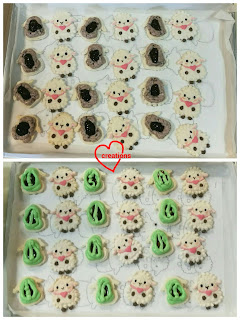 These Asian flavoured macarons are truly yummy and fragrant! So give it a try if you are fans of Ondeh-Ondeh or pulut hitam!

Here's a sneak peek of the inside of the Ondeh-Ondeh macaron. Forgot to take photo of the pulut hitam one 😅. 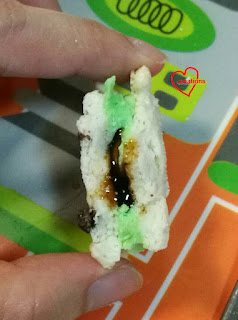 
With lots of love,
Phay Shing