This is one cheerful carousel that will put a smile on your face :). Happy Cat carousel! 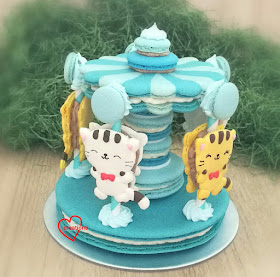 I made these cats recently and you may see them in this post.

I used the reduced-sugar macaron shell recipe. Both regular and reduced sugar recipes can be found here. You may refer to my Creative Baking: Macarons book for a systematic presentation of the basics and complex shaped macarons. You may refer to my video tutorials for macaron basics and piping of complex shapes on the blog too. You may refer to this post for the dimensions of the shells required to make the carousel and the respective baking times. I piped a scalloped roof like the one similar to the sheep macaron carousel as I think it's really pretty and it is very helpful for positioning the paper straws during the assembly. Checkout the sheep carousel post for detailed steps of assembly.

Just to share a couple of pictures of the process... 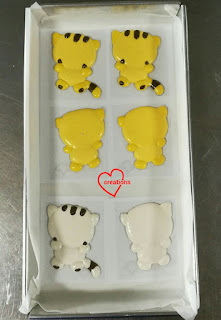 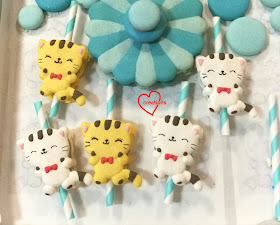 I filled the carousel with Earl Grey lavender filling as requested. I added both dried lavender and Earl Grey together in the mix. This time round I did things a little differently. Non-refrigerated filling that uses shortening and white chocolate as the base may tend to be a little dry although they are firm enough to withstand storage and display in Singapore's warm climate without the objects sliding down the pole. The texture of the carousel pieces are more like delicate biscuits due to storage at room temperature after assembly. I was making some Ondeh-Ondeh and Pulut Hitam macarons at the same time as the carousel but required whipped white chocolate ganache as the base. I piped an outer ring of whipped white chocolate ganache for the macarons in the base and central pillar of the carousel, such that the macarons will still be structurally stable but yet have a softer bite. I also brushed the inner surface of the shells with some gula melaka syrup which I had on hand to soften the shells a little. Using whipped ganache for the whole carousel is not advisable in Singapore's climate as the filling will be too soft for the carousel to be structurally stable. 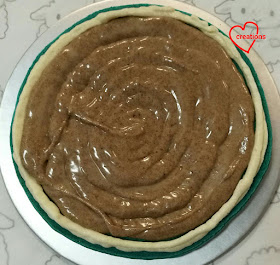