I have been dreaming about making this cake since last year and have made countless attempts just to get the pudding right. Presenting a new flavour of sponge and pudding cake that I came up with. Pulut hitam! 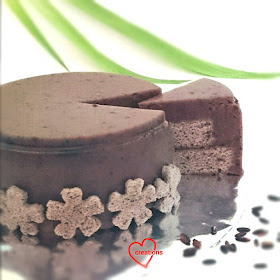 Here's a closer look at a slice... 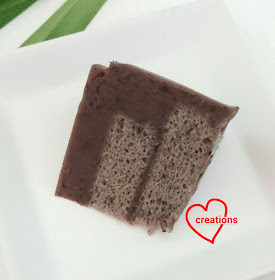 You may think what's so difficult about making pulut hitam flavour of this cake since I had no issues with other flavours. Due to the thick starchy consistency of bubur pulut hitam, the pudding either becomes too sticky and refuses to set or is not flavourful enough. Then there's the matter of choosing the right gelling agents in the right proportions. Thanks to Kenneth Goh, I have added mung bean flour (Hoen Kueh) as one of the gelling agents that compliments the starchy base of pulut hitam well.

I have made black glutinous rice chiffon cake before using black glutinous rice flour which is only available from Bake King in Singapore. I find the flour not as fragrant as Indonesia's so I decided to make the chiffon sponge from the porridge itself. Black glutinous rice on the other hand is easily available. It took me three tries to get a satisfactory chiffon sponge that is soft, moist and full of pulut hitam flavour with a nice balance of coconut fragrance. One of my attempts tasted more like coconut cake! I think I lost track of how many times I attempted the pudding :p. So here I am sharing with you the fruits of my labour. Here's a pulut hitam cake that is flavourful with a good balance of flavours, refreshing, cream-free, dairy-free, low in gluten content, not too sweet so even older folk like my parents love it. Please acknowledge the source if you ever attempt this and publicize your bake. Do be patient and wait for a day before eating. It tastes better the next day!

Steps:
1. Wash the rice and drain before soaking for 2hours. Drain away the water and wash and drain again.

2. Place the rice in a saucepan with water and Pandan leaves. Bring to a boil. Simmer for about 15 minutes before removing the leaves, stirring now and then.

4. When the porridge starts to thicken, add coconut milk and stir. Bring to a boil. Boil for another 10-15 minutes or until porridge is thick, stirring now and then to prevent rice grains from sticking to the bottom of the pot. 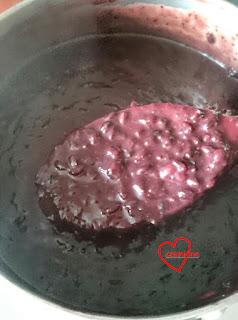 5. You may be tempted to have some of this aromatic porridge now but make sure you reserve 360g for the cake and pudding if you are making a 6-7" cake. Reserve more or less according to size of cake. Serve with more thick coconut milk or vanilla ice-cream if you like.

6. To prepare the porridge for sponge and pudding, blend the porridge until as fine in texture as you can. You may freeze it in ziplock bags if you are preparing the cake another day.

* if unavailable, you may use other vegetable oil like corn or canola. But do replace 20g of bubur pulut hitam with coconut cream for a stronger coconut aroma. Ideally, coconut oil should be used for that extra coconut fragrance without compromising the pulut hitam flavour. 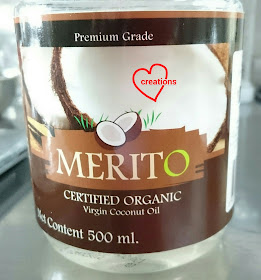 This stuff is seriously fragrant! And seriously pricey too!

Steps:
1. Line base of two 7" round or square tins with baking paper. Set oven rack to second lowest position. Preheat oven to 160°C.

3. Prepare meringue. In a clean metal bowl, beat egg whites with cream of tartar until foamy. Gradually add caster sugar and beat until firm peaks are formed or just about to reach stiff peaks.

4. Fold the meringue into the egg yolk batter in three additions quickly but gently. Pour batter into prepared tins. Tap the tins on the table to release trapped air bubbles.

5. Bake at 160°C for 13-15 minutes or until skewer comes out clean. Immediately flip the cakes onto baking sheet and cool with another sheet over the cakes.

I was doing a trial so I actually halved the recipe and used cookie cutter to cut out two 4" circles. 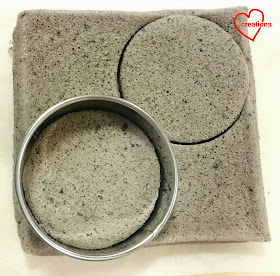 Steps:
1. Mix ingredients in B) in a small bowl and set aside. If you are using frozen bubur pulut hitam, make sure it is fully defrosted and at room temperature or warm.

2. Place all ingredients in A) in a saucepan and bring to a boil, stirring frequently. Let the mixture boil for a couple of minutes while stirring continuously. This is to ensure that all the agar powder is dissolved.

3. Stir B) again and pour into A). Bring to a boil and stir continuously. Keep stirring after mixture boils again for a couple of minutes.

4. Add C) and bring to a boil, stirring continuously. Keep boiling and stirring for a couple of minutes. I must stress that you have to take time to stir and boil for a while at each mention of this step otherwise the agar and mung bean flour will not get incorporated fully and your pudding will have a grainy texture and not set properly. I learnt this the hard way with many failures along the way.

As I did not want to waste too much resources, I used a really small springform pan (4.5") for my trial. The recipe I wrote here is for a 6-7" cake.

2. Place a sponge cake over it.

4. Place the second sponge over and pour more pudding around the sides.

5. Refrigerate for 2 hours or until firm. Gently unmould. Store in fridge overnight before consuming. It tastes better the next day.

I actually made this while assembling the unicorn macaron carousels so I kept the decoration simple and minimal. 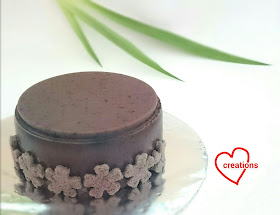 Really happy to finally come up with a working recipe for a cake I dreamed about :). My dad who does not have a sweet tooth loved the cake so much he finished most of it by himself!

Updates: Victoria of Victoria Bakes highly recommends this recipe! Do check out her post on her attempt at this flavour of cake. Checkout the cake I made for my mum's birthday with chiffon sunflowers brightening up the whole dark coloured cake!