This bake is inspired by a recipe that a dear friend sent me more than a year ago, not for macarons but for fruit flavoured souffles. That recipe had detailed steps on how to make Italian meringues using fruit juices/jam. It didn't occur to me until recently, that what if I adapted the fruity Italian meringue recipe for making macarons...It would be awesome! Just think about the colours and the flavours! All from natural fresh fruit sources 😍! Tastes less sweet too since sour fruit is used 😍😍! And so, I am excited to share this raspberry Valentine's Day bouquet :) 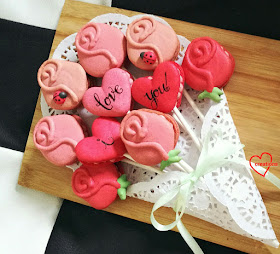 Added a couple of ladybug macaron shells too!

The recipe that my friend shared for raspberry Italian meringue involved cooking raspberries with water, sugar and lemon juice, reduced and strained to remove the seeds, put back in the saucepan to boil again until softball stage is reached before pouring into the beaten egg whites.

I tried the recipe but failed on my first attempt because I probably pressed out too much fruit. The mixture probably had too much fruit, not enough water and sugar. As a result, I had difficulty heating the mixture to softball stage (115℃) without burning it. I had to throw that attempt into the bin and start over. The next time round, I did things differently and more simply. I just replaced some of the water from my regular Italian method macaron recipe with raspberry juice. It worked really well although I may still need to tweak the ratio of raspberry juice to water ratio. I was erring on the safe side of not overdoing the raspberry juice bit so as to avoid burning the mixture again. Even with this bit of raspberry juice used, I could taste the fruit flavour and the meringue was less sweet than usual!

A word of warning, please use a large or tall enough saucepan for the fruity meringue as it will bubble and increase in volume a lot. The recipe that my friend shared also mentioned this warning.

I made the italian meringue a little differently from my usual, taking in the suggestion of replacing part of the caster sugar with icing sugar to stabilize the egg whites before syrup is added. I learnt something new from the recipe my friend shared :).

* I may try 20g raspberry juice and 35g water next time

2. Make the mass. Sift together almond, icing sugar, salt and freeze-dried raspberry powder. Add egg whites to form a paste. You may separate the mass into two or more portions of you want to do ombre shades. Colour each portion accordingly with pink and red gel food colouring.

3. Make the meringue. Place egg whites and cream of tartar in clean metal bowl. Beat the egg whites using electric mixer at low speed to loosen egg whites. In the mean time, heat the sugar, raspberry juice and water in a small saucepan without stirring. Swirl the pan if necessary. Once it starts to boil, you may monitor the temperature with a candy thermometer. You need to boil the syrup until 115℃. Once the temperature reaches about 105℃, you may turn up the mixer speed to medium and beat to soft peaks. Gradually add icing sugar at this point. Reduce mixer speed if necessary if syrup temperature is not reached yet. Once syrup is ready, remove from heat, turn up mixer speed to medium-high. Carefully pour the syrup in a slow and steady stream into the egg whites, avoiding the beaters. I like to pour it down the side of the mixing bowl. You can see the syrup streak in the picture below. Continue beating at medium-high speed for another 10-15 minutes until the meringue is cooled.

4. Divide the meringue if you are making more than one colour. Fold the meringue into the mass in two additions until the batter is able to move in a slow-moving lava-like manner. You may refer to this post for video tutorials on macaron basics.

5. Transfer into piping bag with a large tip to pipe the base of the roses. Bang tray on table to remove trapped air bubbles. Dry in air-con room or under the fan until a sticky membrane forms. Change to a smaller piping tip and pipe the rose design on top. Add on leaves at the bottom if you wish with green batter. You may refer to this post for video tutorial on how to pipe heart shaped macarons. Dry the shells until you are able to run a finger across the surface.

6. Bake in preheated oven at 140℃ for 10 min followed by 110℃ for another 10-15 minutes or until feet no longer appear wet. Cool completely before removing parchment paper away from the shells. 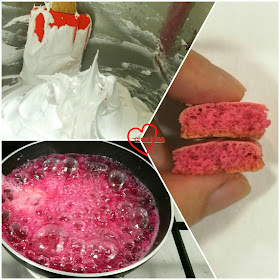 Raspberry sugar syrup, raspberry Italian meringue and the insides of the raspberry macaron shell, showing a nice texture with no hollows. 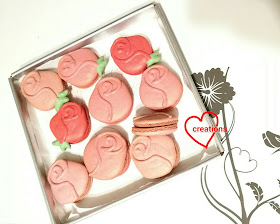 I used a fine tipped black edible marker to write the words on the heart shaped shells. 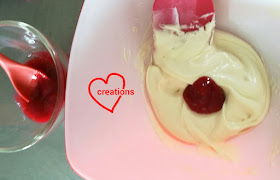 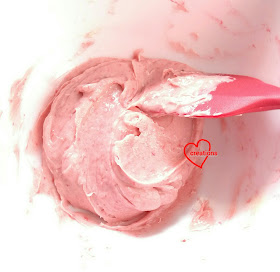 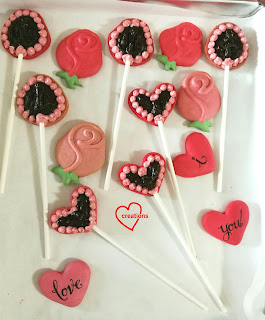 Let the assembled shells mature with the filling in the fridge for at least 24h. Leave the macarons out at room temperature for about 10 min before consuming.

Go ahead and surprise a loved one with this yummy and pretty treat!