My grandma loves Ah Mah sponge cake and I thought of making it for the extended family this Christmas instead of my usual log cake. But because it's my first time trying it, I thought I better do a trial bake. As I wanted to make a healthier but yummier version of the cake, I came up with this --- coconut Gula Melaka Ah Mah sponge cake! 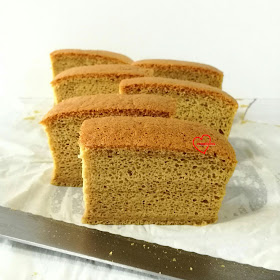 Pardon the poor photography as I wasn't planning on blogging this at first. But the reviews from my guinea pigs were so good I had to share this!

Pardon the lengthy post as I want to share the rationale of choice of ingredients and the ratio. The original Ah Mah sponge cake or commonly known as Castella sponge cake nowadays (although this is different from the original Japanese Castella cake) contains just five basic ingredients: low protein flour, sugar, eggs, milk and corn oil (or canola oil). I decided to modify the recipe by replacing some of these ingredients with healthier options. 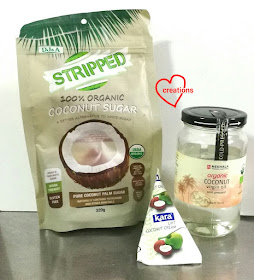 I replaced white sugar with coconut palm sugar, which has a glycemic index of only about a third of white sugar and contains extra vitamins and minerals that white sugar doesn't have. This makes the cake much more fragrant and tasty but healthier and diabetic friendly at the same time! I replaced corn oil with coconut oil. This also has the effect of imparting a wonderful coconuty aroma, as well as provide various health benefits that are too many for me to list here. You may click on this link to find out what health benefits there are. Replacement of milk with coconut cream or coconut milk adds flavour to the cake. If you are really health conscious, you may stick with low fat milk or coconut milk which is lower in fat content. Coconut cream has a higher fat content but keeps your cake really moist.

I studied quite a few recipes and found that Ah Mah cake is really just cooked dough chiffon cake. There are various ratios of ingredients that different recipes have but I came up with my version of what I think is the best compromise between stability and moistness of the cake. Most recipes use a flour: liquid ratio of around 0.67. Liquid includes oil and milk. A fellow homebaker Angela Low shared with me her favourite recipe for cheese Ah Mah cake with ratio of around 0.56 but with the cheese powder considered part of the "liquid" portion. She shared that it's the most moist she has tried. Higher ratio results in cakes with better structural stability but also drier texture. I decided to use a ratio of 0.6 as a compromise.

Just a note, the cake I baked is actually scaled to a 5-egg recipe as I didn't want to "waste" too much resources on a trial bake. The cake could have been taller if I used a 6-egg recipe for this size of baking tray. Just in case you wonder how come my cake doesn't appear that tall 😅.

There are variations in the method of baking from the recipes I researched. Some use water bath method to steam bake. Some line the sides of the baking tray with cardboard pieces to insulate the walls of the baking tray. I choose to do what I always do with my chiffon cake bakes, which is to place a tray of water at the base of the oven to create steam as well as allow the cake to rise more slowly.

Meringue
6 egg whites
1/4 tsp cream of tartar (or a few drops of lemon juice)
66g Gula Melaka (you may finely chop from those in block form or buy the powdered version. You may increase up to 78g if you have a sweet tooth. Mine is a less sweet version)

Steps:
1. Line the baking tray with parchment paper. Place a tray of water at base of oven. Set oven rack to lowest or second lowest position. Preheat oven to 145℃.

2. Sift flour, salt and baking powder together in a large bowl. Set aside.

3. Heat oil in small saucepan to 70℃ (or for two minutes in microwave oven as I have seen from a recipe). Pour into flour mixture. Whisk until smooth. Gradually add coconut cream and whisk/ beat with electric mixer at low speed until well combined. The batter will become thick and dough-like at this stage. Add one egg yolk at a time into the mixture and beat until well combined and smooth. 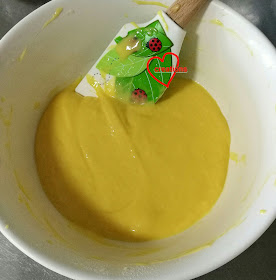 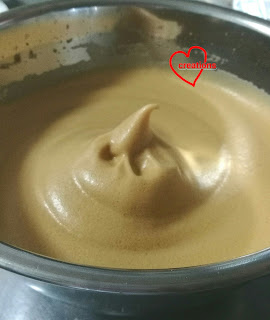 6. Pour into prepared baking tray and smooth the top of the batter with a spatula. Tap the tray on the table a few times to release trapped air bubbles. Bake for 60-70 minutes or until skewer comes out clean.

7. Remove from baking tray and cool completely before slicing. 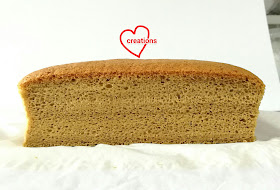 The person who was my willing guinea pig shared the cake with her mother in law, colleagues and boss. This was the combined feedback I got:

"I gave my mother in law and colleagues to eat. Feedback all said very nice. Can taste the distinct gula melaka, not too sweet and also not oily. Two say taste like steam cake. My boss likes it and had two. I like it very much and took two myself because the aftertaste not sweet, didn’t trigger phlegm."

She also added that the cake was really moist, unlike most chiffon cakes that she has eaten which she finds dry and hard to swallow.

How can I not share this recipe after I receive this feedback :p. Do give this a try if you love Gula Melaka flavoured cakes!

Update: the cake is so good the boss wanted to order more from me but I don't have the capacity to squeeze in 😅