I have another request for mermaid macarons along with seashells and starfish. But it's assorted flavours this time. 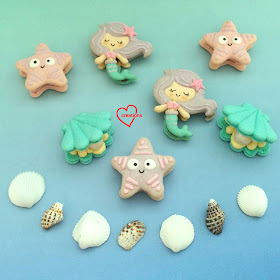 You may refer to this post for my first set of mermaid themed macarons.

I made these using my usual reduced sugar Italian method recipe but something happened and I needed to rebake the starfish so I took the chance to try out Swiss method. The "accident" was quite hilarious and I was fortunate it happened to the starfish and not to the mermaids which were a lot more time consuming to pipe. I was trying to speed up drying of royal icing decorations on the starfish using my oven but I forgot to check the temperature setting which was left at 200℃ from baking the previous night's dinner. When I realised something was wrong, the stars have charred! They looked so much like cartoon characters after an explosion that I had to laugh! Baking boo-boos do happen :p.

Since it was only a small batch that needed rebaking, I took the chance to use the Swiss method which I have been wanting to try but had no time for. The Swiss method is similar to the French method, except that you partially cook the egg whites. It is more stable than the French method and good for making small batches. I have posted another Swiss method recipe which I used to make my first ferris wheel. I am going to share my first attempt at Swiss method here which was more successful than my second attempt with another recipe which I adapted from here.

Steps:
1. Prepare baking trays with template and baking paper over it. Sift together almond and icing sugar. Set aside. I divided the powder mixture into two as I was making two colours of batter.

2. Whisk caster sugar and egg whites together over a pot of simmering water until all the sugar has dissolved and temperature is 45-50℃. Remove from heat.

3. Beat the egg whites at medium speed using an electric mixer until stiff peaks form. Divide the meringue into two. Use some meringue to stick the baking paper down to tray. 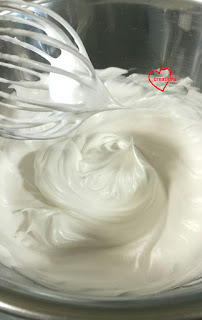 Note that the meringue should still be smooth but peaks are upright.

4. Add gel colouring to the meringue and gently fold in to mix the colour in. 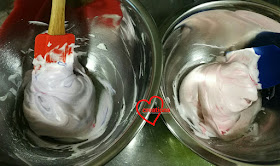 5. Scatter the powder mixture over the meringue and fold in. You may choose to scatter a few times or all at once. 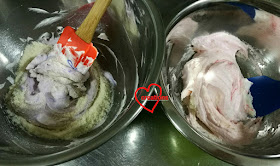 6. Keep folding until batter is smooth and is able to flow off the spatula in an almost continuous manner. Please refer to this video for the correct consistency. 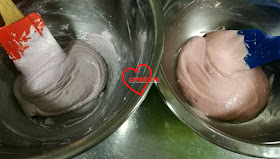 7. Transfer into piping bag fitted with piping tip of desired size. Pipe away! You may refer to this post on how to pipe complex shapes and a more systematic presentation from my Creative Baking: Macarons book. 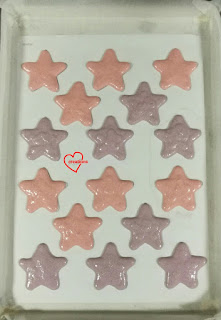 8. Some suggest that you don't need to rest macaron shells baked using Swiss method. Simply bang the tray on the table after piping and bake in preheated oven at 130℃. I didn't have the guts to try it so I still went ahead and dried in aircon room until dry to touch before baking in preheated oven. I preheated to 150℃ but turned the temperature down to 130℃ once the tray is in. Set oven rack to lowest rack. Bake for about 20 min or until feet no longer appears wet. Cool completely before removing baking sheet away from shell. 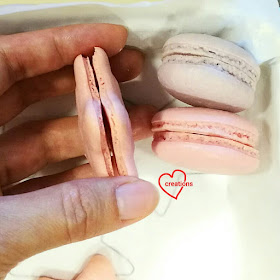 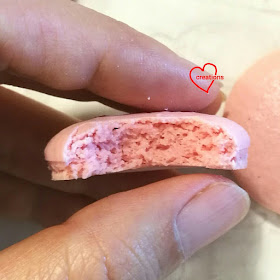 Nice fluffy interior with no hollows!

However, I find that I am unable to get a really smooth shell surface with this method without risking over folding. 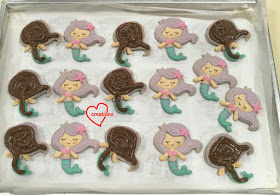 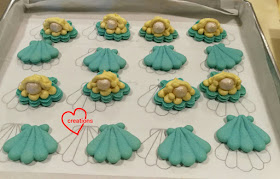 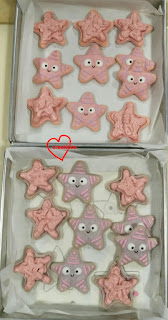 Since it was my first try, I had to do a taste test as well. Freshly baked shells didn't seem as delicate (slightly chewy) but after maturing with filling for a day, the texture was perfect. Here's a peek at the insides! 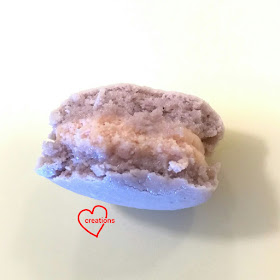