My dad loves my Pandan kaya gula melaka cake and requested it for his birthday. I had a brainwave of making a stump cake with cute animal deco on top so I came up with this :). 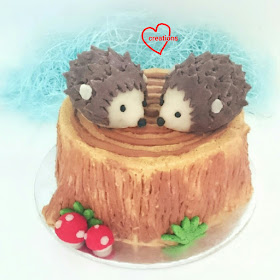 The hedgehogs are snowskin mooncakes with Pandan lotus paste filling. You may read about how to make them over here. They are really much easier to make than they look! I wanted the tree stump to look more realistic so I decided to change the chiffon sponge to gula melaka flavour instead of Pandan. Gula Melaka chiffon sponge still has Pandan and coconut milk as main ingredients that give the cake the fragrance, along with gula melaka but the Pandan flavour is downplayed while the gula melaka flavour is enhanced. It's my first attempt at making a vertical swiss roll with pudding as the filling so it was a challenge but I am so glad that the outcome looks really "stump-like" and it wasn't too difficult once I get the hang of it. My first stump cake was filled with swiss meringue buttercream and it was a easier to assemble. Nonetheless, I would highly recommend this cake as it is really fragrant, rich yet refreshing, fondant-free, cream-free and dairy-free as well!

* Divide ingredients into two equal portions unless you are able to squeeze both trays into the oven at the same time. Each tray can accomodate a 2 egg yolk/3 egg white recipe.

Steps:
1. In a heavy based saucepan, combine coconut milk, gula melaka and Pandan leaves together. Heat over low heat until all the gula melaka has dissolved. Set aside to cool. Pass the mixture through a sieve and squeeze all the liquid from the Pandan leaves. Discard the leaves.

4. Prepare the meringue. In a clean metal bowl, use an electric mixer to beat the egg whites with cream of tartar until firm peaks form, gradually adding in the sugar once the egg whites are foamy.

5. Fold the meringue into egg yolk batter quickly but gently in three additions. Tap the tray to release air bubbles.

6. Bake for 11 minutes or until skewer comes out clean. Immediately remove from baking tray, carefully peel off baking sheet and cool the cakes in rolled up position. Roll the cakes along the longitudinal direction.

While the cakes are cooling, prepare the pudding. Boil about several Pandan leaves in about 1L of water for about 10 minutes to make some Pandan water.

Steps:
1. Mix ingredients in B) in a jug and set aside.

2. Place all ingredients in A) in a saucepan and bring to a boil using medium heat while stirring continuously.

3. Stir B) again and slowly pour into the saucepan while stirring continuously. Continue to stir until mixture boils.

4. Sieve the pudding into a large bowl. Place a cling wrap touching the surface of the pudding. Let it cool for about 30-45 minutes at room temperature.

5. Use a ladle to stir the pudding as it thickens and continues to cool until consistency is like slow-moving lava (sounds like macaron batter haha :p).

Assembly
1. Unroll the cooled cakes. Use a long serrated knife to cut each rectangle into 8cm wide strips. You may not use all the cake for the main body of the stump.

2. Use a spatula to spread some pudding onto a strip. 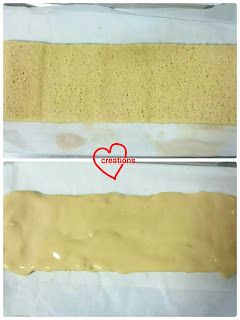 3. Roll the cake like a swiss roll. Don't worry if some pudding spills out at the sides. Place it on the cakeboard vertically as shown in the top left picture below. Repeat for subsequent pieces. You may wish to add some triangular pieces at the base to form tree roots. 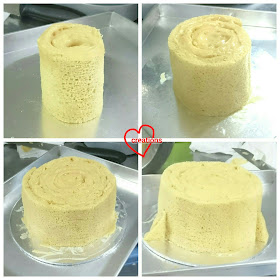 4. Cover the sides with more pudding using a spatula. It doesn't have to be very neat as real tree trunks aren't ;). 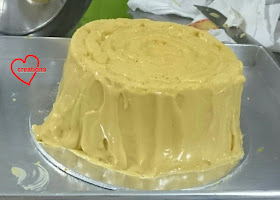 5. Scoop out about 1/3 cup of pudding and add 1 tsp of sifted cocoa powder and mix well. Transfer into piping bag fitted with a 6-7mm diameter piping tip. Pipe a spiral on the top of the stump, following the spiral made by rolling the cake. Use a spatula to spread some pudding at the side to give the bark of the tree stump a darker shade. Again, it doesn't have to be very neat. Put the cake in the fridge for 35-40min. 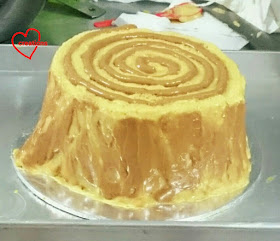 6. Use a fork to scratch some markings at the side by dragging from bottom to top of the sides. Refrigerate at least for 24 hours in airtight container before serving. The sponge and pudding cake is best eaten about 3 days after assembly. 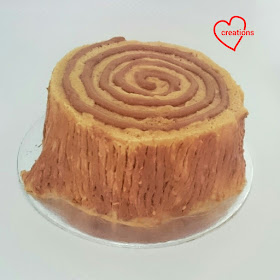 I added on some Pandan green chiffon cake grass and some mushrooms made from snowskin. 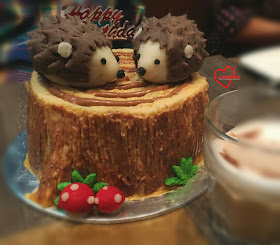 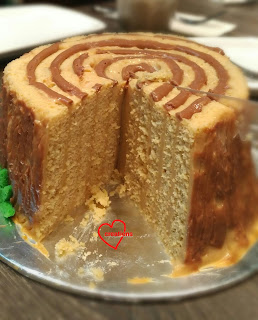 Take a peek at the awesome insides with alternating sponge and pudding!

Everyone young and old, chiffon cake haters and chiffon cake lovers all loved this cake too! My brother and hubby who are not chiffon cake fans said both texture and taste are superb. Mum and dad didn't find it too sweet too even though I was a little apprehensive about the amount of sugar in the cake. I can't reduce the gula melaka by too much or the flavour will not be strong enough. My family loved it so much they said I should make this flavour of cake for grandma's birthday next month! So I highly recommend all gula melaka fans to try this out!