I have a Japanese mummy friend who wanted to order some cupcakes for her younger boy's birthday during a very busy period for me. She didn't mind it being a simple bake as long as it is yummy. Here's a humble bake from me. Chocolate chiffon cupcakes with strawberry swiss meringue buttercream and rainbow sprinkles :). 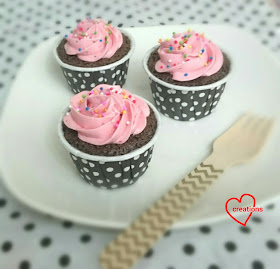 I used my chocolate log cake recipe that was very well received for the chocolate cupcake base.

Steps:
1. Preheat oven to 140°C with tray of water at base of oven (optional but I put it there to create steam). Set oven rack to second lowest position.

3. Prepare meringue. In a clean metal bowl, use electric mixer to beat egg whites with cream of tartar until foamy. Gradually add sugar and beat until firm peaks form, just before stiff peaks.

4. Fold the meringue into the egg yolk batter quickly but gently in three additions. Spoon the batter into cupcake cases until about 1cm from the top of the rim. Gently tap the cases on the table to release air bubbles.

5. Bake for 30-35 minutes or until skewer comes out clean. Cool completely before frosting the cupcakes.

Steps:
1. Place egg whites, sugar and salt in a heatproof bowl that can fit over a saucepan filled with about 1" depth of water without the base of bowl touching the water. Use a hand whisk to whisk the egg whites continuously over simmering water in the saucepan until sugar has dissolved and temperature reaches 71.1°C on a candy thermometer. This takes about 5 minutes.

2. Remove the bowl from heat. Use an electric mixer to beat the egg whites on high speed for 10 minutes until the meringue is stiff, glossy and cool to almost room temperature.

3. Add butter once cube at a time and beat until smooth. Don't worry if the buttercream appears to curdle halfway. Just continue to beat and gradually add butter and it will all come together in the end. Continue beating for another two minutes after all butter has been added until the cream appears light coloured and fluffy. 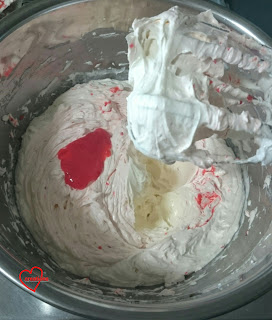 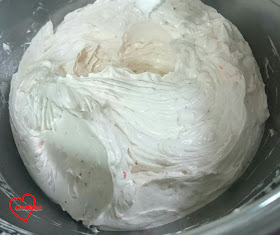 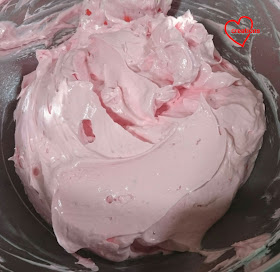 Transfer buttercream into piping bag fitted with a Wilton 1M tip and pipe swirls on the cupcakes.

Sprinkle on some rainbow sprinkles and store the cupcakes in airtight condition in the fridge. It can store for 3-4 days. 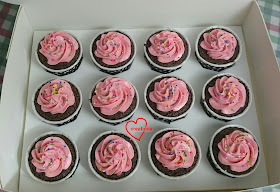 My friend sent me a photo of a cupcake at the party... 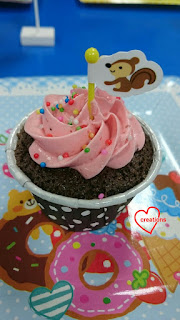 She fedback that everyone said the cupcakes were really yummy!