Ever since I posted the pink unicorn macaron carousel, I have been getting lots of requests for macaron carousels. I had to turn down many of them due to my full baking schedule. I was secretly hoping someone would request for a different design because I don't like to repeat my designs. Here's a variation of carousel that I had fun with although the assembly was nerve wrecking as usual. Presenting my first sheep themed macaron carousel! 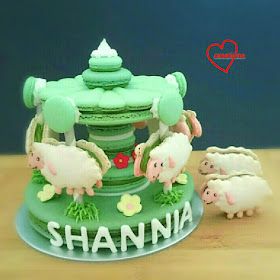 Here's how the mass looks like when coloured with just matcha powder. I didn't add too much as I didn't want the shells to turn out too dull. 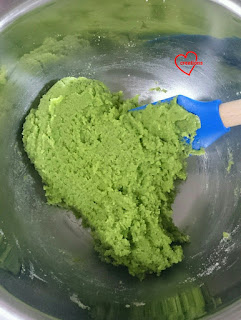 I divided the mass into two equal portions and coloured one light green and one dark green. I used a bit of charcoal powder (about 1/4 tsp) to colour dark green. 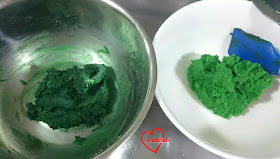 You may refer to this post for the dimensions of the shells required to make the carousel and the respective baking times. One thing I did differently here is I made a scalloped roof (seashell pattern) instead of a simple circle. I find this effect very pretty and also very helpful for positioning the five poles later on during assembly. The regular stripes serve as a ruler/marker for positioning the poles at regular intervals easily.

In order to create the scalloped pattern, pipe alternate stripes and dry until a sticky membrane forms in an air-conditioned room and/or under a fan. About 15-30 minutes. 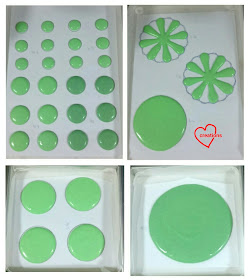 Pipe the other set of stripes when the first alternate set has partially dried. 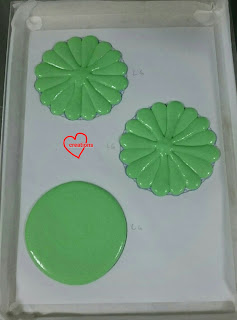 Remember to bang the tray on the table and use a toothpick to pop air bubbles if necessary.

I baked the carousel shells and sheep shells on different days. The sheep macaron shells were baked along with the Fox and Rabbit plush toy macarons from Descendants of the Sun, some Snoopy and Charlie Brown macarons, and some bulldog macarons.

Here's how I piped the sheep in stages... 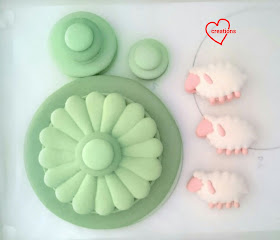 Decorate the sheep with royal icing and edible marker.

I filled the shells on the carousel with Matcha white chocolate. The recipe can be found in my Creative Baking: Macarons book or over here. Carousels need to be able to withstand room temperature storage and display in warm Singapore so I always use non-refrigerated fillings for carousels. You may use very firm ganaches too if you like.

It takes two days to assemble a macaron carousel as the central pillar needs time to stabilize.

Day 1 of assembly involves mounting the sheep (or whatever subject matter) onto paper straws. It doesn't matter if the pole length is an estimated one. You can trim just before mounting onto the structure. 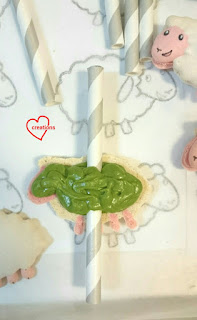 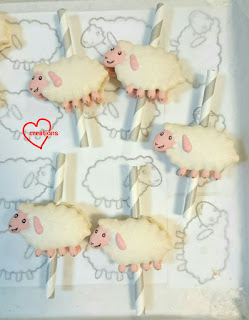 The central pillar also has to be assembled on Day 1. Fill the largest macaron, one 6cm macaron and two 3.5cm macarons with filling. Use royal icing to attach the largest macaron to a cakeboard and all the macarons to each other as shown below. I decided to add on some store-bought sugar flowers to add some colour. 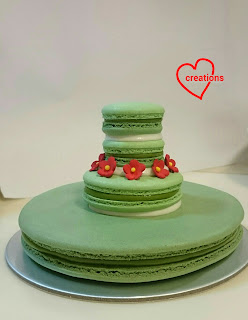 Assemble the roof with Matcha filling as glue. I forgot to take photo of this. My apologies.

I had some loose pieces as well but I filled them with dark chocolate ganache and lemon curd. Replace lime with lemon from the recipe. These macarons have to be stored in the fridge. 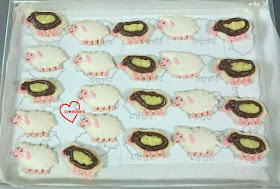 Day 2 of assembly involves mounting the roof onto the central pillar, glueing them together with royal icing. 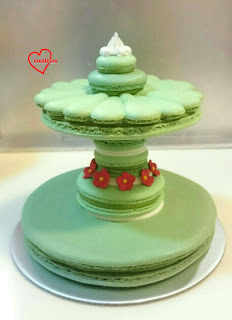 Stick the poles onto the structure with royal icing. Cut the poles to appropriate length before you attach it to the main structure. 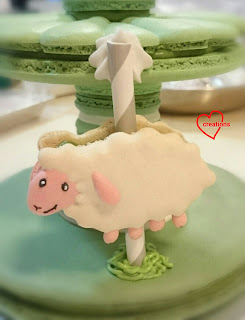 Decorate as you wish :).

Here's a top view of the carousel! I really love the scalloped roof! 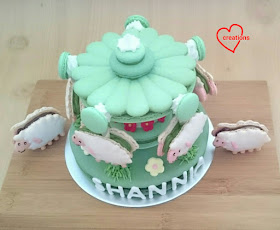 Store the carousel in airtight condition at cool room temperature. It can keep for 1-2 weeks.