This was an unplanned bake that blessed a friend's father on Father's Day. Pandan kaya gula melaka sponge and pudding cupcakes topped with chiffon cake Dahlias! 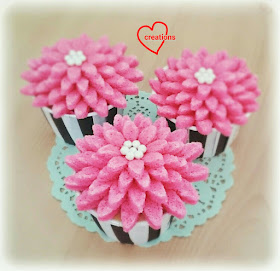 I needed to do a trial for drippy pudding down the sides of a bigger floral sponge and pudding cake so I took the chance to make a few cupcakes for my friend who has been patiently waiting for a chance to taste my Pandan kaya gula melaka cake that many people raved about at the high tea.

I made a thinner Pandan layer cake this time so there were three sponge layers in the cupcake. 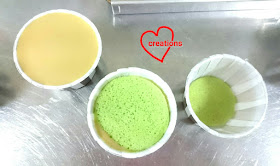 I used Daisy cutters of different sizes to create the dahlias. 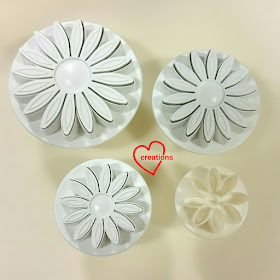 I cut a circle out of the bottom two Daisy cutouts such that the upper layers can sit into the hole a little. My friend has kindly taken a nice photo of the cross-section to show this as well as the layering of sponge and pudding. 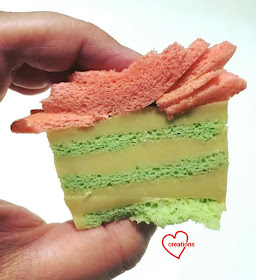 Stick some white dragees with marshmellow at the center. I made some white paint by dissolving white gel colouring in syrup to highlight the edges of each petal with a small brush. Finish off by brushing some syrup (dissolve 5g sugar in 20ml hot water) to keep the flowers moist.

Store in fridge for at 1-2 days before serving to let the flavours come together.

My friend's parents loved the cupcakes! Thank God that such an unplanned bake could bless a family :). Here's her very encouraging words posted on Facebook:

"Macaron queen Phay Shing does it again! Was lucky enough to get just a few of her pandan chiffon cupcakes sandwiched with gula melaka pudding and topped with pink chiffon sponge flowers for Fathers' Day.

The pillowy sponge and soft pudding were super fragrant with the magic combination of pandan, coconut milk and gula melaka, and though very satisfying, these cupcakes weren't at all heavy given that there wasn't any cream or butter in them. Daddy was most pleased :)"


Check out this post for a wider variety of flowers adorning the cupcakes!