I had some aged egg whites to clear from the fridge and since I had time during my break from baking for orders, I decided to give the French method a try again after relying on the Italian method for the longest time. I was pleasantly surprised that the taste and texture of the macaron shell this time round were pretty close to what I get using the Italian method. Here's my successful attempt which is meant for my hubby who is a Star Wars fan :) 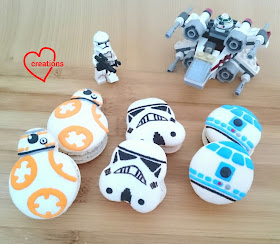 As there were too many macarons for hubby to finish, I gave some away to a birthday girl and someone who needs a pick-me-up. The rest were up for grabs. I opened for sale and they were snapped up within an hour of announcement! I filled half of the macarons with hubby's favourite spiced apple swiss meringue buttercream with salted caramel and the other half with dark chocolate ganache laced with coffee and liqueur. I decided to make the dark chocolate ganache more adult-friendly knowing that kids are probably not consuming these ;). Add coffee and liqueur to dark chocolate and you transform an otherwise delicious and rich but gentle version of chocolate to a mind blowing powerful one.

Many people have tried Daniel Leong's recipe for French macarons and raved about their success. I thought why not give this recipe a try. I adapted my recipe from the one that Jeannie Tay posted on her blog over here. My previous attempts usually resulted in shells that were way too chewy for my liking. I prefer the delicate texture of macarons made with the Italian method. Upon studying the ingredients carefully, it's not hard to see why his recipe works so well. The ratio of castor sugar:egg whites is pretty high. This results in a firmer and more stable meringue than in recipes that call for less. I have seen recipes with castor sugar that is less than a third of the weight of egg whites, whereas the castor sugar is about 90% of the weight of egg whites in Daniel Leong's recipe. Similarly, the icing sugar:almond meal ratio is also pretty high. Icing sugar provides structural stability to the macaron shells as well. With these combined factors for improving the stability of the batter, chances of success is increased.

I tweaked Daniel's recipe a little by including a bit more salt to counter the sweetness, cream of tartar to stabilize the meringue, cornflour and egg white powder to help the piped shells to dry faster. You may omit all these but I was working on a humid and rainy day and didn't want to wait for hours for the shells to dry.

Do checkout this blog post for video tutorials of macaron basics such as how to test the consistency of batter, how to test if the shells are dry, how to pipe the batter and how to remove shells from baking sheet. Folding the batter using French method is slightly different from Italian method. You begin by folding more gently with the French method to avoid deflating the meringue too much whereas you can be more rough with the Italian method.

Feel free to half the recipe. I was clearing out the egg whites in my fridge so the portion is bigger over here.

*Or gel food colouring or omit if you wish. If using gel, add to the meringue when you just reach the stiff peak stage. Beat a while more to incorporate the colouring until you get a really stiff peak.

Steps:
1. Prepare baking trays with template under a baking sheet.

3. In a clean metal bowl, beat egg whites with cream of tartar and egg white powder until  foamy. Gradually add caster sugar and beat until stiff peaks form and you are able to over turn the bowl without the meringue falling out. 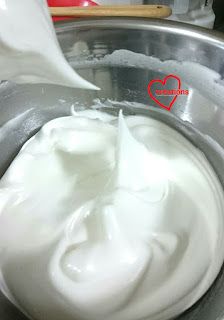 4. Scatter some of the almond mixture over the meringue and fold gently until evenly incorporated. Repeat until all the powder mixture is added. Now you may fold the mixture more vigorously, deflating the batter a bit more and testing the consistency as you go along. To test, drop some batter off the spatula. It should flow slowly in an almost continuous ribbon (see video tutorial link). If the batter breaks off at a few points, continue folding. If your batter is too runny, you have overfolded it. It's better to err on the side of underfolding. Use some batter to stick the baking sheet onto the baking tray.

5. Transfer batter into piping bag fitted with a Wilton #10 tip (about 5-6mm). Pipe the shapes accordingly and use a toothpick to nudge the batter where necessary. Remember to bang the tray on the tableto flatten any peaks. 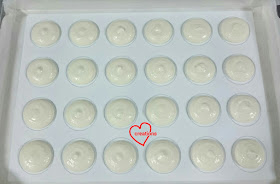 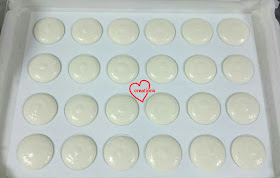 After banging the tray on the table 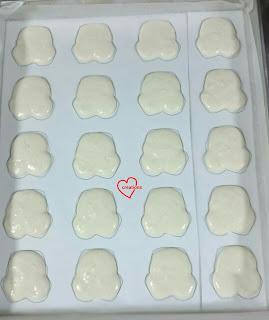 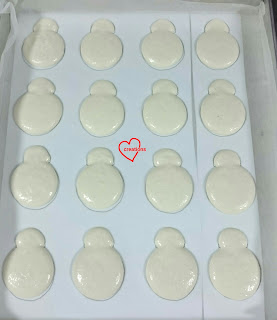 6. Dry the piped shells in aircon room and/or under a fan. The shells should be dry to touch when you run a finger across the surface. About 2 hours for me.

7. Bake at lowest rack in preheated oven at 140°C for 10 minutes, rotate the tray and continue baking at 130°C for another 7 minutes. If the feet still appear wet, bake for another 5 minutes at 120°C and check again. People have asked how I keep pastels  pastel and whites white. Good temperature control is the key. A higher starting temperature is necessary to set the structure and prevent hollows in shells but a lower temperature is necessary  towards the end of baking time to prevent browning. Always use an oven thermometer too!

8. Cool completely before attempting to gently peel the baking sheet away from the shells.

I had to do a taste test before I decided if it was worth the effort to follow through with deco and filling. 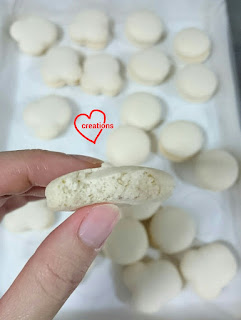 I still prefer the Italian method for a more delicate texture, especially the reduced sugar version with rice flour substitution. Hubby thinks so too. But for an easier way of making macarons logistics wise (no need for boiling syrup and candy thermometer), this recipe is a keeper!


I used royal icing and edible marker to add on the details. It took me about one and a half days to complete all of them due to the fine details involved! Kids were home for the school holidays too so I was a little distracted. 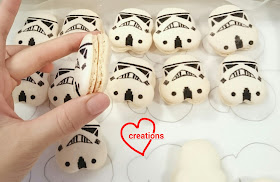 Checkout the awesome feet on these stormtroopers! 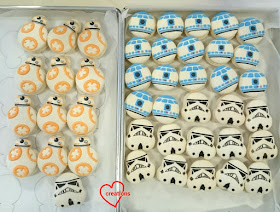 Here's the recipe for the adult version of dark chocolate ganache...

** You may use more cream for a softer ganache, up to a ratio of 2:1 for cream:chocolate. I am catering for hot Singapore where the room temperature is about 28°C.

Steps:
1. Melt chococolate with butter in microwave-safe bowl for 20 seconds on medium power. Stir with spatula. Repeat until mixture is smooth and chocolate has all melted.

2. Heat cream with coffee granules added until it starts to bubble.

3. Pour cream onto melted chocolate. Stir well in one direction.

4. Add salt and stir until dissolved.

5. Mix vanilla in liqueur. Add the mixture one tsp at a time to the ganache. Mix well.

6. Set aside at room temperature to firm up to toothpaste consistency. About half an hour to an hour. You may put the ganache in the fridge to speed up the process but do check every 10 minutes or so.

7. Transfer ganache to piping bag and pipe onto bottom shells. 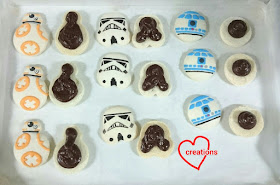 8. Sandwich the filling by placing top shells onto the bottom shells. Refrigerate in airtight container for at least 24h before serving. Let the macarons sit at room temperature for at least 15 minutes before eating when taken out from the fridge. If the ganache is still hard, leave it out a while longer.

The other half of the macarons were filled with spiced apple swiss meringue buttercream and salted caramel. The recipe can be found here. 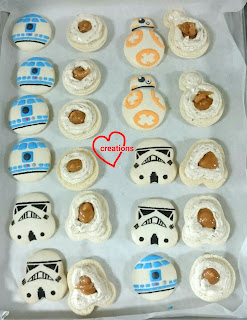 This batch of macarons took about 4 days to mature to a level that I am satisfied with. When consumed too early, the texture is not as delicate.

Hubby loved the macarons a lot, needless to say :). The other recipients loved the fact that these macarons are not too sweet!

To my love, my dads and all dads out there, blessed Father's Day!

Update 14/1/17: check out this post for the recipe for reduced sugar macaron shells using the French method!