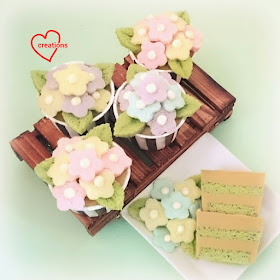 These cupcakes were at the same high tea event as the Christian themed Easter macarons and naturally coloured rainbow iced gems. Feedback was really good for these cuppies so do give the recipe a try! I used the same recipe as my Pandan kaya gula melaka logcakes which were very well received too. You don't have to make the chiffon flowers if you would like a simple but yummy bake. To make this cake extraordinary, some patience is required as you want to use homemade concentrated Pandan juice which takes a few days to settle in the fridge. This is a key to impart a strong Pandan flavour to the cake. Some of the essence labeled as optional in the recipe add an extra oomph to the cake too but you may omit if you can't find them. The actual work takes about an hour or so if you have everything ready.

3. Prepare the meringue. In a clean metal bowl, beat egg whites until foamy with electric mixer. Add cream of tartar and beat for a while before gradually adding sugar and beat until stiff peaks just start to form.

5. Bake for 10 minutes followed by 140°C for 15 minutes or until skewer comes out clean. Note that baking time varies from oven to oven so use it as a guide. Let the cake cool in the tray for a couple of minutes before removing from tray. Cover with a baking sheet to cool.

6. Use a 4cm and 5 cm diameter round cutters to cut out two layers of sponge cakes for each cupcake. As the baked 10" cake is quite thick, you may use a serrated knife to cut each circular cut-out into half. Store the cake cutouts in airtight container while you prepare the pudding. Use whatever round cutters you have if you don't have the exact sizes. 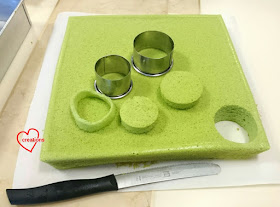 Steps:
1. Combine ingredients in (B) in a jug and stir. Set aside.

2. Place all ingredients in (A) in a saucepan and bring to a boil using medium heat, stirring now and then.

3. Stir ingredients in the jug again and slowly pour into (A), stirring the contents in the saucepan continuously. Bring to a boil while stirring continuously. Keep boiling and stirring for a minute. Remove from heat. Pour mixture through a sieve into a large bowl to remove any lumps that may be present.

You have to stir the pudding mixture now and then during assembly as it will begin to set when left sitting out for sometime.

Assembly
1. Place the 4cm round cake cut-out at bottom of cupcake case.

2. Spoon some pudding in to cover cake.

3. Place 5cm round cake cut-out over the pudding layer.

4. Spoon enough pudding to cover the Pandan cake below. 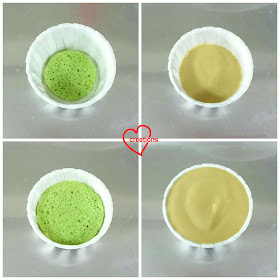 I baked some coloured layer cakes using the clear layer of Pandan juice after settling in fridge for a few days. I used flower and leaf cookie cutters to cut out the flowers and leaves of the cupcakes and glue on using melted marshmellows. I made white chocolate ganache(1:2 for cream:white chocolate) and piped them on as flower centers. Brush the surface of the flowers and leaves with sugar syrup made with Pandan water to keep them moist. These cakes can keep for 4-5 days in the fridge. 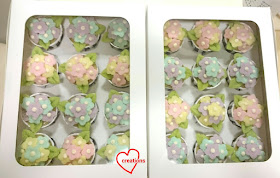 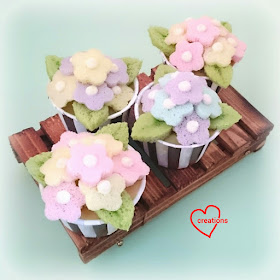 Enjoy this lovely treat! I had the theme of the event "Colour God's world" in mind when I chose this design, thinking about how God colours His world with beautiful flowers of various colours. Prayerfully hoping that the people who enjoyed the taste of these cupcakes took time to reflect on our wonderful Creator :).