This is my first attempt decorating cupcakes with macaron toppers. It's a pretty involved bake as it is a combination of baking macarons and cupcakes, and preparing the lychee flavoured swiss meringue buttercream (smbc) for the filling and attaching the macarons to cupcakes. So bear with me if this looks like a long post! 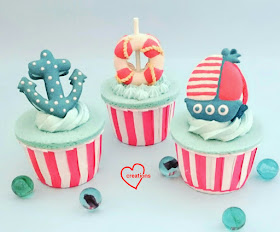 You may check out my newly launched Creative Baking: Macarons book for the basic recipe, baking tips and piping techniques.

You may refer to the basic macaron recipe  here (omit strawberry paste and pink colouring) if you wish although the book would provide a neater and more systematic layout of what you need to know. Simply divide the mass into three equal portions to colour them white, red and blue. I tried to include almost all the details using macaron batter as I wasn't sure that royal icing would hold out well if it stays in contact with moist air caused by storing moist chiffon cupcakes with the macarons without turning into a runny mess. The barrier of cream between cake and macaron is necessary as the moisture from the cakes would turn the macaron shells soggy if they stayed in contact for too long. I must admit that including all the details was very time consuming but worth a shot. If I don't try I won't know :p.

Just to share the pictures of making the macarons... 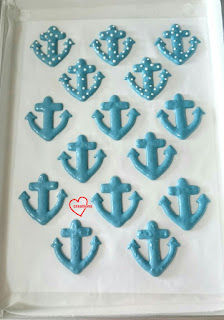 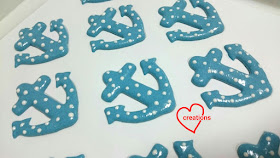 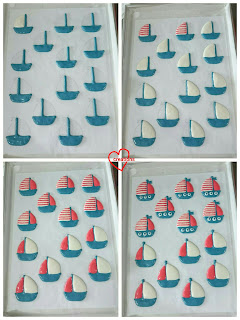 Piping the sailboats! These were the most tedious! 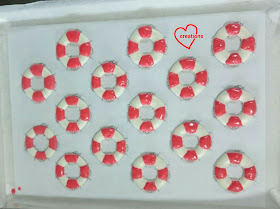 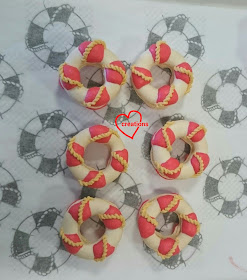 I filled the macarons with lychee swiss meringue buttercream.

Recipe for lychee swiss meringue buttercream
Ingredients:
320g smbc
1/2 tsp lychee flavouring (optional)
1/2 tsp rose water (optional)
1/2 tsp vanilla extract
30g lychee puree (I blended canned lychees, sieved to remove woody bits and heat in saucepan over low heat to reduce the amount of liquid for half an hour. This is to give a stronger lychee flavour with less moisture added so that the smbc doesn't turn out too soft.)
Blue gel food colouring

Gradually add puree and flavourings into plain smbc and whisk or beat well with electric mixer. Make sure that the reduced puree is cooled to room temperature before using. Add colouring until desired shade is reached. 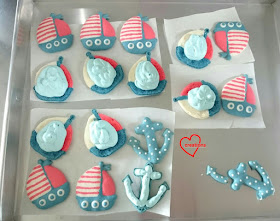 As you can see macaron shells can be very delicate. I accidentally broke an anchor! 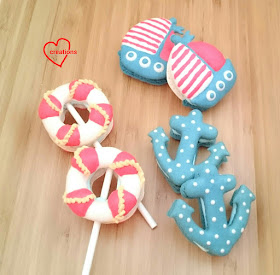 Assembled macarons and macaron pops! I decided to push the stick through more as I realised that it is too long for the cupcake.


I prepared some blue coloured water coloured with dried blue pea flowers to create the blue layer cakes. I baked two 10x12" and one 7x7" layer cake for the circles. Using a reduced egg yolk recipe and a bit of white gel food colouring helps to keep the blue from appearing too much like turquoise. A bit of blue gel is necessary of course as blue pea flower imparts a dull colour. 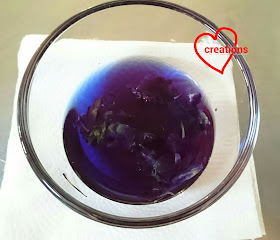 * you may replace with lychee puree if you wish.

Steps:
1. Preheat oven to 150°C. Place a tray of water at base of oven (optional but helps to create a more moist cake). Set oven rack to second lowest position.

4. Gently but quickly fold the meringue into egg yolk batter in three additions. I prefer to fold in using my bare hand for the last addition instead of a spatula for large amounts of batter like this to reduce the number of folds needed to make a homogeneous batter.

6. Place cupcakes in oven and reduce temperature to 135°C. Bake for 25-30 minutes or until skewer comes out clean. You may adjust your baking temperature and time according to your oven as each oven is different.

Cool completely before slicing off the dome  of the cupcakes (if necessary). Use a round cookie cutter to cut out blue circles from the layer cakes, sticking them on with melted marshmellows. Brush some lychee syrup from the canned lychees to keep the surface of the cakes moist. 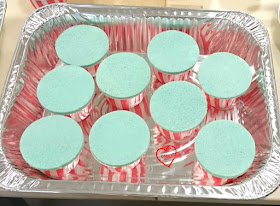 I piped on some smbc onto the tops of the cupcakes. 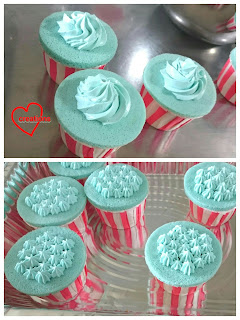 And then attach the macarons onto the cupcakes.

Keep the assembled cakes refrigerated in airtight box until time to serve.

Thank God that these were very well received along with some nautical themed brown sugar cookiepops!