I have a request for some flying unicorn macarons and I thought rainbow shooting stars would go well with them too :). 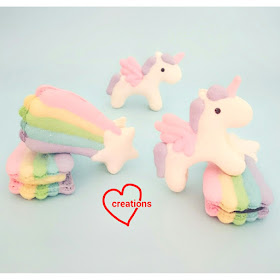 These are filled with firm dark chocolate ganache and lemon white chocolate as the party is outdoors.

Update (27/5/18): I have to remove the templates for the unicorns as they are going to be featured in my upcoming Creative Baking: Macaron Basics book. Please be patient and wait for the book release if you would like the template, hopefully some time before Christmas 2018 :)

*I used a bit of natural pink powder. For macaron bakes that require one or two colours, I try to use natural sources but if there are too many colours it is easier to use gel food colouring.

Steps:
1. Prepare baking trays with A4 paper templates on it. Place a sheet of baking paper on top. Use some Italian meringue to stick the corners of the baking paper down when you have made the meringue.

2. Sift almond and icing sugar together in a large mixing bowl. Add half of the egg whites (80g) and mix well until a thick paste forms. This is the mass.

3. Divide the mass into ratio of 12:3:3:2:2:2 for white:pink:purple:yellow:green:blue by weight and add gel colouring accordingly. I know this ratio is really tricky. I did some math to figure out a rough estimate so that you don't end up with too much excess batter of a certain colour. If you are making purely shooting stars, simply divide mass into 6 equal portions. If you are making only unicorns, use ratio of 6:1:1 for white: pink:purple.

4. Make the Italian meringue. In a clean metal bowl, beat 80g of egg whites with an electric mixer at medium-low speed until foamy and opaque. Do not beat past the soft peak stage. Reduce mixer speed if necessary. In the mean time, heat caster sugar and water in a small saucepan until 115°C. Use a candy thermometer to measure the temperature. It's easier to work on the egg whites and syrup simultaneously with a stand mixer but it's possible with handheld mixer as well although what I used to do was to monitor the syrup temperature while whisking the egg whites manually until it's time to pour the syrup in. When temperature is reached, remove saucepan from heat. Turn up mixer speed to medium high and carefully pour the syrup into the egg whites, avoiding the beater. Continue beating for another 10 minutes until meringue is stiff, glossy and cool.

5. Divide the Italian meringue into portions according to the ratio above or simply use the formula weight of Italian meringue = weight of mass x 0.55. Fold the meringue into the mass in two or three additions using the fold and press motion until batter flows in a slow-moving lava-like way. You may refer to this post for video tutorials of macaron basics like how to fold the batter and test the consistency.

7. Pipe the batter onto baking tray. You may refer to this post for video tutorials on piping complex shapes. Remember to bang the tray on the table a few times after piping to release trapped air bubbles and flatten any peaks. I had to use the toothpick often for these intricate macarons. 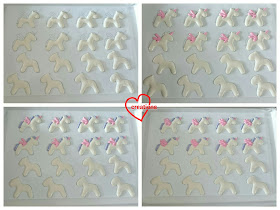 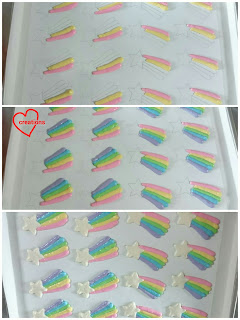 8. Dry the piped shells for 1-2 hours in air-conditioned room or under a fan until the shells are dry to touch when you run a finger across the surface. Preheat oven to 130°C towards end of drying time. Set oven rack to lowest position.

9. Bake for 10 minutes and rotate the tray.  Bake for another 7-8 minutes before checking on the shells. If the feet appear wet, bake for another 5 minutes at 120°C and check again. Cool the shells on the tray before gently peeling the baking sheet away from the shells. 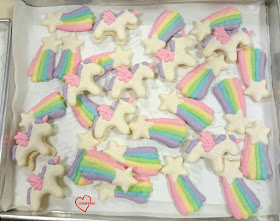 Use edible marker to add on the eyes of the unicorns. I brushed on some glitter lustre dust to give the macarons a slight glittery sheen. Does not show up very well in the photo but it's there. 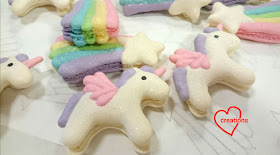 I filled the macarons with lemon white chocolate or dark chocolate ganache.

Steps:
1. Melt white chocolate in microwave oven or over double boiler.
2. Place all other ingredients in small saucepan and heat on low heat until shortening is melted. Heat for a couple of minutes more for any moisture to be released.
3. Gradually add shortening mixture to melted white chocolate, stirring well with each addition.
4. Transfer to piping bag and pipe onto macaron shells

5. Store the macarons at cool room temperature in airtight container.

Steps:
1. Melt dark chocolate and butter in microwave oven or over double-boiler. Add a pinch of salt and stir well.
2. Heat cream in small saucepan until it starts to bubble. Remove from heat and pour into chocolate.
3. Stir mixture in one direction with a spatula until well combined. Let the ganache firm up a little at room temperature. About 15 minutes.
4. Transfer to piping bag and pipe onto shells. 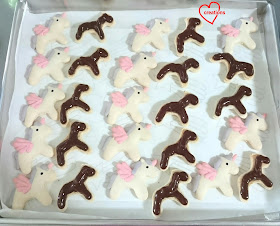 5. Refrigerate the ganache filled shells for at least 24h until time to serve. Let the macarons sit at room temperature for 5-10 minutes before consuming.

Keep a lookout for my next macaron post where I use some unicorns to create a carousel made entirely out of macarons!

Thank God that the macarons were very well received! 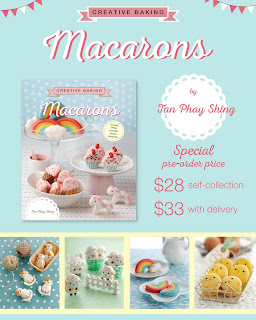