I made lots of logcakes last year that were very well received but I felt so much like a log cake production factory that I decided not to make any this year except for special cases. I have two such cases, one for my extended family Christmas dinner gathering and one for Susanne's family :). Presenting a creation that I am absolutely excited about! Pandan Kaya Gula Melaka log cake!! 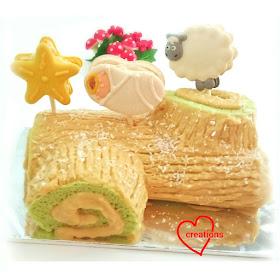 Not sure if you notice the dessicated coconut "snow" :p

I decided to decorate the cake with Christian themed edible decorations like I did last year, except that I used brown sugar cookies last year. This year I used  baby Jesus, star and sheep Christmas macarons filled with Pandan gula melaka flavoured swiss meringue buttercream :). 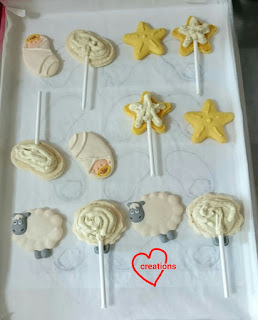 You may refer to this post for the recipe for gula melaka swiss meringue buttercream. I didn't have time to do from scratch so I just flavoured the smbc with gula melaka dissolved in a little Pandan juice and a pinch of salt added to offset the added sweetness.

Why this idea excites me so much is because Pandan kaya cake, which everyone is familiar with, can be transformed into something refreshingly different with just an addition of gula melaka and assembling in a way that you would with a log cake. The best part is, this cake is cream-free! You may do this with any flavour of my sponge and pudding cake creations too, such as Matcha Azuki, lychee rose and berry yoghurt! I have made a cake that has this flavour earlier on last year for my grandma's birthday. Check it out in this post.

Recipe for the cake is adapted from my Pandan kaya cake that a pastry chef gave a thumbs up for after he tasted it.

Steps:
1. To make Pandan juice, blend about 15 leaves with 40ml of boiled water and strain through coffee filter. Let the juice collected sit in a container in the fridge for a couple of days to let it settle. Use only the dark green portion. If you don't have time you may use the freshly made juice but colour and flavour is less intense. Make sure that the chopped gula melaka has no big lumps as it will be harder to dissolve in the egg yolk. 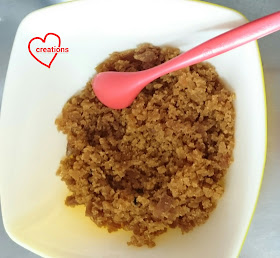 2. Position oven rack to second lowest position, preheat to 160°C. Line 10 x 12" baking tray with baking sheet. You may choose to grease it very lightly but it's optional. Steam baking is also optional for such a thin layer cake that is going to be covered in pudding/fudge.

5. Fold the meringue into egg yolk batter in 3 additions quickly but gently. Pour the batter into prepared tray and use a spatula to level the batter. Gently tap the tray on the table to release trapped air bubbles. 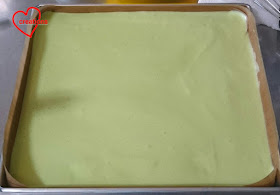 I love the reusable silicone baking sheet! No more wrinkles on my layer cakes!

6. Bake for 13 minutes or until skewer comes out clean. Immediately remove from tray and gently peel of baking sheet. Cool in rolled up position. 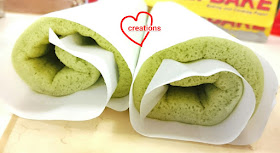 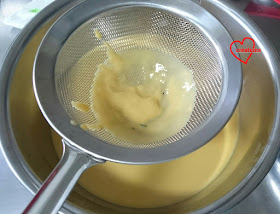 5. Divide the fudge into two portions. Cover one portion with cling wrap touching surface. This is to prevent the fudge from setting. Set aside. 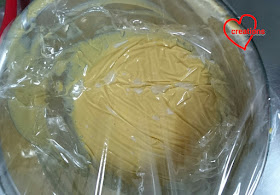 6. Let the other portion cool at room temperature, stirring now and then until it thickens to a consistency that still flows but not too runny. Use a ladle to scoop some fudge onto the layer cake and smoothen it with the back of the ladle. Leave about 2cm uncovered with fudge at the edge that is furthest from you. 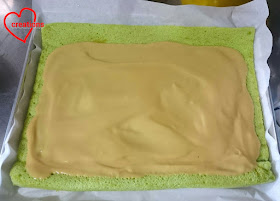 7. Carefully roll the cake away from you like a swiss roll. Squeeze the roll a little to push the fudge into any crevices, using the baking sheet to help you. Refrigerate for about 30 to 45 minutes. 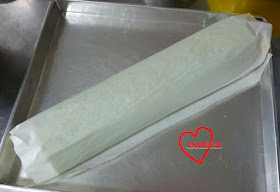 8. Remove cake from baking sheet and cut off the ends to fit the cakeboard. 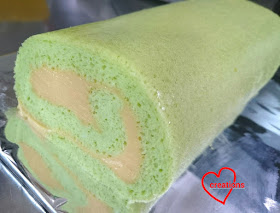 9. Remove cling wrap from from the other portion of fudge. Stir and use a spatula to apply the fudge on the swiss roll. 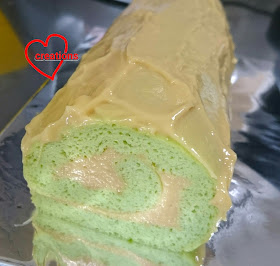 10. Place the cut-off ends on the log to form branches. 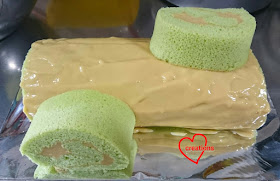 11. Apply fudge on the branches. 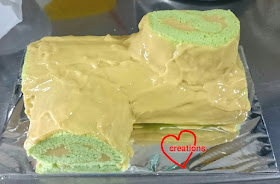 12. Refrigerate the cake for about 15-20 minutes to let the fudge set a little. Use a fork to lightly scratch the surface of the cake to form the characteristic logcake pattern. 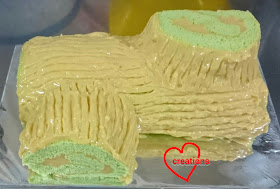 13. Transfer some fudge into piping bag. This step is optional. Pipe the swirl on the cut surfaces of the cake. 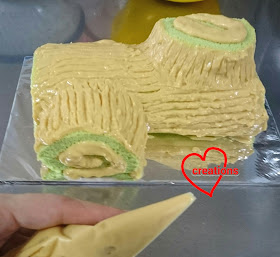 14. Sprinkle some dessicated coconut to deposit some "snow" on the cake. This step is optional. 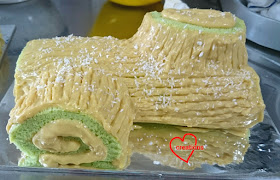 Refrigerate the cake overnight before serving. This is to allow the fudge/pudding time to set fully. 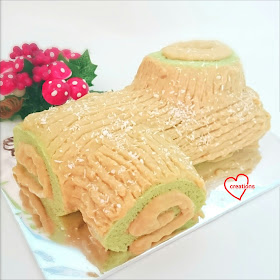 Thank God the cakes were very well received by both my family and Susanne's so do give this recipe a try if you are a fan of Pandan kaya cake :).