I made these hippos for hubby's birthday :) 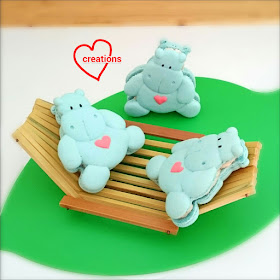 I was seriously enjoying my dose of cute overload making these :p. They are modelled after our favourite stuffed toy with a History and Personality ;). I filled the macarons with my hubby's favourite things: apple pie filling and salted caramel! I made some Molang macarons earlier this year for him for Father's Day with the exact same flavour. I was really excited that my experiment for creating indented features like the nostrils and vertical line down the front of hippo's face turned out really well!

I made the hippo template by taking photo of our stuffed toy and using the drawing tool in Word document to create the outline. Some of you have been asking for templates for the macarons I make so here's one :). I have taken time to create a clean line drawing for these hippos so I would appreciate it if you acknowledge the source here if you decide to replicate it :). This fits on an A4 sized paper.

Blue pea flowers were used to reduce the need for artificial blue colouring. I steeped the dried blue pea flowers in egg whites for the mass for an hour to extract the colour. 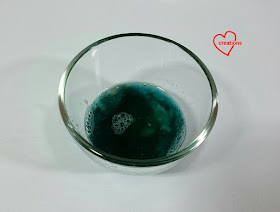 The resulting colour of the mass is more teal coloured so some artificial colouring is required, but less. I just needed to add a drop of royal blue and a drop of sky blue to get the hue I wanted. 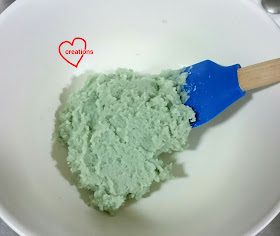 I actually made only 4 hippos but made many other macarons on the same day for orders that needed blue coloured shells. But I will type out the recipe for your convenience. Please refer to this post on the basics of making macarons, including how to fold the batter and test the consistency, and this post on how to pipe complex shaped macarons.

Steps:
1. Sift together almond and icing sugar in a large mixing bowl. Place hippo template on baking tray and line parchment paper over the template.

3. Add blue pea flower coloured egg whites into the almond mixture and mix well to form the mass. Add blue gel food colouring, keeping in mind that the colour will lighten up considerably after meringue is added.

4. Make the Italian meringue. Place water and caster sugar in a small saucepan and heat at medium heat until temperature reaches 115°C (measured with candy thermometer). In the mean time, beat the rest of the egg whites in a clean metal bowl with electric mixer at medium low speed until foamy and opaque. Do not beat past the soft peak stage. Reduce mixer speed if necessary to keep the egg whites moving. Once temperature of syrup reaches 115°C, remove from heat, turn mixer speed to high and carefully pour the syrup into the egg whites, taking care to avoid the beaters. Keep beating on high speed for 10 minutes until Italian meringue is thick and glossy.

6. Prepare piping bag fitted with a Wilton #10 tip. Standby #5 tip for the ears and #7 tip for the limbs. Don't worry if you don't have the exact sizes. Having something close to it will do. Transfer the batter into the piping bag.

7. Begin by piping the snout of the hippo. Bang the baking tray on the table to release trapped air bubbles. Leave it to dry in aircon room or under a fan for 15 minutes or until a thin sticky membrane forms. Pipe the top of the head and body with the same #10 tip. Bang tray on the table again and let the batter dry for another 15 minutes. Pipe on the ears. Use a toothpick to carefully draw the vertical line on the face and make indents for the nostrils. Pipe on the limbs and bang the tray on the table. Dry the shells until you are able to run your finger across the surface of the shells, about 1h depending on humidity. The shells should not feel sticky at all. 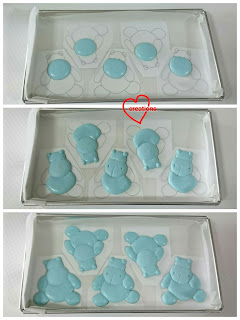 8. Preheat the oven to 135°C towards end of drying time. Set oven rack to lowest or second lowest position. Bake the hippos for about 20-25 minutes, rotating the tray halfway through baking. These macarons are about 6+cm tall so baking time is a little longer. You may reduce the temperature to 120°C towards the end of baking time to prevent browning. Note that the baking time is an estimation as each oven is different. 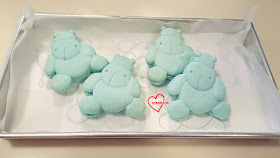 Use black edible marker to draw the eyes. Prepare some dark pink royal icing and add on the heart on the belly. 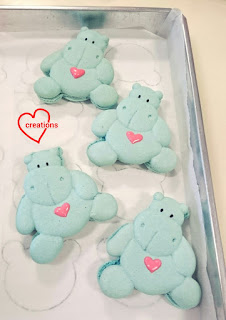 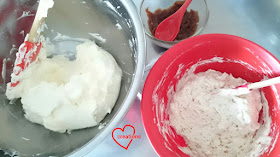 Making spiced apple swiss meringue buttercream! Plain smbc on the left, cooked spiced apple in the small glass bowl and the mixture on the right. 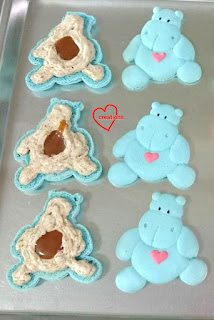 Refrigerate for at least 24 h before consuming...if you can. My kids had some barely 2 hours after assembly as they couldn't wait! Macarons always taste better when you allow them time to mature.

Hubby and the kids (who only got to share one hippo) loved them very much as they are cute and flavourful! I made some simple round macarons with this filling too so the kids got to enjoy more of these... Without the hippo shells :p.