I am supposed to be busy filling hundreds of macarons but I couldn't resist trying this out as I baked some layer cakes for my friend's son's birthday cake. Presenting my first attempt at Matcha Azuki bean sponge and pudding mini cakes! 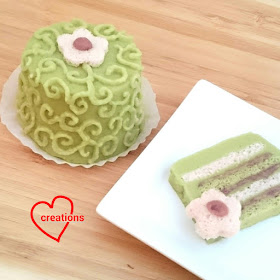 I have only baked lychee rose flavoured sponge and pudding cake so far but I already have some requests for this type of cake as it is also fondant and cream-free but has the addition of pudding layers to soft chiffon sponge that lends an interesting texture to the whole cake. Perfect for eating after a heavy meal! It is lighter and more refreshing than mousse cakes as it is not heavy cream based. Low in fat and not too sweet! Since nobody would like to order something that is totally untested, I decided to experiment and get some feedback from my family and neighbours.

Steps:
1. Line baking tray with parchment paper. Set oven rack at second lowest position. Preheat oven to 160°C. Dissolve Matcha powder in hot water. Set aside to cool.
2. Prepare egg yolk batters. Whisk egg yolk and sugar until pale and thick. Gradually add oil and mix well. Add Matcha/ Azuki paste and vanilla extract. Mix well. Gradually whisk in sifted flour and salt. Add pink food colouring if you wish.
3. Prepare meringue. Beat egg whites with cream of tartar until soft peaks form in a clean metal bowl. Gradually add sugar and beat until stiff peaks form and bowl can just be overturned without meringue falling out. Don't overbeat.
4. Divide the meringue into two. Quickly but gently fold the meringue in 3 additions for each egg yolk batter. Pour the batters into the pan side by side each other.
5. Bake for 12 minutes or until skewer comes out clean. Immediately flip onto another baking sheet and gently peel the baking sheet off.
6. Cool completely before cutting out circles with a cookie cutter. The circles should be slightly smaller than the paper cupcake cases/ silicone moulds. I used paper cases. Slice each circle into two thinner circles if you would like 2 Matcha and 2 Azuki sponge layers in the cake like what I did. If you prefer not to, it is OK to leave the circles as it is for 1 Matcha and 1 Azuki sponge layers in the cake. 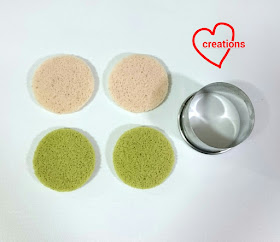 You may have extra pudding if you don't intend to use the excess for piping on pudding decoration designs.

Steps:
1. Mix (B) together in a jug. Set aside. Dissolve Matcha powder in hot water.
2. Place all ingredients in (A) except for Azuki paste in a saucepan. Bring to a boil on medium heat while stirring constantly.
3. Stir (B) again and pour into (A) while stirring constantly.
4. Keep stirring until mixture thickens and starts to boil. Remove from heat.
5. Scoop out about 5 tbs of pudding mixture and mix well with Azuki bean paste.
6. Transfer Azuki bean pudding mixture into piping bag with a hole cut at the end.

Assembly
1. Spoon some Matcha pudding into the cupcake cases.
2. Place an Azuki (or Matcha) layer cake on top.
3. Pipe some Azuki pudding over the sponge layer and carefully spoon some Matcha pudding around the sides and over the Azuki pudding.
4. Place a different flavoured sponge and repeat step 3.
5. Keep repeating the layering until all 4 (or 2) sponge cakes are used up.
6. Chill the cakes in refrigerator for 2 hours or until firm. 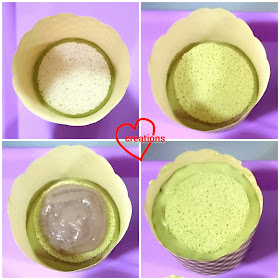 7. Carefully unmould the cakes. It is easier to unmould from silicone moulds. You have to be careful when tearing the paper cupcake case if you are using. If the surface is not as smooth as you would like, fret not. You can still pretty up the cake by piping Arabesque patterns on the surface like I did ;). Transfer excess Matcha pudding into piping bag with a small hole. If the pudding has set too much to be easy to pipe, reheat the mixture and stir over low heat until consistency is just right to pipe.

You may also wish to leave the cakes in the cupcake cases and decorate it this way... 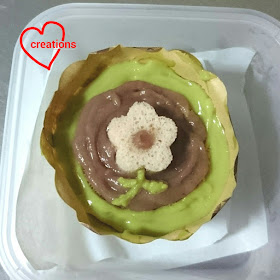 8. Chill the cake until firm again if you piped on pudding decorations. Leave the cake chilled overnight before consuming.

My neighbour, Susanne and my kids loved this cake although hubby felt that the pudding was too soft. Boiling the pudding mixture a little longer would do the trick of firming up the pudding a little more. Overall the cake is still refreshing and has a good balance of Matcha and Azuki flavours.

Keep a lookout for berry yoghurt flavoured sponge and pudding cake which I will post in the near future!