My friend requested for a birthday cake for her aunt who is a superwoman busy bee! 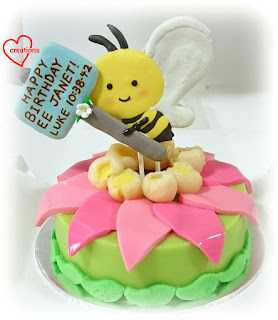 Pardon the poor photography. I was in a hurry to take the photo and quickly packed up.

The Bible reference is for Ee Janet to be reminded of what's important :p. This is another lychee rose chiffon sponge and pudding cake which I did concurrently with my grandma's birthday cake. It's my first attempt at using pudding and giant macaron as decorative items so there's room for improvement. Nonetheless, thankful that the cake was well received! Feedback was exactly what I hope the cake would be, that it was perfect for eating after a heavy sumptuous birthday meal as the cake is light, refreshing and not too sweet.

As I was in the middle of baking big batches of macaron shells for my creative macaron book with little time but some macaron batter to spare, using macaron as decorative item was the way to go. You may refer to this post for the basic macaron shell recipe (omit strawberry emulco and pink and green colouring) and this post for the lychee rose chiffon sponge and pudding recipe. This busy bee cake is a smaller 6" cake so do downsize the recipe for the cake a little. Baking huge macaron shells is slightly different from smaller shells. Baking time is about 30-35minutes but with the temperature set at a low value of 110-120°C for the last 10 minutes or so.

I originally filled the bee with lychee rose pudding but didn't realise it was a mistake until I finished assembling the cake and was about to stick the bee in to take a photo. The pudding turned the macaron shells soggy! I had to throw the destroyed macaron away and redo the bee from scratch. Fortunately I had time and could squeeze in a round of macaron bake before the cake was due. Lesson learnt! Only fill macarons with tried and tested fillings with high fat content like buttercreams, ganaches, pastry cream, peanut butter, nutella or melted chocolate. 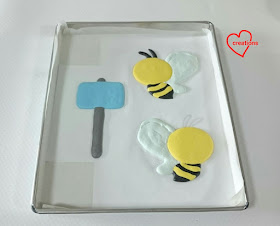 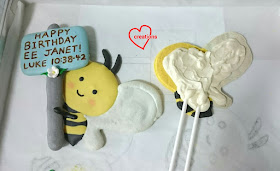 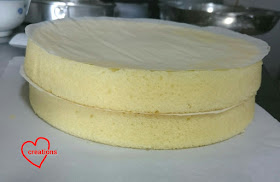 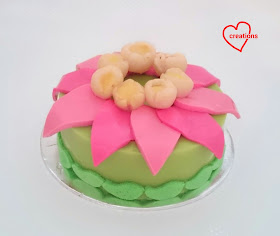 Another lesson I learnt is not to use contrasting colours for layers of pudding that are in contact with each other as decorative pieces. Diffusion of colours will happen over time as the cake is stored for a couple of days. The result is not so pretty after two days. I stuck with a single colour for my grandma's cake so this wasn't an issue.

Glad that at least the cake was yummy :p. If I don't experiment I will save myself a lot of grief but I will learn a lot less. Will know what to do and what not to do for my next few lychee rose cakes! Apparently this flavour is popular and I already have a few requests for it in November!