I have a request for safari themed macarons. Any animal and quantity at my convenience.... My kind of request when I have many other macarons to bake as well :). Thankful to have such a thoughtful requester! These were baked as and when I had the capacity while I baked for the creative macaron book. There are hippos, zebras, tigers and giraffes :) 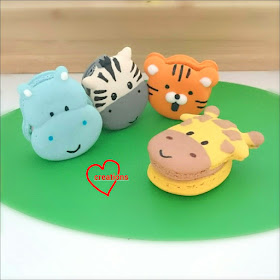 For your convenience, I will just type out the recipe.

Here's a photo of the carrot powder my hubby bought from Akari at Anchorpoint! 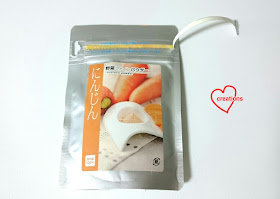 Steps:
1. Make the mass. Sift together icing sugar and almond powder. Add 80g of egg white and mix well to form a thick paste.
2. Divide the mass into the ratio of 2:2:2:2:1:1 for white:blue:orange:yellow:brown:grey.
3. Add sifted natural powder colouring to the respective masses and mix well. Add additional gel food colouring to get the desired shade. It is optional to use natural food colouring if you don't have but it helps to reduce the amount of artificial colouring needed. Here's how the orange mass looks like when coloured with just carrot powder... 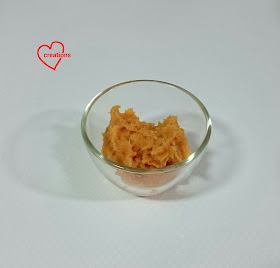 4. Make the Italian meringue. Heat caster sugar and water in a small sauce pan without stirring until the syrup temperature reaches 115°C. In the mean time, beat 80g of egg whites in a clean metal bowl with electric mixer at medium-low speed until foamy and opaque. Do not beat past the soft peak stage. Turn the mixer speed down if necessary to keep egg whites moving. Once syrup reaches 115°C, remove from heat, turn mixer speed up to medium-high and slowly pour the syrup into the egg whites. Keep beating for 10 minutes until meringue is stiff, glossy and cool.
5. Divide the meringue into the ratio for the various colours, or follow this formula that I use for meringue: mass ratio by weight, I.e. weight of meringue/weight of mass=0.55. By following this formula, you will end up with a little meringue leftover, which can be used to stick the baking paper onto the tray. Fold the meringue into the masses in two additions, with the first addition using about a third of the portion. Do watch my video demo for the macaronage process and how to test if the batter is ready. Fold until batter moves in a slow-moving lava-like manner. 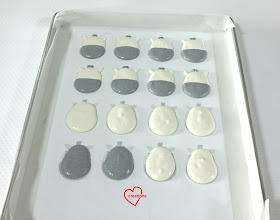 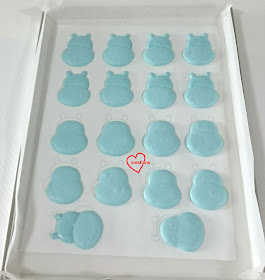 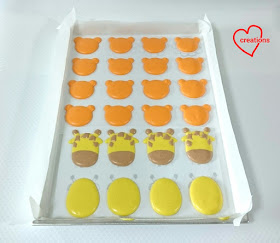 Tiger and giraffe piped! Ok I must admit that the number of animals is not the same for each type because I made these while baking macarons for my creative macaron book:p

7. Dry the piped shells under a fan or in an aircon room for 1-2 hours or until the shell is dry to touch.
8. Bake in preheated oven at 130°C for 17-22 minutes for white and light blue shells and 135°C for 17-22 minutes for orange and yellow shells with oven rack set at lowest or second lowest position. Bake for a few minutes more at 120°C if the shells are still stuck to the baking sheet. Let the shells cool before removing from baking sheet. They should be able to come off the sheets easily if properly baked. 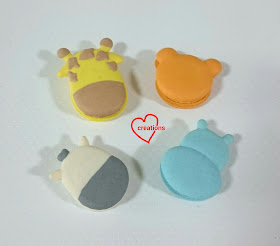 Decorate the shells with royal icing and edible marker. 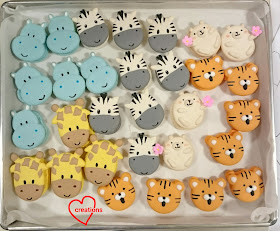 I made a few bears as well!

Fill the macarons with Milo swiss meringue buttercream. Recipe for the buttercream can be found here. 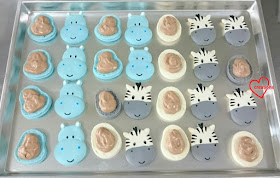 Refrigerate the macarons in an airtight container for at least 24h before serving.

Another look at these assembled cutie pies! 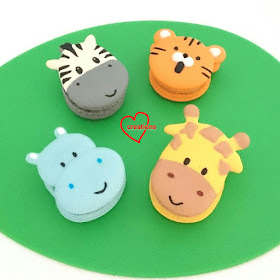 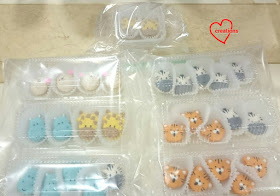