I have done some video tutorials for piping basic shapes earlier on. This is a sequel whereby I will show you how to pipe shapes that are complex, how to pipe 3D features on macaron shells and how to pull the batter for fine parts like hair of a character. 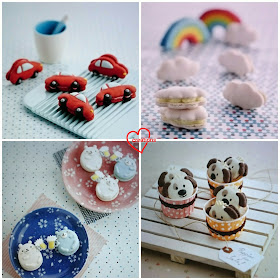 Completed macarons! Courtesy of the Marshall Cavendish team and Hongde photography that composed and took these photos during the photoshoot!


The examples shown here will be featured in my upcoming book on creative macarons, published by Marshall Cavendish :).

Earlier on, I took the photos of as-baked shells with all of them looking incomplete except for the clouds. The royal icing/edible marker decorating madness began only when I had completed baking all 30 types of designs. 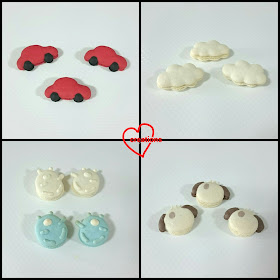 There are two ways to pipe complex shapes. The most commonly used is the trace-and-fill technique -  Trace the outline of the shape and fill the in-between spaces and center with batter. This technique is also used for non-circular shells shown in my earlier video for piping simple shapes. The example shown here is for a car. Due to the shape of the car, filling the center space is not required as the in-between spaces can be filled during the "tracing" step.


The cloud is broken down into a series of circles. End off the piping by filling the center. Remember to bang the tray on the table after piping.

Sometimes you may want pop-up features on a macaron shell e.g. snout and limbs of a bear in this example. Pipe the pop-up features after letting the base shell dry for 15 minutes under the fan or in an air-conditioned room until a thin membrane forms on the surface. This membrane may feel a little sticky to touch but the batter should not stick to your finger.


In order to make a cute character macaron, sometimes you have to pull the batter to create fine parts like pointy ears or hair on the head. Here's how it is done with a toothpick.

I hope this is helpful for you! These videos are linked to my Creative Baking: Macarons book!