This is one of those cakes that taste better than it looks :p. I made this 6" Pandan chiffon cake with Gula Melaka swiss meringue buttercream together with the large order of 40 longevity peach cupcakes :). All decorations are macaron shells except the leaves. 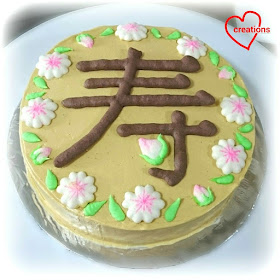 The lady who ordered this for her 90-year-old grandmother loved the design of a longevity peach themed cake I made last year and would like something similar. So this cake was modelled after my old one.

Since I had some leftover cake and a bit of cream, I made one small layered cake to eat at home and take a sample cross-section of the cake too! 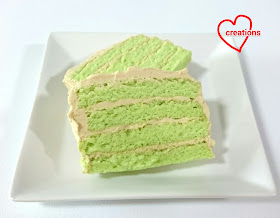 It's the first time I am decorating a cake with macarons because this order came at a really busy time, coinciding with photoshoot sessions for the chiffon cake book I am co-authoring with Susanne. With such a large quantity of longevity peaches to make as well, I decided to stick with simple decorations that can be made way ahead of time. Macaron shells freeze very well so it's the perfect choice :).

Macaron decorations
You may refer to this post for the macaron shell recipe for white and brown shells. I made these together with Brown and Cony macarons and froze them. Just to share some photos of the process... 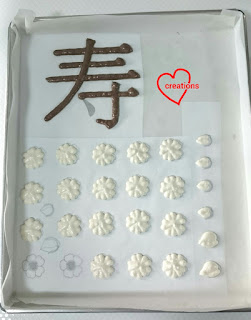 I dissolved some pink gel colouring in a little Vodka (Yay! Finally got some! Free too from a goodie bag :)) to make pink paint. I brushed on the pink flower patterns and pink shades on the peaches. I prepared some stiff green royal icing by adding some icing sugar to my stock of flooding consistency royal icing until I get the right piping consistency. I piped on the leaves using a piping bag with a corner snipped off. 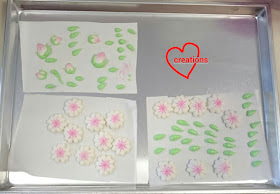 Painting in pink and icing with green royal icing

Begin by preparing Pandan juice. I don't measure exact amounts. Just roughly pick our about 20-30 Pandan leaves and blend with 100ml of water. I used more leaves this time as most are young and small. Strain out the juice and squeeze out any juice left in the pulp through a coffee filter. Let the juice collected sit in the fridge to settle for a few days. Use only the dark green layer that has settled at the bottom of the bowl. 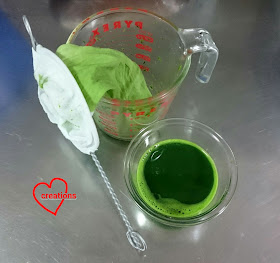 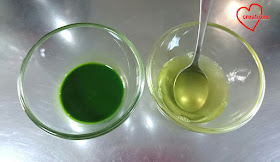 Separating the clear liquid layer from the dark green layer.

^ I actually baked more layers than needed just in case. I also didn't have more than one 6" round pan so I baked big layer cakes and used the 6" round pan to cut out circles. Edges are not neat but it's not an issue since the cake is going to be covered in cream. You could also bake a tall 6" cake and slice it across. Increase the baking time if you are doing it this way.

4. Quickly but gently fold in the meringue into egg yolk batter in three batches. Scoop the batter into the prepared trays. Tap the trays on the table a few times to release trapped air bubbles.

5. Bake for 12 minutes or until skewer comes out clean. Note that baking time may vary as each oven is different. Immediately remove from tray and peel off baking paper.

6. Cool the cakes before assembly or storage in the freezer. If you are freezing the layer cakes, place baking paper between layers and double cling-wrap the cakes, minimizing air space. Place the wrapped cakes in ziplock bags to ensure a really airtight storage. Improperly stored cakes in the freezer will result in dry cakes. 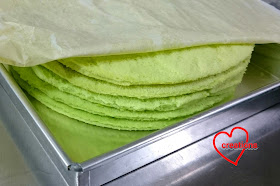 5 layers here but I only used 4 as I was afraid that there was not enough cream.

*I took the best of both recipes, replacing all white sugar with less brown sugar but increasing amount of Gula Melaka from one recipe, and including Pandan leaves in making the Gula Melaka syrup and some vanilla bean paste from another recipe. What you get is something that is not overly sweet but so full of flavour! I took the liberty of adding an extra hint of coconut flavour to up the notch in pleasuring your senses ;).

Steps:
1. Dissolve Gula Melaka in water with Pandan leaves over low heat in a small saucepan. Set aside to cool.
2. Place egg whites, brown sugar and salt in a heatproof metal bowl over a saucepan with 1" of water. Make sure bottom of bowl doesn't touch the water. Heat the saucepan with medium-low heat such that the water is gently simmering. Use a hand whisk to whisk the egg whites until temperature reaches 71.1°C (measure with candy thermometer) or until the mixture is warm and sugar is dissolved. Rub the egg whites between your fingers to see if it has dissolved.
3. Remove from heat and use electric mixer to beat on medium high speed until stiff peaks form and cooled. About 6-10 minutes. 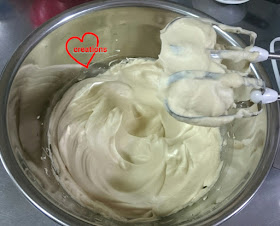 4. Add butter one cube at a time and keep beating. Don't worry if it starts to curdle. Just keep beating and adding the butter and it will all come together in the end. 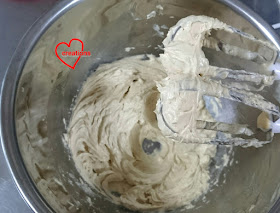 5. Add vanilla bean paste, coconut flavouring and Gula Melaka syrup 1 teaspoon at a time, beating well after each addition. Beat until light and fluffy. You may use it immediately or freeze/refrigerate until time to frost the cake. Just bring to room temperature and rewhip until fluffy before frosting the cake. 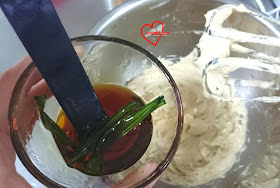 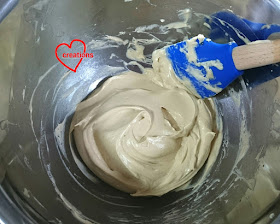 Yums!!! So yummy I ended up licking the spatula and bowl :p. After storing the smbc of course.

1. Place a layer of Pandan cake on cakeboard placed on turntable. Brush with some syrup (5g white sugar dissolved in 20ml hot water. I used a bit of Pandan water to impart some Pandan flavour.). Spread a thin layer of gula melaka smbc with a spatula. 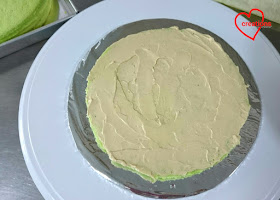 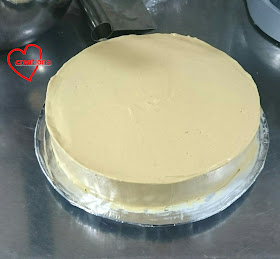 Pardon the not-so-good frosting with smbc as it's been a long time since I last frosted a cream cake :p. Thank God smbc is so much easier to work with than dairy cream!

Thank God that the cake was well received! My hubby who doesn't like cakes in general said this is yummy and not too sweet! 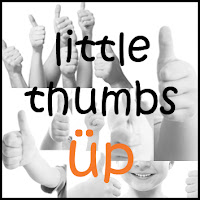 This post is linked to the event Little Thumbs Up ~ October 2015
Event Theme : Coconut
Organised by Zoe of Bake for Happy Kids and Doreen of My Little Favourite DIY
and hosted by Jess of Bakericious