You have seen cakes with cream and "naked" chiffon cakes like what we have on our blog. Here's a "new" type of cake that I came up with for my grandma's and aunt's birthdays. My aunt whose birthday is also around the corner celebrated at the same time too! Soft lychee chiffon sponge sandwiched with refreshing lychee rose pudding, topped with canned lychees stuffed with more pudding! If you can't imagine what this cake is like, think of Pandan kaya cake but lychee and rose flavoured instead :). And without the coconut milk! 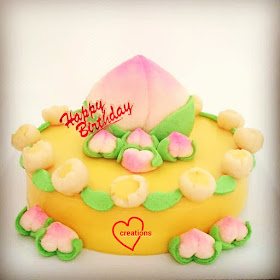 Here's a small slice of the cake cut by the waitresses at the restaurant that my extended family went to for the birthday celebration. 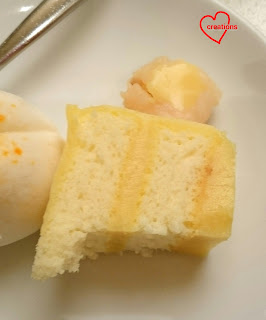 That's a teeny bit of liu sha 寿桃 from the restaurant that you see there on the left.

Everyone was "moaning" that they are too full after eating all the wonderful food from the restaurant but everyone finished their portion of cake because it's light, refreshing and not too sweet :). Everyone, both young and old, gave the cake a thumbs up so do give this recipe a try if you are looking for alternatives to creamed cakes but would not like plain chiffon sponge. I may look at doing other sponge & pudding cake flavours in the future as I think that this is a very good combination for birthday celebrations, especially if you have to eat cake after a sumptuous meal.

It's been a really busy period for me and the busyness continues even after the photoshoot for chiffon cakes is over as I still have to work on the macarons for photoshoot. My mum said just keep the cake for grandma simple and without the "寿” written on the cake. I made this cake along with another one with the same flavour for a friend's aunt, who is also my friend. Two cakes concurrently! Thank God I managed to finish both cakes in time despite some hiccups because of my experiment with filling macaron shells with pudding, which I will share in my post for the second cake in the near future.

This cake is made up of a few parts -- the peaches, two 9" round lychee chiffon sponge cakes, lychee rose pudding and stuffed lychees.

Please refer to this post for the recipe for peaches. I baked really mini ones in heart shaped ice cube tray like the ones for this cake, and a huge peach in the largest heart shaped silicone mould that I have (bought from Daiso). Bake the ice-cube tray peaches for 9 minutes at 150°C followed by 135°C for 5 minutes or until skewer comes out clean. Bake the large peach at 150°C for 9 minutes and 130°C for another 20-25 minutes. I placed a tray of water at the base of the oven to create steam during baking. Just to share some pictures of the process. 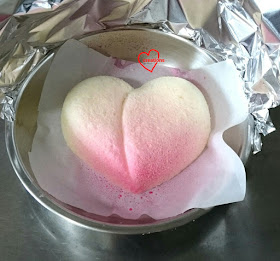 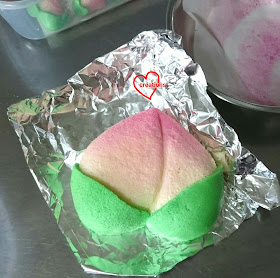 Adding on the leaves.

Steps:
1. Prepare baking tray of water at base of oven (optional). Preheat oven to 150°C. Line the base of both 9" pans with baking sheet.
2. Whisk egg yolks and sugar until pale and thick. Gradually add oil, followed by puree and flavourings and whisk until well combined. Gradually add in sifted flour and salt until no trace of flour is seen.
3. Prepare the meringue. In a clean metal bowl, beat egg whites with cream of tartar until stiff peaks form, gradually adding in sugar when meringue is at soft peak stage.
4. Quickly but gently fold the meringue into the egg yolk batter in three additions. Divide the batter equally for the two pans. Tap the pans on the table a few times.
5. Bake for 20 minutes or until skewer comes out clean. Cool in the pan for 5 minutes before removing onto cooling rack to cool completely with a sheet of baking paper over the cake.

1. Combine all ingredients in (B) in a jug and stir until custard powder dissolves.
2. Place all ingredients in (A) in saucepan and boil over medium low heat while stirring continuously.
3. Once the mixture boils, stir (B) again before slowly pouring into (A). Keep stirring while boiling. Remove from heat after the mixture boils for a minute, stirring continuously. 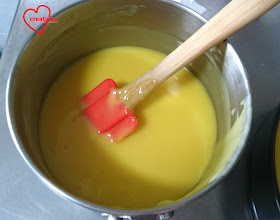 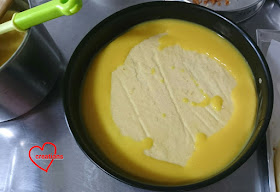 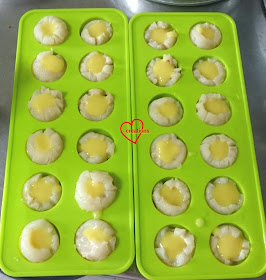 6. Carefully remove cake from springform pan and place on cakeboard. Decorate with longevity peach cakepops and canned stuffed lychees. I used toothpicks to secure the lychee to the cake.
7. Brush the longevity peaches with a bit of syrup from the canned lychees to keep them moist.

Keep the cake refrigerated until it is time to serve. The cake tastes better after storing in the fridge for a day after the flavours from the pudding and sponge have come together!