I have a request for a pretty large number of lychee flavoured longevity peach cupcakes together with a small longevity peach themed cake for a 90-year-old lady's birthday. I have updated the recipe to make the cake more fragrant. Original recipe can be found here. Here are four of the peaches... 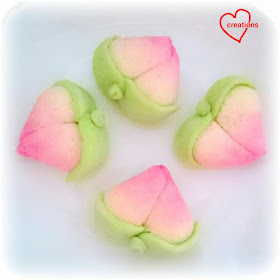 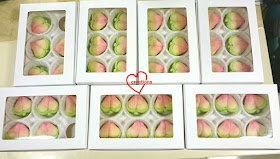 I must admit that it's a test of patience and endurance for me to make so many peaches. I usually make only 12 for a batch so this is a first for me. The peaches are baked in heart shaped Tovolo silicone moulds this time instead of the ones sold at Daiso.

Steps:
1. Line square pan with baking paper. Place silicone heart shape moulds on a large tray that fits into the oven. Prepare a baking tray of water at the bottom of the oven to create steam (optional). Set oven rack to second lowest position.

4. Make the meringue. You may want to divide the meringue ingredients into ratio of 1:3 as the green layer cakes and heart shaped cakes are baked at separate times. Beat egg whites and sugar in a clean metal bowl together with cream of tartar until soft peaks form. Gradually add sugar and beat until stiff peaks form.

5. Fold the meringue into each of the coloured batter in 3 additions, following the ratio above.

6. Bake layer cake at 160°C for 10-11 minutes or until skewer comes out clean. Bake hearts at 160°C for 5 minutes, followed by 140°C for 15 minutes, then 125°C for another 10-15 minutes. This baking time is for my thick-walled silicone heart shaped moulds. I used a different temperature setting for my earlier longevity peaches which were baked in thin-walled silicone moulds.

Note that baking times are approximate as each oven behaves differently. 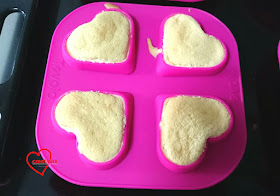 8. Use a small knife to make an indent for centerline. 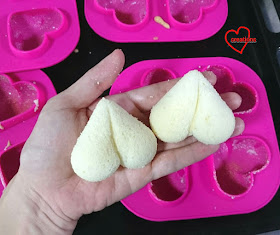 Assembly
1. Prepare the pink coloured paint for spray painting. I used a mixture of pink gel food colouring and natural food colouring dissolved in lychee syrup (from the can).

2. Dip a toothbrush in the paint, knock off the excess and spray it onto the peaches. 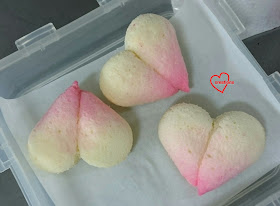 4. Melt some marshmellows with a sprinkle of water as the glue. Stick the leaves and stem onto the peaches using the glue. Brush the peaches with a bit of lychee syrup. Store in airtight container in the fridge.

My parents had some extra peaches and they loved it! Working on the peaches was made more pleasant for me because the cupcakes were really fragrant!

Thank God that the cupcakes were well received at the party!