My friend loved the longevity peach cake design I made for my grandma last year and wanted the same design for her father-in-law's birthday, but with a completely different flavour. Lychee flavour was requested so here's my version of longevity peach cake made entirely out of soft chiffon cake! 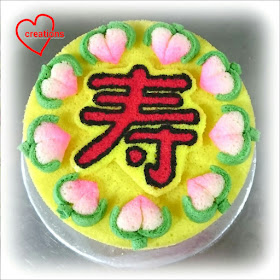 Previously before I figured out how to make chiffon cake peaches, I used snowskin mooncakes. It was a "slap-forehead" moment because the way to make chiffon peaches is similar to the snowskin version. Being an adventurous baker, as those of you who have followed our blog know, I decided to try something new with the hidden surprise inside the hole of the chiffon cake. I thought why not include a lychee flavoured dessert which is refreshing to be eaten with the cake, perhaps lychee stuffed with something. When I did a search on the internet, I only found lychees stuffed with cream cheese. I didn't think the elderly would appreciate that. So I experimented with lychee pudding, adapted from my Pandan kaya recipe but with lychee and a hint of rose flavour. It is so lovely I have to share it with you! My family members who tried it loved it very much! The rose water added here is to enhance the lychee flavour and not to overpower it so the rose flavour is mild. Because the amount of pudding stuffed in the lychees is small, you won't taste it much but I can imagine it served in larger proportions with succulent lychees! 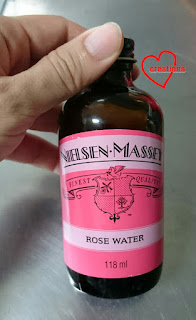 I use good stuff in my bakes!

Longevity peaches
I changed the proportion of ingredients for the teeny peaches but method is the same as the one posted here. Here's the revised recipe.

Some photos of the process... 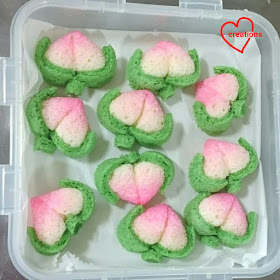 *omit if don't have and replace with gel food colouring. Or omit colouring totally.

4. Prepare meringue for pattern. Beat egg white with cream of tartar until stiff peak forms, gradually adding in sugar. Quickly but gently fold 4 tbs of meringue into red batter in 3 additions. Transfer to piping bag fitted with a Wilton #5 or #7 tip. Carefully pipe the 寿 on in a thick layer. Bake for 2 minutes if using baking sheet and 3 minutes if using silicone mat. 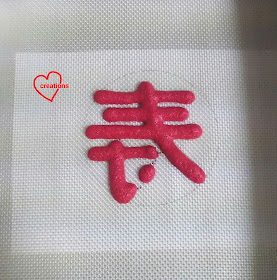 5. Prepare meringue and batter for layer cake the same way as step 4, using the smaller portion of egg yolk batter and adding any leftover meringue from step 4 into freshly beaten meringue. Pour the batter slowly over the pattern. Tap the tray a few times on table to release trapped air. Bake for 13-14 minutes or until skewer comes out clean. Immediately remove from tray and cool with another baking sheet over it. Reduce oven temperature to 150°C.

6. Prepare meringue and batter for 17cm chiffon cake the same way as step 4. Bake at 150°C for 15 minutes, then 140°C for 20 minutes and finally 130°C for 10-20 minutes or until skewer comes out clean. Immediately invert to cool. Carefully unmould by hand when cooled. 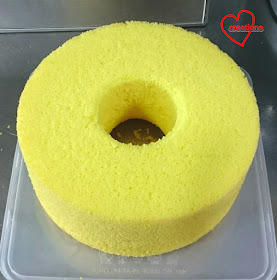 Note that the portion here is small. You may upsize it.
Update: I realised that fresh milk separates when boiled, creating a slightly grainy texture to the pudding. Using diluted evaporated milk helps to create a smooth textured pudding. 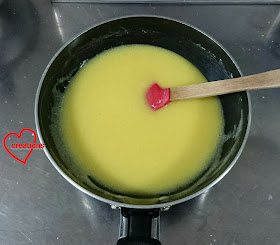 4. Let the pudding cool while stirring frequently. When you feel that it is cool enough to touch without scalding yourself, transfer into piping bag/ziplock bag and fill the lychees with pudding.

5. Refrigerate the stuffed lychees for about an hour uncovered. 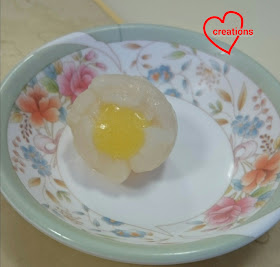 Yums! The pudding is good enough to eat it on its own!

Fill the hole in chiffon cake with stuffed lychees 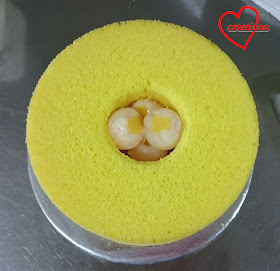 Place the peaches around the circumference of the cake and cover the hole with the 寿 patterned cake. I cut out the word from the layer cake and used charcoal powder dissolved in some water to paint on the black border using a toothpick.

Use melted marshmellows to secure the peaches on the cake. Brush the peaches and layer cake with some syrup (5g sugar dissolved in 20g canned lychee syrup) to prevent the small or thin parts from drying out. Store in airtight condition in the fridge.

The fudge is so good that if anyone wants a lychee rose version of Pandan kaya cake (layered lychee sponge and lychee fudge), I am sure it will be a hit! In fact, I think I may do that for grandma's 80th birthday :). Update: Here's the post for my grandma's cake! Indeed it was a hit and everyone finished their portion despite moaning that they were too full to eat after a sumptuous birthday meal!

My friend's family loved the looks and taste of the cake! The combination of juicy stuffed lychee eaten with soft and light chiffon sponge was great :).