After studying quite a few recipes for generic steamed cakes ( including the famous Junko and Nutella Blossom ones) and banana steamed cakes, and a couple of less-than-satiafactory trials, I have finally found a recipe that is fluffy, moist and flavourful, simple and with few ingredients. Why this requirement? I am looking at making a simple, healthy and delicious steamed cake for my next culinary arts demo class at church as and when I am free to conduct. Probably after all the mad busyness of writing and photo-taking for the two books I am working on now.

Presenting my humble cat and bear steamed banana cupcakes! These by the way, make very good Children's Day party items too but perhaps made in smaller cupcake cases than the ones shown in this post. This is also healthier than my pinata cookies :p. 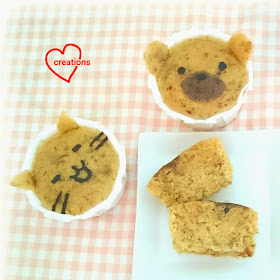 Here's a close-up view of the texture... 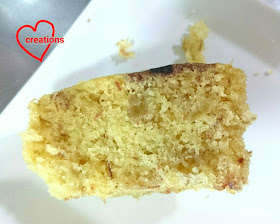 Fluffy and loaded with bananas!

I have opted for a method that involves more than just combining wet and dry ingredients together with a hand whisk because I find that the texture of the resulting cake is less fluffy and more "kueh-like".  Even for the fluffy ones, they tend to be dry when cooled as they rely on low liquid and high flour content to be fluffy. Upon cooling and storage, the cake has to be re-steamed for it to taste good again and has to be eaten freshly steamed while hot.

The recipe here is mainly adapted from Miss B. I have tweaked the recipe a bit and added a fun twist to the humble steamed banana cake. Using the technique for creating patterns and pop-up ears from various sources, I have transformed the plain looking banana cake to something a little cuter ;). I have already reduced the amount of sugar from the original recipe so there is no need to reduce it further. The resulting cake is not too sweet.

* You may replace all these with 70g of self-raising flour. I chose cake flour for a softer texture.

** You may use smaller cupcake cases as I used pretty large ones. Reduce steaming time of you are using smaller cases. Feel free to upsize the recipe too to make more cupcakes.

Steps:
1. Beat egg and sugar with an electric mixer at high speed for at least 10 minutes until mixture is pale and thick. 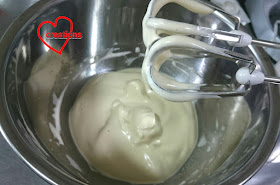 3. Add mashed bananas and vanilla a teaspoonful at a time and gently fold into the mixture.

4. Sift together flour, baking powder, baking soda and salt. Gradually add the flour mixture to the batter, folding in gently with each addition with a spatula. 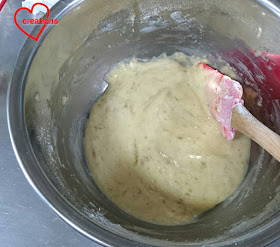 5. Scoop the batter into paper cupcake liners and fill until almost full. You may add a heaping teaspoon worth of Nutella into each cupcake after filling the cupcake liners till it's about 1/3-1/2 full. This helps to moisten the cakes even more and compliments the banana flavour well.

6. If you are steaming the cakes without fancy designs, you may steam at this point after tapping the cupcake cases on the table to release trapped air. Steam for about 20-25 minutes or until toothpick comes out clean/ with a few moist crumbs. If you are making the patterned cupcakes, scoop out about 1-2 tsp of the batter and colour it with cocoa powder until you have the desired shade of brown that you want. Transfer the coloured batter into piping bags and pipe the facial features on.

7. To create pop-up ears, pipe a bit of the batter onto the parchment paper (I used paper cupcake cases). Pipe triangle for the cat and circle for the bear ears. Steam this together with the cupcakes. 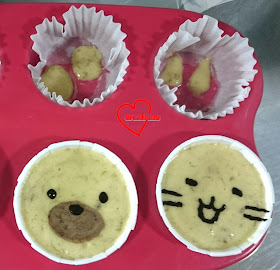 8. Carefully peel the ears off the parchment paper and stuff it into the cupcake cases where the ears are supposed to be. 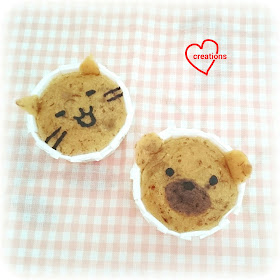