I have a request for Mickey Mouse gloves and pants macarons along with Mickey and Minnie Mouse cookiepops. Here they are :) 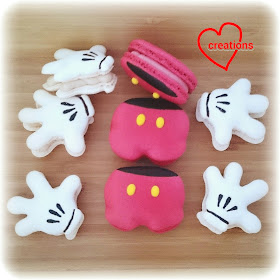 I was told that these were promptly snatched up at the party! Thank God they were well received :).

*Ingredients for food colouring/flavouring that can be omitted. Just use gel food colouring if you are unable to obtain red yeast and beetroot powder

Steps:
1. Sift together ground almond and icing sugar. Divide into two portions. Place glove and pants templates on baking tray and line with baking sheet. If the sheet does not lie flat on the tray, use a bit of Italian meringue to stick it down.

3. Add sifted white powdered coloring to the other almond mixture. Add 40g of egg whites and caramel essence and mix well until a mass forms. You may use white gel colouring or omit the use of colouring.

4. Make the Italian meringue. Heat caster sugar and water in a small saucepan without stirring once the water boils. At the same time, beat 80g of egg whites at medium low speed with electric mixer until foamy. Do not beat the egg whites beyond soft peak stage. Reduce mixer speed if necessary. Boil syrup until temperature reaches 115°C. Remove from heat. Increase mixer speed to high and slowly pour syrup into the egg whites, avoiding the beaters. Keep beating on high speed for 10-12 minutes until meringue is cool, stiff and glossy. Divide the meringue into two equal portions.

5. Fold the meringue into the mass in two additions, leaving about 2 tbs of meringue unused for each batter. First addition is about 1/3 of the meringue to lighten up the batter before adding the rest. Work on one coloured batter and complete piping out before folding the meringue into the other mass. The consistency should be such that the batter flows in a slightly discontinuous manner off the spatula, I.e. under folded. Checkout my video tutorials for the macaronage process. 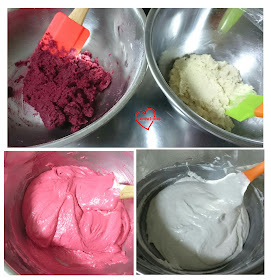 The masses and macaron batter

6. Transfer the batter into piping bag. I used a Wilton #12 round tip to pipe out the pants. 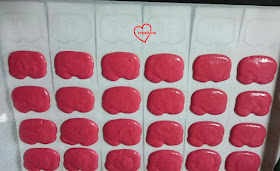 I used a Wilton #10 round tip to pipe the main part of the gloves, air-dry for 15 minutes before piping the base of the glove with #5 round tip. 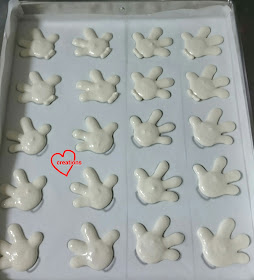 Tap the tray hard on the table to release any trapped air bubbles after piping.

7. Dry the shells for 2 hours or until the surface is no longer sticky to touch in an air con room.

8. Bake the pants at 130-140°C for 17-22 minutes with the rack at second lowest position in the oven. Rotate the tray halfway through baking. Let the shells cool on the tray before attempting to remove them. The shells should lift off easily from baking sheet. If it is still stuck, it's under baked. Bake for another 5 minutes at 120-130°C before checking again. Repeat if necessary. 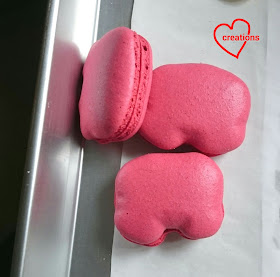 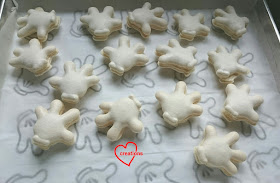 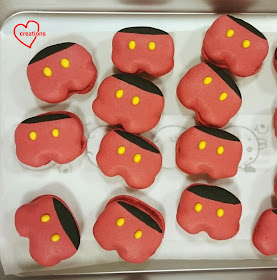 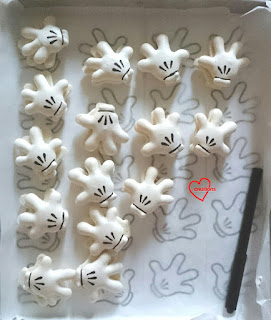 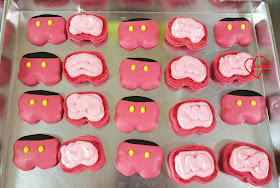 I doubled the amount of strawberry emulco used 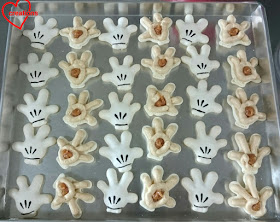 I omitted the earl grey.

Keep the assembled macarons in airtight container and refrigerated for at least 24 h before consuming. 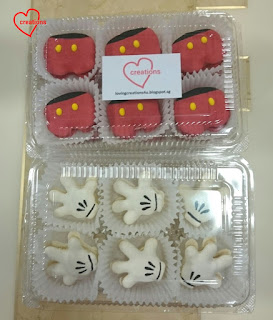 I made cute Molang with some leftover white macaron batter. Do check out those! I made something else with leftover red batter to freeze for another party since macaron shells freeze well. Will post about that when the time comes!