It's macaron mania for me again! But will try to intersperse the posts with other bakes so you don't get tired of seeing macarons all the time :p. I have a request for crab shaped macarons with salted egg yolk filling. I was quite excited about trying out this flavour as it is exotic and Asian. Perhaps something akin to 流沙包 (liu sha bao, salted egg yolk custard steamed bun) that is a popular Dim Sum item. Having no recipe as reference on the internet but some experience in making 流沙包 (liu sha bao), I was trying to decide between swiss meringue buttercream (smbc) and custard/ pastry cream as the filling base and finally decided on smbc after consulting hubby which texture would be nicer. He's got a better palate than me :). Here are my salted egg yolk crabs! 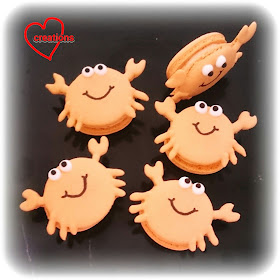 Natural colouring was used as far as possible as requested. I used a mixture of pink and yellow Queen's natural food colouring.

Some artificial colouring still had to be added for a more vibrant colour but not as much is needed.

Update 20/8/2015: Do checkout my video tutorial for macaronage and testing of batter consistency!

**Doubling the recipe may make it easier for making Italian meringue.
* Omit if don't have. Replace with gel coloring.

Steps:
1. Prepare template of crabs on baking tray with baking sheet over it. Use italian meringue to stick the baking sheet down if it is not flat. Sift together almond, icing sugar and coloured powder. (Top left picture below)

3. Prepare the Italian meringue. Heat caster sugar and water in a small saucepan while beating the rest of the egg whites in a clean metal bowl at medium low speed. Do not beat beyond soft peak stage. Reduce mixer speed if necessary. Do not stir the syrup once it boils. Once temperature reaches 115°C, remove from heat, increase mixer speed to high and slowly pour the syrup into the egg whites. Make sure the syrup doesn't fall on the beaters. Keep beating for another 10-12 minutes until stiff, glossy and cool.

4. Fold the meringue into the mass in two additions, adding about 1/3 for first addition. Picture on bottom left shows batter after first addition of meringue. You may add more colouring at this stage if necessary and don't really have to be careful with the way you fold. Just use the fold and press motion until the batter looks even. Leave about 2 tbs of meringue unused. Carefully fold in the rest of the meringue until it falls off the batter in a slow moving lava-like manner but not continuous. Underfold batter a little for macarons with fancy shapes. Bottom right picture shows the completed macaron batter. 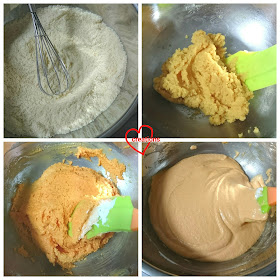 5. Transfer about 2tbs of batter into piping bag fitted with Wilton #5 round tip. Transfer the rest of the batter into another piping bag fitted with a Wilton #12 round tip. Pipe ovals for the crab's body using the bigger tip. Tap the tray hard on the table a few times. Finish piping all the bodies before starting on the pincers and legs. Use the smaller tip to pipe the pincers and legs. Use a toothpick to pull the batter for the pincers. 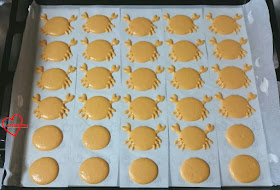 Freshly piped! Note the dollops of Italian meringue used to hold the baking sheet down.

6. Dry the shells in aircon room for 1.5-2 hours or until tops of shells are dry to touch when you run a finger across the surface of the shells.

7. Bake the shells in preheated oven at 130°C for 17-22 minutes with the oven rack at lowest or second lowest position. Let the shells cool before attempting to remove. Bake for 5 minutes more if the shells are still stuck and check again.

You may check out this post for some detailed tips on macarons shell preparation techniques.

I made the crab eyes by piping some white royal icing onto baking sheet and oven drying with fan on for half an hour. I turned on the heat for a few seconds before switching it off. Make sure the icing is completely dry before attempting to remove from baking sheet. Stick the eyes onto the shells using a bit of royal icing. 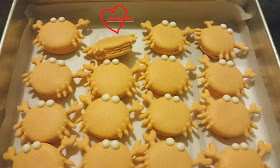 Crabs with whites of eyes!

Use black royal icing to add in the blacks. I used charcoal to colour black. Draw the mouth using black edible marker or black icing. 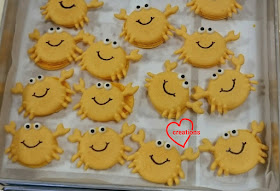 *** you may add one more salted egg yolk as I personally find this attempt quite mild in taste but nicely sweet and slightly salty at the same time :).

Steps:
1. Add milk to mashed salted egg yolk and mix well. Press through a sieve to break up and get rid of big lumps. Set aside. 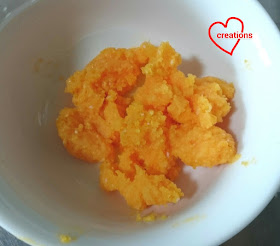 2. Prepare the smbc. Place egg white, salt and sugar in a metal bowl over a saucepan filled with about 1" of water. Make sure that the bottom of the bowl is not touching the water. Heat the saucepan over medium low heat while using a hand whisk to whisk the egg whites until foamy. Keep the egg whites moving. When the temperature reaches 71.1°C, remove from heat and beat on high speed with electric mixer until cool, stiff and glossy. About 10 minutes with a damp towel placed under the bowl to speed up the cooling.

3. Add butter one piece at a time to the meringue and beat until incorporated after each addition. Don't panic if it starts to curdle. Just keep beating and adding butter. It will all come together towards the end. Keep beating until you get a smooth cream. 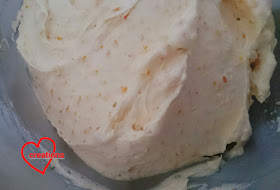 As with all smbc, you may make this ahead of time and freeze it. Just thaw and rewhip before filling the macaron shells. 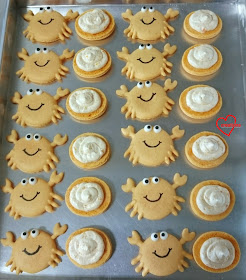 Filling up the shells! 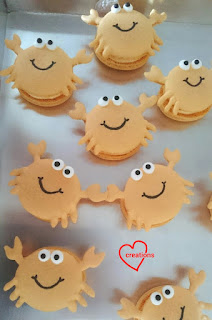 Store in airtight container in the fridge for at least 24h before consuming. 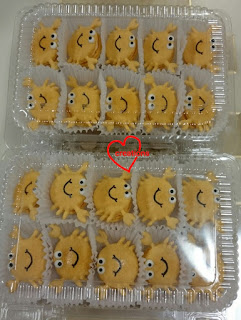 I didn't use up all the orange batter to make crabs. Keep a lookout for another sea creature in my next macaron post that I made with extra batter. Clownfish!

Thank God that the recipient loved the look and taste of these crabs! I was a little apprehensive about how it would be received since it's my first attempt at this exotic flavour. She commented that they were tasty and not too sweet! I guess it's quite a feat for macarons not to be too sweet :p.

She has kindly shared a photo of the crabs at the party :) 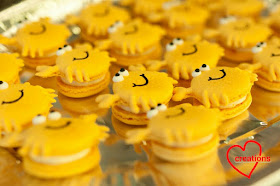