I couldn't resist making a school of clownfish with orange coloured batter leftover from my crab macarons bake. Here they are! 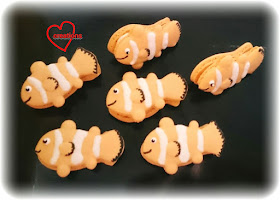 My friend wanted whatever excess macarons I have from my big batch of bake but needed the filling to be able to withstand room temperature storage as she was giving away the macarons as gifts. I immediately thought of using melted chocolate as the filling base and spicing it up with a dash of peppermint.

Please refer to my crab macarons post for the recipe. Prepare a small portion of uncoloured/white batter (about 1/8 of the portion for orange batter) to create the stripes. But if you prefer not to have the hassle of preparing two types of batter, you can always add on the white stripes with royal icing after baking the shells. I wanted to take up the challenge of creating the fish almost entirely out of macaron batter. 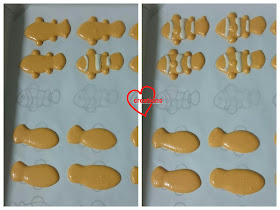 Bake for 17-22 minutes at 130°C or until the shells are able to lift off the baking sheet easily. 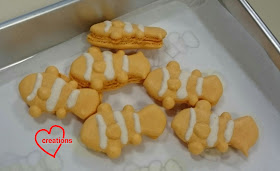 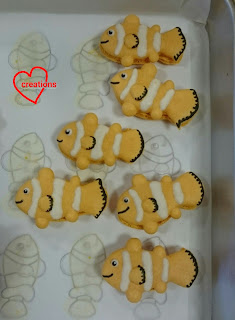 Dab the inner surfaces of the shells with a little peppermint essence using a small brush.

* I made enough filling for about 10 macarons so do scale accordingly to the size of your batch of macarons. Or use another filling if refrigeration is not an issue :).

Melt the white chocolate chips using the microwave oven, stirring in between 10 second bursts of heating at medium power. Alternatively, melt by double-boiling. Just make sure the water doesn't touch the base of the bowl containing the chocolate. Add peppermint essence and keep stirring until smooth and well combined.

Pipe the melted chocolate onto the shells. 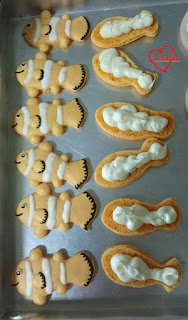 Wait for the chocolate to set after assembly. You may speed it up by placing in the fridge for half an hour.

Store in airtight container in cool and dry place.