I have a request for Mickey and Minnie macarons again! They seem rather popular. 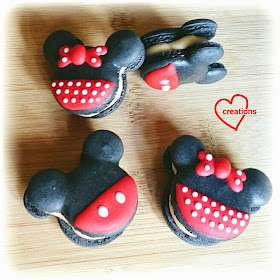 They look similar to my previous attempts here and here but the flavour is different. As caramel flavour was requested, there's no cocoa powder added to the shells and I had to make the caramel instead of Oreo cookies and cream buttercream for the filling.

I realized I haven't posted how I age my egg whites in any of my macaron posts. Here's how I do it. I place egg whites in a bowl and cover with paper towel secured with a rubber band. Finally, cover the bowl with cling wrap (no need to be tight) and place in the fridge until you want to use it. The paper towel absorbs any moisture that the egg whites release during storage without dripping back into the bowl. That way your egg whites will slowly lose moisture over the few days of aging in the fridge. Remember to let the egg whites come to room temperature before using.

2. Prepare the Italian meringue. Heat the caster sugar and water in a small saucepan. Do not stir once all the sugar has dissolved to prevent crystalization. At the same time, beat the other portion of egg whites using an electric mixer. Do not beat it beyond soft peak stage. Reduce mixer speed if necessary but keep moving the egg whites. When syrup reaches 115°C, take it off the heat, turn up mixer speed to high and slowly pour the syrup in, taking care to avoid the beaters. Continue beating on high speed for 10-12 minutes until the meringue cools and is glossy and forms firm/stiff peaks.

3. Fold the meringue into the mass in 2 batches. Fold in 1/3 for the first batch. Use a fold and press motion. I left about 1/4 cup of meringue unused. When the batter is able to fall off the spatula in an almost continuous manner, it is ready. Do watch a video demo for a good gauge of the right consistency.

4. Transfer the batter into piping bag fitted with a 5-6mm round tip. Pipe out the shells onto trays lined with baking sheet. Place the Mickey template under the baking sheet. Tap the tray to release trapped air bubbles. Don't be shy to tap hard. It helps to flatten any "nipples" on the shells too. 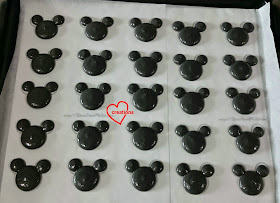 5. Let the shells dry in an air con room for about 2 hours. When the shells are no longer sticky to touch, they are ready to be baked. I didn't use oven drying as I had another batch of macarons to make at the same time.

6. Bake at 130-140°C for 17-22 minutes at second lower rack. Rotate the tray halfway though baking if your oven heat distribution is uneven. Let the shells cool for 5 minutes before attempting to remove from tray.

Freshly baked! The template shifted after I tapped the tray so the shells look displaced :p

When the shells have cooled, ice them with royal icing. 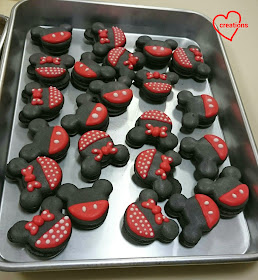 All red was requested this time

Instead of using the recipe I used previously for salted caramel macarons, I decided to try whipped caramel. This eliminates the need to prepare swiss meringue buttercream separately while still retaining a lighter-textured filling.

1. Heat up the whipping cream until it starts to bubble a bit and set aside. At the same time, heat the sugar and water in a heavy-based saucepan, preferably light coloured. You may stir the mixture to help the sugar to dissolve but stop once all sugar has dissolved. Carefully watch the colour of the syrup. Once it has turned golden in colour, take it off the heat.

2. Gradually add the cream and stir quickly with a long wooden spoon. Be careful as the mixture will bubble violently. Just keep stirring and it will calm down after a while. A deep saucepan is helpful here. 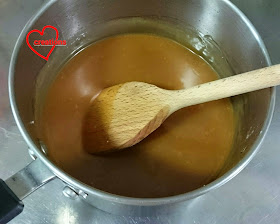 4. Pour the caramel into a mixing bowl and chill it in the fridge until it firms up (about an hour or more). Whip it with an electric mixer until light and fluffy. 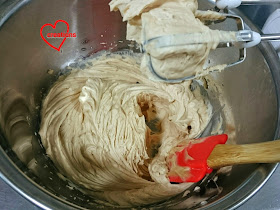 Pipe the whipped caramel onto the shells. 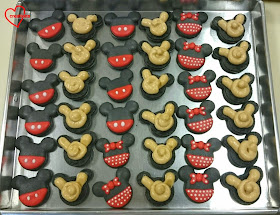 
Refrigerate the assembled macarons for at least 24 hours before serving. 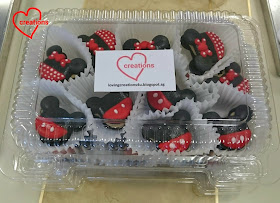