Lavendar scented blue heels and rose scented pink heels with naturally coloured and flavoured floral swiss meringue buttercream (smbc)! Yes, these are macarons! Probably the first high heels version because when I did a search for high heels or killer heels macarons on the internet, I couldn't find any...and I can understand why... 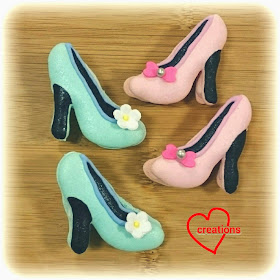 Not only are these footwear "killer" for the feet, they were also a killer to pipe! I was risking making macarons with no feet so I was thankful that any appeared on the macs at all. These dainty footwear wannabes are for a young lady's 6th birthday.

What's new about this batch is I made use of blue pea flower to colour the batter for blue shells and buttercream, and made use of natural sources to flavour and colour as far as possible. Beetroot powder was used to colour the rose buttercream. I used dried lavendar and rose flowers to impart the flavours instead of using floral extracts or rosewater, which most of the recipes from the internet suggest. The result is still very fragrant! Hubby remarked that the rose ones taste like Bandung!

This is how I coloured the macaron batter with blue pea flower.... 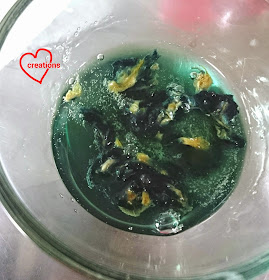 You may skip this unorthodox way of colouring the macaron shell if you prefer to colour the water used for the Italian meringue. I was lazy to prepare a separate batch of Italian meringue for pink coloured shells :p. It's another 15 minutes or so of extra work plus extra washing up to do (I only have one stand mixer), which I wasn't willing to do. Because of my laziness, I came up with this unorthodox way of colouring a portion of egg whites.

The shells were flavoured by using icing sugar that has been stored with dried rose or lavendar for a month. The aroma is pretty strong!

Dried rosebuds and lavendar with icing sugar in glass jars.

Update 20/8/2015: do check out my video tutorial for macaronage and testing of batter consistency!

Steps:
1. Place high heels template under baking sheet on baking trays. I printed my own on A4 paper. Steep the blue pea flowers in 42g of egg whites for an hour (optional if you don't have blue pea flowers). Remove the flowers. Sift together almond and icing sugar in two separate large bowls, one for each flavour. Add 40g of egg whites to each portion and mix well to form the mass. Add a drop of food coloring and mix well. 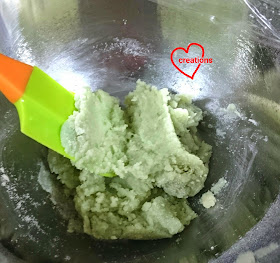 2. Prepare the Italian meringue. Place the caster sugar and water in a small saucepan and heat it over medium heat. Do not stir once all sugar has dissolved. At the same time, beat 80g of egg whites in a clean metal bowl at medium-low speed with electric mixer. Do not beat beyond soft peak stage. Slow down mixer speed if necessary. Once syrup reaches 115°C, remove from heat and turn up mixer speed to high. Slowly pour syrup into egg whites, avoiding the beaters. Continue beating for another 10-12 minutes until the meringue is stiff, glossy and cool.

3. Fold the meringue into the masses in two additions. Work on one batter (complete piping) before the other. The Italian meringue is very stable and can be left out sitting on the counter for a long time. Use a fold and press motion to fold in the meringue until just combined and falls off the spatula slowly but in a discontinuous manner. Usually you should fold until the batter is just able to fall off the spatula in a continuous manner. But for these heels, the batter should be under folded. Do watch a video demo of this macaronage process to have a better idea of consistencies.

The masses, italuan meringue and macaron batter. The masses are actually not so neon colored as seen in the photo. 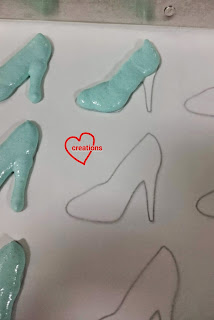 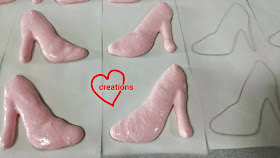 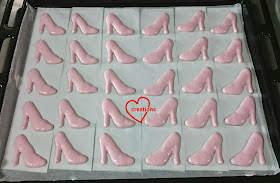 5. Dry the shells in oven at 60°C fan mode or dry in air con room for 2 hours or until the shells are dry to touch. I used air con drying as I had other macarons to pipe and koda to look after as well.

6. Preheat oven to 130°C with the rack at the bottom level. Bake for 18-20 minutes, rotating the tray halfway through baking. Bake for a longer time at 120°C if the shells appear to be browning but doesn't look dry yet at the base. 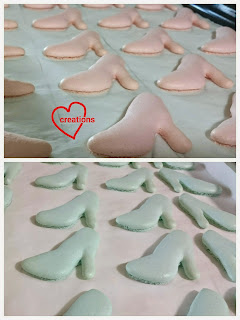 Let the shells cool on the tray for at least 5 minutes before attempting to remove from tray.

Just as a comparison, checkout these plain round macarons that I made with leftover batter...

Much nicer feet on simple rounds!

As I mentioned before, the more an object deviates from the circle shape, the higher the risk of "overfolding" when piping out the batter.

Decorate the heels with royal icing and some cupcake sprinkles. I used black edible marker to add in the black portions of the heels. 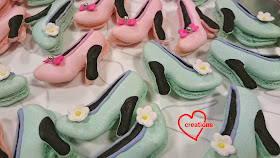 ^^ recipe for smbc can be found here. Omit the vanilla extract and lemon if you wish.
** replace with gel food coloring or omit if you wish.

Steps:
1. Place lavendar and blue pea flower in one small bowl, and rosebuds and beetroot powder in another. Heat up the milk and pour about 35g of milk in each bowl. Steep the flowers in it for about half an hour.

2. Stir the milk in the bowls and strain out the flowers, squeezing as much milk out as possible.

3. Add 12g of lavendar milk to one portion of smbc and 14g of rose milk to the other portion. Add in about 2g at a time, mixing well with a spatula or whisk before adding more. Don't add in all at once or it will be hard to incorporate. 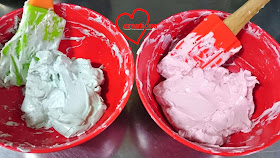 Fill up the macaron shells with the respective smbc. 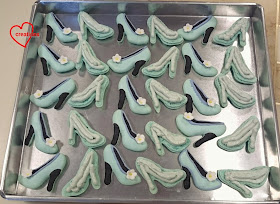 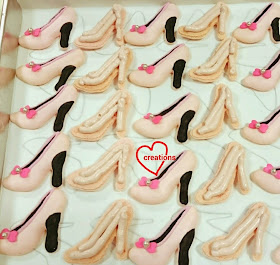 Refrigerate assembled shells for at least 24h before consuming. 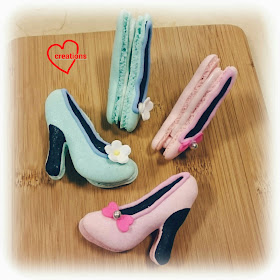 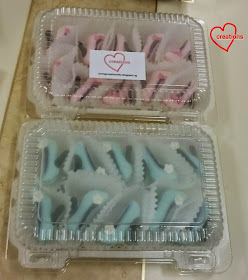 Of course I couldn't resist the chance to play with leftover batter :). I didn't simply pipe circles. I ran out of templates that's why I made those. Keep a lookout for cute Care Bears and Little Twin Stars macarons!