This is the third and last in a series of Peppa pig themed bake. I apologise for the lack of good photos for these cupcakes as I was in a hurry. Like Susanne, it has been a struggle for me to juggle family, cooking, housework and coaching of all subjects for kids' school work with this new school year on top of baking, so I am making a conscious effort to cut down on the number of baking requests I am accepting. I will be glad to take on any requests if I can cope and be assured that I will still bake to the best of my abilities :). Here's some of the Peppa cuppies! 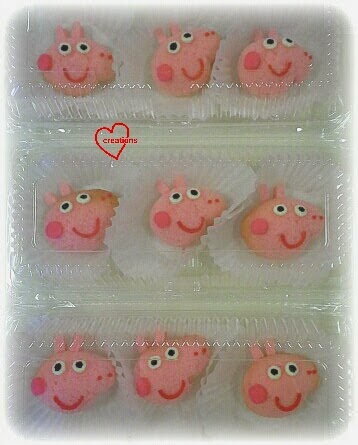 The characteristic head shape is made with the help of eggshells so yes, each Peppa head was baked in an eggshell!

Lychee flavour was requested so I made some lychee puree... 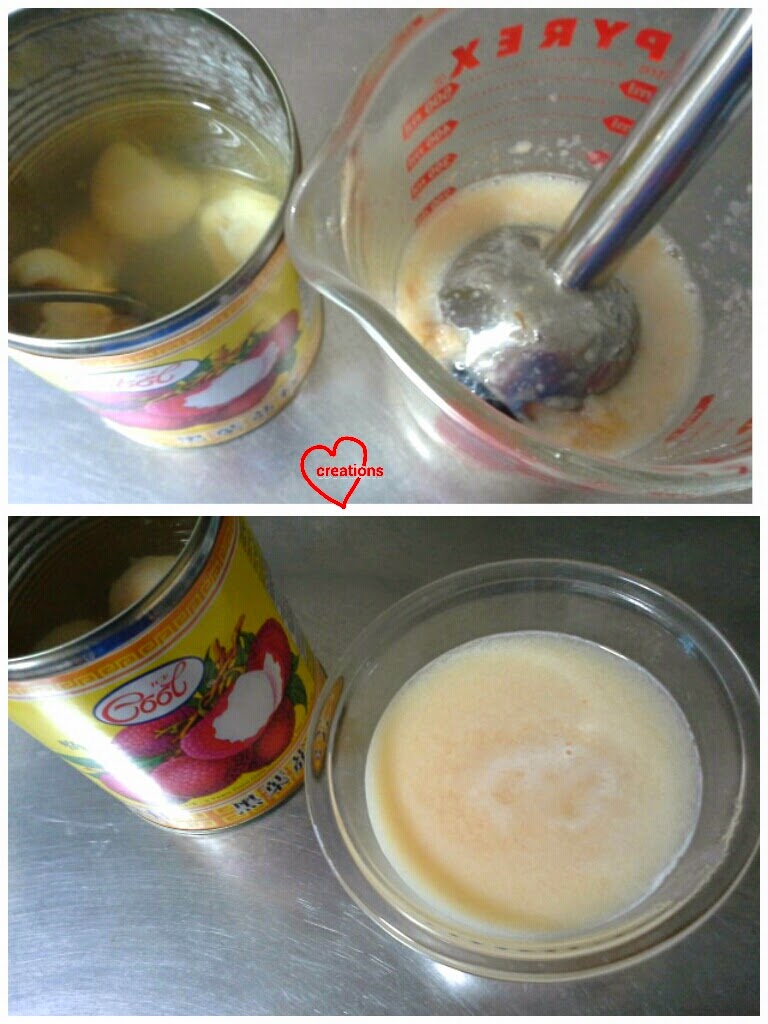 I couldn't get hold of fresh lychees so I used canned ones. The good thing about this is the lychees can be blended in syrup that is saturated with lychee flavour, thus increasing the lychee flavour in the cakes. I didn't measure the exact amounts. I just blended about 9 lychees in enough syrup to cover the fruits.

Steps:
1. Line 7" tray with baking sheet and arrange eggshells on a mini muffin pan lined with silicone cupcake moulds or use aluminium foil with holes poked in covering a baking tray to be your eggshell holder if you don't have what I used. Preheat oven to 160°C and set rack to second lowest position. The 7" tray is for the layer cake for Peppa's head features like eyes, ears, rosy cheek, mouth and nostrils. Make sure that the inner membrane of the eggshell is removed. 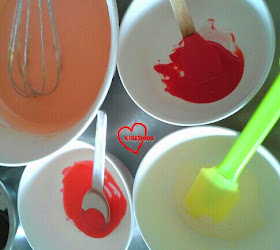 5. You may find it easier to transfer the main batter into a piping bag or batter dispenser to quickly fill all the eggshells to about 1/2-2/3 full. Scoop out the three coloured batter and some of the main batter into the 7" tray. Bake the layer cake for 10 minutes or until skewer comes out clean. Bake egg shells for 10 minutes at 160°C followed by 140°C for 7-10 minutes. Baking time may vary according to size of eggshells used. Mine were 60-65g eggs.

6. Immediately remove layer cake from pan and gently peel off baking sheet. Cool with another sheet over it. Leave egg shells to cool completely before cracking the shells and carefully removing them. Use a small sharp knife to make a cut on the eggshell baked cake to create the snout and face of Peppa. 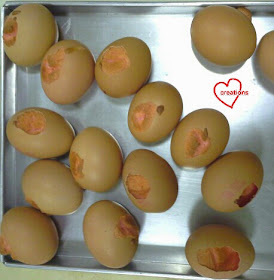 7. Melt some marshmellows with a bit of water as glue to stick on the ears, eyes, rosy cheeks, mouth and nostrils. It was quite challenging to stick the mouth and nostrils on since the parts are so small and thin! Keep a small bowl of syrup handy to keep the cakes moist by brushing syrup on. Do use the lychee syrup if you have! It will enhance the lychee flavour of the cakes. Keep the cakes and small parts covered to prevent them from drying out. Dissolve some charcoal powder in water to make black ink. Use a chopstick to stamp on the blacks of the eyes. 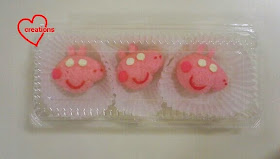 Almost done! A little spooky without the blacks of eyes...hehe.. 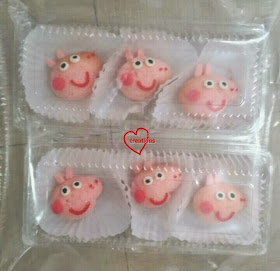 It was tiring and challenging to complete all three sets of Peppa themed bakes (cookies, macarons and cupcakes) for one party but very rewarding to receive very good reviews for the bakes :).