I was supposed to make a batch of Mickey and Minnie cookies for a little boy's birthday party but a very talented baker friend inspired me to try macarons instead! Presenting my Mickey and Minnie Mouse Oreo cookies and cream macarons! 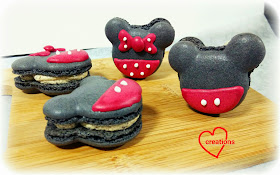 I must admit that I was pretty nervous about making macarons after a break from making them for half a year. Thank God they turned out well! All nicely smooth, no cracks and having beautiful feet!

My friend kindly provided the recipe that she used and tips on making the macarons. I adapted the recipe from Cakelets and Doilies.


I printed some Mickey mouse templates to help with getting consistent shapes and sizes. The templates were placed under the baking sheets. 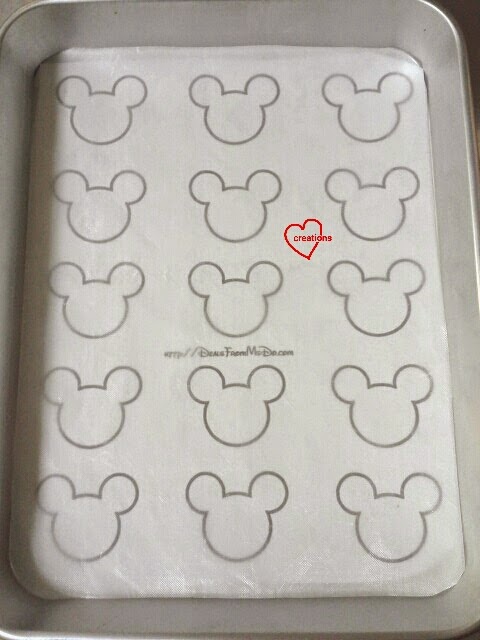 2. Beat the remaining 80g of egg whites in a clean metal bowl until soft peaks form while bringing caster sugar and water to boil in a small saucepan without stirring. Make sure that the egg whites don't get beaten beyond the soft peak stage. Keep the beaters at low speed until syrup reaches 115°C.

3. Turn the mixer speed to high and carefully pour the syrup down the side of the bowl slowly, avoiding the beaters. Keep beating for another 10 minutes at medium-high speed until the meringue cools and stiff peaks are formed (second picture).

4. Add one-third of meringue into almond mixture and mix until well combined. Add the remaining two-thirds of meringue in two additions, taking care to press the meringue into the mixture while folding it. When the batter reaches a consistency that is right, I.e. falls off the spatula in a slow, continous lava-like motion, stop folding. This takes practice and is the most tricky part of making macarons. Watching video demos several times is helpful to get the idea of what is the correct consistency. (Update 20/8/2015: do checkout my video tutorial for macaronage and testing of batter consistency)


5. Transfer batter into piping bag fitted with a 5-8 mm tip. Pipe the large round circle for the head, followed by two small circles for the ears. Lightly tap the tray on the table to remove air bubbles (fourth picture). 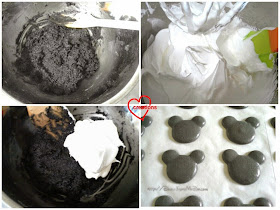 6. Let the macarons dry until the surface is dry to touch. I left the trays of macarons to dry in an air-conditioned room for 2 hours. This is important. If the shells are still sticky to touch, do not send them into the oven. Bake the macarons at 140°C for 17-22 minutes at the second lowest rack of the oven. Let it cool for 5 minutes on the tray before removing them. 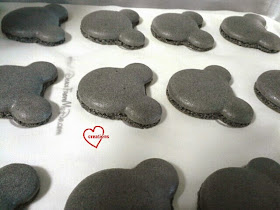 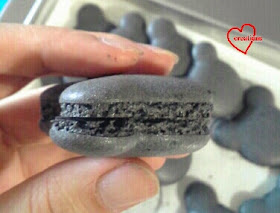 Check out the feet!

* You may prepare the royal icing using raw egg whites or royal icing premix. You may also choose to prepare one batch of royal icing, then set aside about 1.5tbs of icing for white and colouring the rest red. I prepared both colours separately as I wanted to use as little artificial red colouring as possible so the natural ingredients have to be added in near the beginning of whipping the icing.

Steps:
1. Sift icing sugar and meringue powder into mixing bowl and let the electric mixer mix at low speed for about a minute. Add water and gradually increase speed.

2. Add in beetroot powder, sifted red yeast powder and red powder coloring and continue to beat for several minutes at medium high speed, adding water a bit at a time as necessary until the right consistency for flood work of icing. I.e. any peaks on the icing disappears after several seconds and the consistency is like thickened cream. Add red gel colouring if desired shade of red is not yet reached.

3. Transfer the royal icing into a piping bag fitted with a Wilton #2 tip (or cut a small hole in the bag). Begin by piping Minnie's bow. Pipe 2 heart shapes at the forehead with pointy ends touching each other. Pipe the red semi circle for both Mickey and Minnie. Finally, pipe the red circles for the center of Minnie's bow. This is piped last so that the heart shapes have time to dry and this gives the bow a better defitinion. 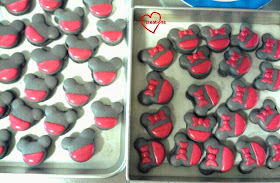 4. You may air dry the maracons but I prefer to dry in the oven at 70°C with the fan on while I prepare the white icing. Mix the royal icing premix with water. Add water until desired consistency is reached. If at any point the royal icing becomes too runny, just add more icing sugar. Stir the mixture for several minutes with a teaspoon. This volume is too small to use the electric mixer.

5. Transfer the white icing into a pioimg bag. Snip off a small bit and pipe small dots for Mickey and Minnie. Air dry or oven dry the icing. 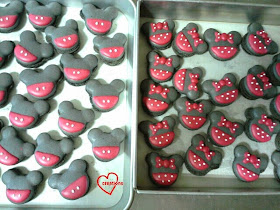 You may store the macarons in an airtight container when the royal icing has dried completely or continue working on the filling. Getting tired by now!

Steps:
1. Scrape off cream filling from Oreos. Crush the cookies in food processor or do it the primitive way (but less washing up) like me. Place cookies in a ziplock bag and use the flat side of a meat tenderizer to hammer the cookies until finely ground.

2. Using a whisk attachment on electric mixer,  beat egg yolks and vanilla extract until pale and creamy on high speed for about 10 minutes.

3. After the egg yolks have been beaten for a few minutes, heat up water and sugar in a small saucepan until it boils. Simmer until temperature reaches 121°C.

4. With the mixer on high speed, slowly pour the syrup into the creamed yolks in a steady stream but away from the beaters. Continue beating at high speed for 10 minutes until cool (picture on the left).

5. With the mixer on medium speed, add softened butter and shortening a cube at a time allowing each piece to mix in before adding the next one. Beat at high speed for 2 minutes. Add crushed oreos and beat for another 2 minutes (picture on the right). 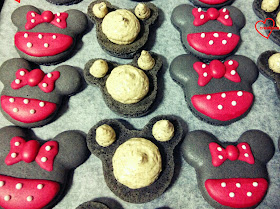 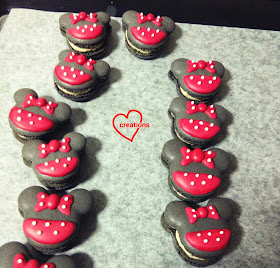 Refrigerate the macarons in an airtight container for at least 24 hours before serving.  They can keep in the fridge for a week or more.

I still find it a challenge to make macarons but it is so satisfying to see the handiwork at the end of all the hardwork! 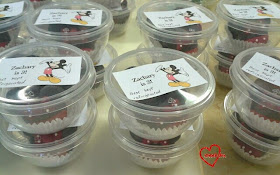 All packed and ready to party! Many thanks to Susanne for printing the stickers!

Do checkout my updated version of this macs with the use of more natural ingredients to colour the shells black and change in shell-drying technique.