I made a longevity peach pandan kaya gula melaka cake for grandma's birthday! What a mouthful to say :p. All 12 peaches are mini snowskin mooncakes with lotus paste filling :). 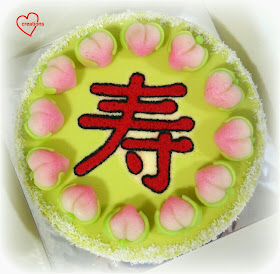 This is one of those bakes where I decided to change design halfway so I will provide the recipe for how I would have done it. It is basically almost the same recipe as my previous longevity peach pandan kaya cake with a few modifications and the replacement of some sugar with gula melaka. I will highlight the changes here but will not replicate parts of the recipe that is exactly the same. My previous pandan kaya cake was endorsed by a pastry chef so of course I will use the same recipe again :p. Now that I have added gula melaka into the cake, it is even more delectable!


Sequence of making the cake:

My kids helped to prepare this!

My original design was a 10" square cake. I decided to change it to a 9" round one like my previous bake. This can be baked ahead of time and kept in the freezer after wrapping it well. 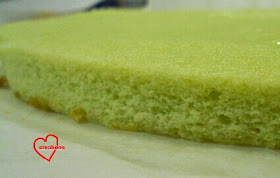 Due to the design change, I cut the patterned cake to reveal the "寿" without a black border. I changed the source of red colouring and portion to avoid too much cake wastage. See the change in recipe below*. 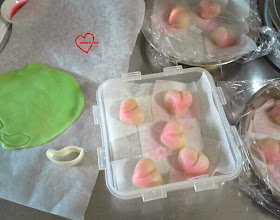 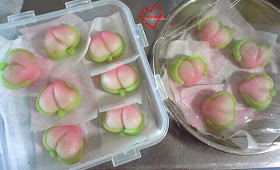 I used the updated snowskin mooncake recipe which stays soft for a longer time. See below for the recipe**.

My original recipe had no gula melaka added. This addition would enhance the flavour of the cake. See below for recipe***. 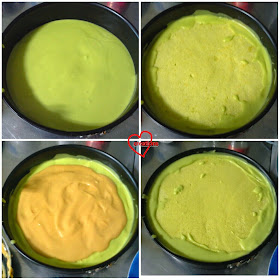 The assembly is almost the same as my previous cake, except that I added a sandwich layer of gula melaka fudge between the 2 pandan chiffon cakes. The gula melaka fudge (3rd picture) is topped with a layer of pandan kaya fudge before putting the second pandan cake on top (4th picture). 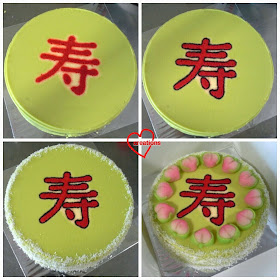 After unmoulding the cake, I outlined the word with charcoal powder dissolved in some water to make the word stand out more. Dessicated coconut is applied only to the sides of the cake this time.

Steps:
1. Preheat oven to 160°C. Position rack to second lowest position. Place inverted "寿" template under a greased silicone mat in a 6" square pan. You may use baking sheet instead of silicone mat but the pattern may wrinkle a bit.

3. Scoop out 1.5 tsp of egg yolk batter and mix well with red colouring ingredients. Prepare one portion of meringue by beating an egg white until stiff peaks form with sugar and cream of tartar. Fold in 5 tbs of meringue into red batter in 3 additions. Transfer to piping bag with wilton #5 tip and pipe out the pattern. Try to pipe a thick layer to ensure good transfer of colored batter to base cake.

4. Bake for 1.5-2 minutes or until dry. Prepare another portion of meringue and fold into main batter together with any leftover meringue for the red batter. Pour over red pattern and bake for 13-15 minutes or until skewer comes out clean.

5. Immediately remove from pan and cool with a fresh sheet of baking paper covering it. Cut out the word from the cake using a small knife.  You may freeze the cake if baked in advance. Just make sure that it is lined with baking sheet, cling wrapped and stored in airtight container/ ziplock bag.

Steps:
Refer to my longevity peach snowskin mooncake post for making the snowskin and assembling the mooncakes using heart shaped ice cube tray. Use 9g of snowskin and 7g of lotus paste filling for each mooncake. Colour the remaining snowskin green for the leaves and stem. You may end up with a bit of extra snowskin. Remember to secure the peaches to the cake with toothpicks.

Begin by preparing pandan water. Boil a few pandan leaves cut up to small pieces in 1L of water. Remove the leaves. You may choose to replace all the sugar with gula melaka for a stronger flavour and retain the natural brown colour instead of using food colouring. I wanted the peaches to be resting on a green field (not on browned "grass") so I still used white sugar and some food colouring.

Steps:
1. For both types of fudge, mix (B) well and set aside. I find it helpful to prepare this in a jug that I can pour from.

2. Mix (A) in a saucepan and bring to a boil, stirring continuously. Use medium low heat.

3. Stir (B) as the powder would have settled. Gradually pour (B) into (A) and keep stirring. Cook until mixture thickens.

I prepared the gula melaka fudge first then set aside, stirring it now and then as I worked on the pandan kaya fudge. If you find it too lumpy, reheat the fudge and stir until it is smoother. 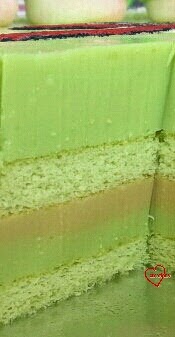 The cake was light, refreshing and not too sweet. For those of you with a sweet tooth, you may want to increase the amount of sugar. But the older folk in my family prefer it this way, not too sweet :).

Update: Checkout my updated recipe for Pandan kaya gula melaka cake over here! I made two logcakes of this flavour and both were very well received!