This very simple "bake" serves two purposes - to clear off my cooked glutinous rice flour stock after all that snowskin mooncake making and for my family who loves this traditional Chinese sweet. We usually buy soft cakes from a nearby supermarket or from a shop that sells Chinese pastries and confectionary (大中国). I didn't know they were so simple to make until I saw Ann Low's beautiful post for QQ steamed soft cakes.

Although this is my first attempt and I improvised a lot from Ann's recipe, what with me not being willing to invest in ingredients that I don't have and don't normally use, the cakes turned out really good! Hubby who had this since he was young said that the texture is very good, soft and chewy. Softer than those sold in supermarkets but not as sweet! My little one kept asking for more. I am personally not a fan of soft cakes but I must admit that the texture is really good. Presenting my amateurish looking but yummy rainbow soft cakes! 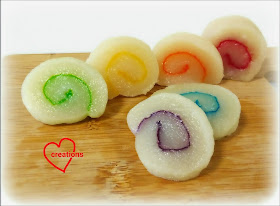 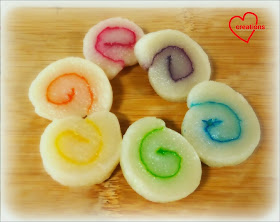 Traditionally, soft cakes only have red colored swirls. I decided to have fun with my collection of 6 mini loaf pans and colored each cake a different color :).

Ingredients:
113g cooked glutinous rice flour or kou fen (糕粉)
30g wheat starch
11g tapioca or corn flour
95g sugar (I used 90g but some may think it is not sweet enough.)
210g water (boil a few pandan leaves in 300g of water and leave to cool. Or if you are lazy like me, just use 1 tsp pandan flavoring.)
1 tsp banana essence (I used 1/2-3/4 tsp of strawberry essence)
Liquid food coloring diluted in some water (about 1/8 tsp of coloring in 1 tbs of water)

Steps:
1.  Sift flours into a big bowl and mix well with sugar.

2. Pour pandan water with essence into the dry ingredients and stir with wooden spoon to form a thick paste. Let it rest for 15 minutes before stirring until smooth and not lumpy (a couple of minutes of stirring will do).

3. Grease 6 mini loaf pans (2x4") or one 8" square pan with vegetable oil. Pour the thick paste into the pans. Smoothen out the tops of the batter by covering the surface with a cling wrap and pressing with your fingers (the paste is very sticky). Steam for 13-14 minutes.

4. Once removed from steamer, immediately brush on coloring. 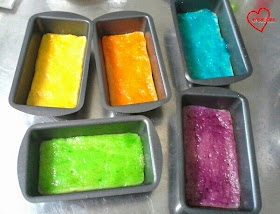 Notice that red is missing? I wasn't sure that my experiment would work so I steamed one first.

Let the cakes sit in the pans for 10 minutes before rolling into cylinder. Remove from pan.

5. Roll the cakes in extra kou fen. Coat evenly and shake off the excess flour.

6. Grease a knife with some vegetable oil and cut the cakes to thickness of your liking. 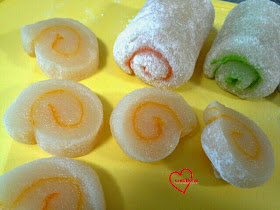 Store in airtight container. You may want to place baking paper between layers of soft cakes as they will stick to each other. To prevent the cakes from sticking, you may coat the cut surface with cooked glutinous rice flour but I didn't do that as I wanted the cakes to retain as much moisture as possible.

The cakes were still very soft the next day! Will update on whether it is still soft after a few days.

Update: According to Ann, you can spread a thin layer of tau sar instead of food coloring before rolling the cakes. In fact, you can experiment with any spreadable filling of your choice :). The cakes remain soft after 3 days but in Singapore's hot and humid climate,  it starts to get mouldy on the fourth day so do consume it within 2 days.